As we inch towards the end of 2016, we'll see the usual lists of news highlights from the year, including the crises that captured our attention. Here are some of the biggest stories that didn't make the news - the international crises that were crowded out, forgotten, or ignored.

Not only do these crises cause human suffering, they also remind us why sustainable development is crucial: to help vulnerable people get back on their feet as quickly as possible and to achieve the Agenda 2030 goal of ending extreme poverty.

Putting the spotlight on these crises is often the first step to mobilising political action, financing and other international support to resolve these crises.

These are the 'invisible majority' of people displaced globally. Of the 65 million people forcibly displaced worldwide, a record 40.8 million--or more than six out of ten--are displaced within their own national borders. These people have fled for many of the same reasons as refugees: to escape conflict or violence, persecution or environmental degradation. But since they have not crossed an international border, they are excluded from the specialized international protection given to refugees. This is why UNDP, the Office for the Coordination of Humanitarian Affairs (OCHA), the International Rescue Committee, the Norwegian Refugee Council and the Special Rapporteur on the Human Rights of Internally Displaced Persons released an open letter in September, calling on leaders to live up to their responsibility to protect and assist the internally displaced. We must tackle the issues that lead to displacement and give internally displaced people access to services, social protection, jobs and dignity. 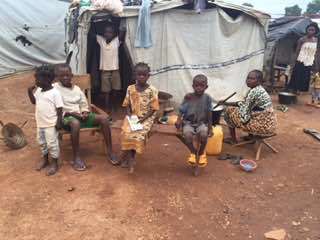 Here we've seen a devastating double punch of Boko Haram-related violence and chronic food insecurity. More than nine million people need humanitarian assistance including 6.3 million people who are food insecure at "crisis and emergency levels". Now Boko Haram is targeting civilians with raids and suicide bombings. The region also faces an environmental catastrophe, with Lake Chad losing around 90 per cent of its surface area over the last 40 years due to climate change and other factors.

3. Democratic Republic of the Congo

Few crises are as drawn-out and complex as in the Democratic Republic of the Congo (DRC), after years of armed conflict, sexual violence, widespread poverty and abuses against civilians. Recently, the UN has reported a further deterioration in food security, child health, access to clean water and other indicators. At least 49 people were recently killed during a demonstration on 19 September 2016. Development grinds to a halt in any area with such protracted conflict.

If you were born in the Central African Republic (CAR), your average life expectancy is just 50.7 years, according to UNDP's Human Development Index. On top of that, violent conflict over the last few years has left 2.3 million people in desperate need of humanitarian assistance. The volatile security situation could undermine any small steps forward in development in recent years and jeopardise the country's chances of achieving the Sustainable Development Goals. But there are opportunities for recovery and peacebuilding, with more than USD 2.2 billion pledged at an international donor conference in Brussels last month to boost security and support health, education, economic opportunities for women and girls, and food security.

The conflict in eastern Ukraine has dragged on for two years now. It's already forced the closure of mines, factories and other industries and people are sliding into debt after exhausting their savings. In the non-government controlled area, six in ten households now rely on the pensions of retired relatives to survive. In the government-controlled area, more than one in three of the internally displaced and one in four of those still in their homes earned no income over the last month.

These are some of the biggest underreported stories of 2016; there are many more. Of course it is primarily up to political leaders to resolve or prevent conflict. But agencies such as UNDP can also work with governments to create job opportunities, improve peace and security and social cohesion and maintain basic services such as electricity and water.

This type of development response helps to prevent future crises and ensures more people move out of poverty and into a life with dignity.

So let's all make a New Year's resolution to squeeze some space into our news bulletins and social media feeds for the underreported stories. Because very often, no news is far from good news.