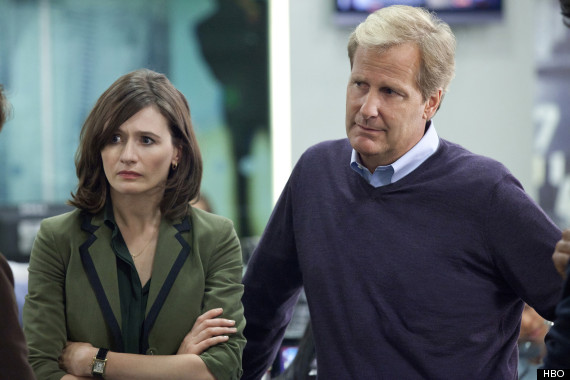 "The Newsroom" (premieres Sun., June 24, 10 p.m. ET on HBO) is one of the more compelling pilots I've seen in a long time -- but not for the reasons most fans of Aaron Sorkin's previous work might think.

"The Newsroom" is different. Honestly, I think it's one big difference in particular that's catching a lot of TV critics off guard.

Unlike "The West Wing," "Studio 60 on the Sunset Strip" and "Sports Night," "The Newsroom" doesn't make viewers work so hard. It's still very much an Aaron Sorkin show -- which, if you're not familiar, involves quick dialogue, long monologues and a good amount of the walking-and-talking scenes he's become famous for -- but it's one that requires little to no Googling after you've watched an episode. It's still TV that'll make you think, but you don't have to, and that's the point.

Unless you're a major political junkie, a Hollywood insider or someone intimately familiar with the inner-workings of sports broadcasting, the rapid-fire jargon and weekly storylines of Sorkin's aforementioned TV shows were often just a bit (or, be honest, a lot) over viewers' heads. But with "The Newsroom," which takes place behind the scenes at a cable news show, viewers have a very distinct advantage: We've already seen this news.

Without giving away too many spoilers -- half the fun of each episode is figuring out what event from 2010 or 2011 they might touch on -- I will say that each episode finds the "News Night" team scrambling to track and report on a big breaking news story from about two years ago, kicking off with the BP oil spill in the gulf in the pilot episode.

Knowing that most TV viewers have limited knowledge of how the stories they see on the news actually come to be on air, and realizing there would be a learning curve of sorts to get in the groove of that process, Sorkin made the smart choice to set the show ever-so-slightly in the past to give us all the edge up. You don't have to be an historian to follow along -- you just have to have had access to a television, computer, newspaper, or really any human contact in the past two years to know what real events this fictional news team is tackling.

When I approached Sorkin with this theory, this compliment of sorts, at the Los Angeles premiere of "The Newsroom," he had a very thoughtful answer that I think is important to keep in mind while watching: "I'm doing it in the past because I didn't want to make it fake news. I'm doing it in the past because it is fun for the audience to know more than the characters do. There are exciting moments to re-live and see how the people who got the news first and gave it to us got the news."

On one hand, I understand the critique that Sorkin chose that timeline device to appear smarter still than the average reporter or newscaster. Where they might not have pounced on the oil spill at first, Sorkin's TV team digs until they get to the heart of the matter, before it's even technically being called a disaster. With 20/20 hindsight, yes, having the news team that viewers are meant to be rooting for choose the correct path of coverage seems a little easy.

But on the other hand, "The Newsroom" would be infinitely less watchable and much more preachy if Sorkin had chosen to go the fake news route. Where the show's hero, Will McAvoy (Jeff Daniels in a career-defining role), gets to spout about his own leanings and political ideals in this version, he would've easily become an obnoxious puppet of a man if we were hearing the fictional newsman's fictional views on fictional news stories. Sorry, but that's a lot of fiction, even for a TV show.

Beyond the inner workings of "News Night," there's also layers of corporate bureaucracy; soapbox moments ranging from the effects of reality TV to the existence of Bigfoot (seriously); quirky side stories involving flashes of idiocy from otherwise genius characters; and a room full of smart people who are good at their jobs but couldn't look more bewildered when dealing with personal matters. All of these things are Sorkin calling cards so, to be brutally honest, if they annoy you, every Sorkin show probably will. But give the man some credit with this new twist: Knowing the news before the news people do and then getting to watch the process unfold is fascinating.

The choice to set the show in the very recent past feels less like a "here's how it shoulda/coulda/woulda gone down" Sorkin sermon to viewers and the media and more like a "remember this?" snapshot with a bit more color and background.

It's a snapshot I've enjoyed watching in the first four episodes I've screened, and it's one that I think Sorkin superfans and the uninitiated alike will come to appreciate. If the show is doing its job properly, it'll entertain you. Period. But while it entertains you, it might even make you question what you see on the news today, and how much more there might be to those stories. And while you're thinking, if something's really striking a chord, it just might inspire a change. Would that be so bad?

Want more? Read my interviews with Sorkin and the cast; get scoop on two new characters; read Mike Ryan's interview with Jane Fonda about "The Newsroom"; and read Maureen Ryan's review here.