Mobility will change the balance of developed and developing markets.

There are 3 billion people today connected to the Internet. This figure is set to double in the next 10 years to more than 6 billion users. The majority of these new users will connect via mobile devices and will come from the emerging markets. The next 3 billion will transform the net as we know it.

There are several drivers of this trend. First, inexpensive smartphones are now proliferating in more markets. Xiaomi, for example, has grown to a handset company valued at $45 billion in just a few years by selling tens of millions of low-cost Android smartphones. China today has more than 600 million smartphone users and India more than 200 million. These numbers will both double in the near future. About half of all Internet users today are in Asia.

The second driver of universal connectivity is cheaper access to bandwidth. Mobile broadband is now proliferating in many countries and is particularly popular in countries that never developed a strong landline infrastructure. Many developing countries are deploying a mix of wireless solutions that will bring the majority of its citizens into the net within the next decade. 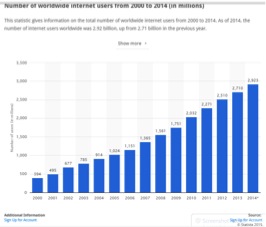 Facebook and Samsung have launched initiatives such as Internet.org that aim to connect every person on the planet. In fact, the last billion people to have joined the net are already showing us the trend of the rise of developing countries on the net.

What are the implications of going from 3 billion to 6 billion net users?

First, women gain empowerment using mobile and connected platforms. Many women in developing countries still suffer from lack of access to education, banking and other key services. Mobile net access can change all that. Services such as m-pesa are bringing mobile banking to hundreds of millions and giving women control over their finances.

We know from the microfinance sector that women obtain more than 80 percent of microfinance loans in developing countries and that this has been a significant tool of empowerment for women. These entrepreneurs are now using mobile access to further their businesses through both payment technologies and accessing marketplaces such as etsy.com. Many entrepreneurs are using mobile access to obtain loans directly from kiva.org and other direct lending sites.

Transformative education is another exciting prospect of universal connectivity. With smartphones, users in markets with poor educational systems can tap into the leading universities of the world and gain new skills. While the promise of the MOOCs has been an exciting one, most of the current MOOCs have not yet crossed over to service these larger developing markets. Current stats show that MOOCS are still being predominantly used by individuals who already have access to many educational resources.

More work is needed to adapt these courses to local markets and to engage these markets. Once this barrier is crossed, millions of users will be able to join the knowledge workforce. This will create even great competition globally for knowledge workers.

Health care is a third area that will be impacted greatly with universal connectivity. New forms of telemedicine will emerge that combine human doctors with AI to deliver diagnoses and treatment solutions to millions who remain outside the modern health care system.

The question now is which companies will emerge as the providers of the software and services to these new markets. There is good reason to believe that it may not be exclusively the current large players. Keen investors will find teams who understand these local markets and can deliver services at scale combining resources from developed and developing countries.

We are undergoing a once in a century transformation and this is the opportunity to scale many new services that will improve the lives of billions in the near future.