How did you get into music?

I, very luckily came from a very musical family. I grew up around house parties and get-togethers where eventually, the night would turn into a huge jam session. I have an aunt and uncle who play in a band together, all of my cousins play guitar or drums or something, my brother (who's no doubt my biggest influence) has always been a die-hard bass player. My grandmother was the best, though. She'd get behind the upright piano with her scotch resting on top, pass out sheet music of showtunes to the family, and just play for hours as everyone hollered along. So as far as starting to play music, it had to be around 5 or 7 when I first started messing with singing and guitar. By the time I was 13, I really dove into the instrument. I spent hours, literally HOURS, just jamming in my room. I'd get a new favorite band, learn as much as I can by playing their songs, and just woodshed the hell out of it. I also had a few friends who played instruments as well so we did the required garage/basement bands all through junior high and high school. We were right on the cusp of tape trading and being underground with my high-school band, Arise/Aethyr (we couldn't settle on a name). We actually passed out cassette tapes of our music that we recorded at home. And this was BEFORE tapes were ironic and cool!

What's the hardest part of being an independent artist?

The hardest part for me is sheer economics. It's really hard to stay afloat financially while pouring everything you have of your heart, soul, and wallet into a project. The casual music enthusiast tends to overlook how much is really needed to get the music they're listening to into their iPod/phone/whatever. Because the gigs and merch sales only pay so much, this usually means having to take on a day job, full-time or otherwise, and that just taxes your energy and body even more. It's sad to say that finances have such a big effect on the artistry, but it's a butterfly effect. The other side of the coin on this issue is that publicizing yourself has become easier than ever. With social media being as big as it is, you can reach a huge amount of people pretty easily. It all comes down to heart and drive. If you have those two, you can overcome any obstacle life throws at you.

What have been the biggest hurdles you've faced getting to where you are?

Really, I can narrow it down to one thing: self doubt. That's the only thing that ever impeded my progress as a professional artist. It kept me from taking the risks when I should have, participating in self-destructive behavior, and basically just sabotaging my whole career. Things seems to come a lot easier if you just take opportunities when they come up (within reason). I've really been trying to live by this creed for the past couple of years and it has, without a doubt, brought me a lot more success in every realm of my music. I've played at some incredible places, met some amazing musicians, gone on tour working with major-label bands, brought music to children who might never have been exposed to it... I could go on and on. But really, the doubt was my biggest hurdle.

Is it challenging being a gay artist who does rock and roll?. As opposed to pop/dance music? Or has the world changed?

It's definitely different. When I go out and do open mics and coffee houses and things like that, I feel a lot more at ease with the crowd and other artists. This is kind of unfounded though because every time I've had to "re-come-out" to people I've played with in the rock world, most of the response has been "Cool!" or "Really?!", followed by a myriad of almost-too-personal questions. Being gay in the pop/dance world is a non-issue at this point. The LGBTQ community is such a big demographic for those styles of music that I feel like they'd be alienating their audience if they weren't so accepting. The amount of gay artists in those genres is also significantly higher than that of the rock world. Not to say there haven't been huge gay rock icons. Think about Rob Halford (Judas Priest), Freddie Mercury (Queen), Elton John, Michael Stipe (REM), Doug Pinnick (King's X), David Bowie (kind of)... hahaha. They're out there. They're still out there. Hopefully there will be more of a gay presence in the years to come for rock and roll, but unfortunately, a huge portion of rock's main demo lives in areas that are very conservative and still don't accept being gay as... well... a non-issue. Not that it's not important, but to have it come first on someone's judgment about an artist is bullshit. The world is changing but we still have a long way to go.

When did you come out? What were the circumstances?

I came out when I was 21. I was out at a show with a very dear friend of mine seeing another friend's band play. The night was just an exploding point of emotions for me. I couldn't have been in a better place talking to a better person than I was. What really led me to actually come out was myself. I was fed up with hiding. At the time, I had a pretty serious drug problem, due mainly in part to trying to hide from myself. I did that fairly successfully through my teen years, but I was never really happy. I was in fact a very angry person. I knew I was gay. There was no doubt in my mind about that. I was just so afraid of being vulnerable and worrying about what people would think or say about me. I grew up in a pretty small town where everyone knew everyone. On top of that, there is virtually no gay community up here (upstate New York) to speak of. I was never exposed to gay people (in person) and I think that made me have this bigger detachment from the idea that it's normal and totally okay. All of this came to a head that night at the bar. I dragged my friend Dane outside for a cigarette and just said "Dude, I gotta tell you something... ". And he, like, already knew. We talked and hung out into the wee hours of the night and I felt a million times better. After that, I cleaned up my act, embraced who I was, and have been much happier since.

Do you think it informs your music?

It definitely informs or influences my music. I also have such a broad catalog of artists (many of them gay) that I listen to, being gay must work its way into my music. Lyrically, I definitely talk about being in love, loss, struggle, confusion, indecision... My pre-coming out work, when you really look at the words on the page... It just makes so much sense. In my band Dolor (a hard rock band I fronted for 6 years), the subject matter was always very dark. I was talking about the pain I was in and the mental anguish I was going through dealing with being closeted while battling depression and being lonely and drugs and so on and so on... In a way, it's definitely addressing an aspect of the issue. However, after I came out, my lyrical content switched drastically. I wasn't afraid to say how I felt or who I was anymore. I went on to write many love songs with male pronouns, one even being a story about how my then-partner and I met and our ensuing struggle to be together. The funny thing is, in my current songs, I'm much less drastic about bringing the gay element to my music, but it's there more than ever. It comes through still, but it's more of a nod-and-a-wink kind of thing. There's actually a line in a song I'm recording for my new record that says, "It's my favorite song / the city noise / staring at the boys out on the street / They can't compete with what you do to me." It's a pretty clear cut line, but when you're hearing it for the first time at a concert, it's just enough to hit you and have you go, "Wait, did he just say... ?" I love being able to incorporate it like that. Balancing being blatant with coy. It's difficult, but I feel like I can pull it off.

I'm currently working on a full-length album called Truth and Lies. It's a really cool collection of songs that run the gamut from quiet and emotional to dancey and raucous. I'm really aiming to make something you can sit and listen to all the way thru and not get bored. I'm performing all instruments on this record aside from drums, which is pretty much my m.o. 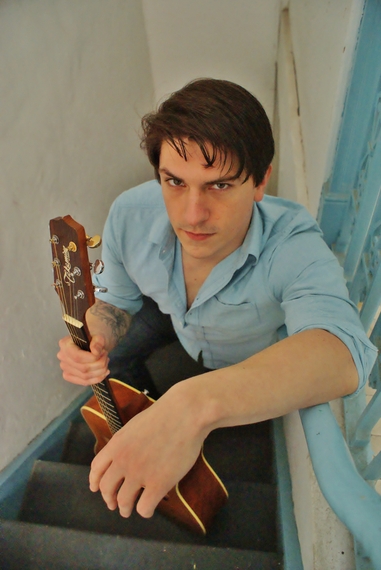