My friend, Ben Horowitz, and I debate the tech bubble in The Economist. This is part one of three.

First, let us start with a definition of a tech bubble.

A tech bubble is the rapid inflation in the valuation of public and private technology companies that exceeds their fundamental value by a large margin. It is accompanied by the rationalisation of the new pricing, and then followed by a spectacular crash in value. (It also has the "smart money" investing early and taking profits before the crash.)

Bubbles are not new; we have had them for hundreds of years (the Tulip Mania, South Sea Company, Mississippi Company, etc.). And in the last decade, we have had the dot.com bust and the housing bubble. This tech bubble is unfolding just like all the other bubbles before it.

Today, the signs of the new bubble are the Linked-In initial public offering (IPO), Facebook's stratospheric valuation and the rapid rise of early-stage startup valuation. Hiring technology talent in Silicon Valley is getting difficult, and the time it takes to drive across Palo Alto has tripled--all signs of the impending apocalypse.

Dr Jean-Paul Rodrigue, in the Department of Global Studies & Geography at Hofstra University, observed that bubbles have four phases; stealth, awareness, mania and blow-off. I contend that we are approaching the early part of the mania phase.

In the stealth phase, prescient angel investors and Venture Capitalists (VCs) start investing in an industry or market segment that others have not yet found. In the case of this bubble, it was social networks, consumer and mobile applications, and the cloud. VCs who understood the ubiquity, pervasiveness and ultimate profitability of these startups doubled-down on their investments. Long before others, they saw that these applications could have hundreds of millions of users with "off the chart" revenue and profits.

Meanwhile, the bubble for "seed stage" startups began when Ron Conway's Silicon Valley Angels and DST guaranteed every startup out of a YCombinator $150,000. And it was hammered home with Color--a startup without a product--raising $40 million, at a reputed $100 million valuation, from brand name VCs who should have known better. When they did launch their product, it was compared to boo.com, and entered the dot.com bubble hall of infamy.

Meanwhile, smart VCs continue to invest in this segment and increase their ownership of existing companies. The technology blogs (TechCrunch, et al.) start cheerleading, and the general business press/blogs start paying attention. And all of the investors trot out explanations of "why -- this time -- everything is different." 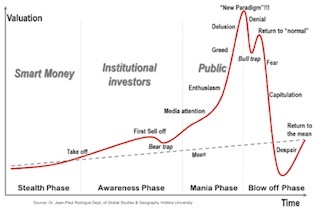 We have just entered the mania phase. The Linked-in IPO valued the company at $8.9 billion at the end of the first day of trading. It sent a signal that there is an irrational demand for tech IPOs. Silicon Valley startups are falling over each other to file their S-1 documents to go public.
Some precursors to the bubble happened when Chinese Internet companies listed on United States stock exchanges. In December 2010, Youku -- the YouTube of China -- went public, with a valuation of $4.4 billion at the end of the first day (on $58.9 million in 2010 sales).

Dr Rodrigue's description of what happens next sounds familiar: "the public jumps in for this 'investment opportunity of a lifetime.' The expectation of future appreciation becomes a 'no brainer'...Floods of money come in creating even greater expectations and pushing prices to stratospheric levels. The higher the price, the more investments pour in. Unnoticed from the general public, the smart money as well as many institutional investors are quietly pulling out and selling their assets...Unbiased opinion about the fundamentals becomes increasingly difficult to find as many players are heavily invested and have every interest to keep asset inflation going."

"The market gradually becomes more exuberant as 'paper fortunes' are made and greed sets in. Everyone tries to jump in and new investors have absolutely no understanding of the market, its dynamic and fundamentals...statements are made about entirely new fundamentals implying that a 'permanent high plateau' has been reached to justify future price increases."

We are seeing this bubble unfold by the book.

No one doubts that social networks and web and mobile applications are reinventing commerce. Obviously, some of these companies will have hundreds of millions of customers, unprecedented revenue growth and great profits. Yet none of these companies have earned the valuations that they are receiving. For all of these reasons, I believe this House should vote in favor of the motion before it.