Born and raised in New York City, you attended the publicly funded Hunter College Elementary and High Schools for gifted and talented students. How did this play into the person you are today?

Getting a fantastic free education with a really diverse group of kids, who all felt lucky and privileged to be there, was an amazing environment to grow up in. Hunter's open campus encouraged independence and fostered sensitivity and acceptance of others. I grew up with a good balance of being pushed when I was younger, but knowing that if I messed up, it was okay.

Is there one individual or experience that had a significant impact on you and your commitment to making a difference?

The summer I was 15, I spent a month volunteering in Costa Rica as part of my school's community service requirement. It was the first time I had left the country. The first time I'd flown by myself. The first time I'd done anything without a friend. The one week we spent doing home stay in a rural village probably had the biggest impact on me - it was informative and instructive to be in a place that was so different from where I was from. I was embarrassed about everything that I had. That sort of self-awareness is important.

While an undergraduate, you worked as a volunteer for CityStep, the student-run performing arts partnership between Harvard University and the Cambridge public schools. Why did you get involved?

As a kid I was rule-bound, but in college I began to overcome my shyness, to break out of the Harvard bubble and get involved in the community. Through CityStep I'd visit public schools twice a week, sometimes during the day, sometimes after school. The program offered a creative outlet for kids, but also promoted teamwork, cooperation and gave every kid a voice. The year's efforts culminated each spring with a full-length public performance. It's a full year commitment for undergrads, no ifs, ands or buts. For me, and many others, it turned into a top priority.

How did you extend your commitment to CityStep beyond your four years at Harvard?

My goal was to set up the Harvard-based program at the University of Pennsylvania. Three years ago, right after college, I moved to Philadelphia where I recruited undergrads to work with students at three middle schools. I won't know if it's successful for another few years.

So how did you get involved in Garden In Transit?

I responded to a job on CraigsList! It was the best job I've ever had. Beginning in September 2007 and until year's end, New York City's taxis were transformed as part of an art, education and creative therapy project under the direction of brothers Ed and Bernie Massey. The taxis are just one of a number of Portraits of Hope projects developed for seriously ill and physically disabled children. Over 27,000 people, mostly kids, painted the flowers. 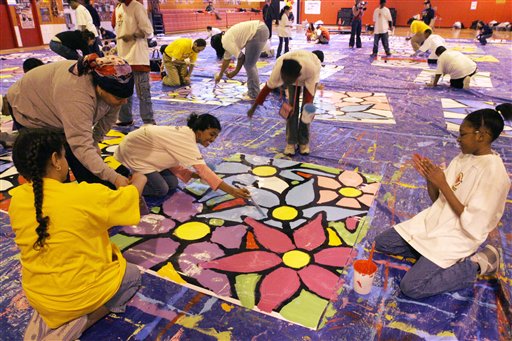 What drew you to social entrepreneurship?

A fellowship thanks to StartingBloc changed my life. I honestly didn't know what a social entrepreneur was until then. I didn't know about the fourth sector, using business for social good [for more information, read Stephanie Strom's New York Times article "Businesses Try to Make Money and Save the World"]. The idea really resonated; I'd been disillusioned with nonprofits and the fund-raising model. They are forced to fit into our capitalist society but I think that integrating social and environmental goals into business is the way of the future. It shouldn't be that half of the economy screws things up and the other half saves.

Where do you go from there?

Grad school, especially business school, will give me the tools I need to make a difference. Stanford is the right place for me, given the surrounding area's entrepreneurship and green initiatives. I'm more interested in changing established ways of doing things for the better than coming up with a brilliant idea from scratch. One of the main things I learned through Garden in Transit was that instead of asking people for donations, you could frame the fundraising as sponsorship in exchange for a naming opportunity. I've learned that working with big companies, within the framework instead of against it or trying to supplement it, seems the most productive.

Now that you've had a taste of the left coast, California or New York?

I thought it would be educational to shift my center of gravity, closer to Asia instead of Europe. [But] It kills me that I need to get in my car to buy milk. I'm trying to remain open-minded.

My dream job was to be head of the Ford Foundation and then I got off the non-profit model. I'm leaning toward becoming a Vice President of Corporate Social Responsibility to a large corporation, like Coca-Cola, one that has a huge impact and isn't doing all that it can do to temper social/environmental issues. I'd like to channel the company's efforts in productive ways. Wal-Mart is a good example of one that's on the right track.

Advice for others who want to get involved?

Start by integrating something socially responsible into what you're already doing; help start a project, or volunteer. Buy a nalgene bottle, switch your light bulbs and be conscientious about recycling. There are lots of organizations doing great things which can use your support. An example is kiva.org: if you have an extra $100, lend it to them. What you do doesn't have to be life-altering or to come from a purely altruistic person -- every one of us can make a difference.