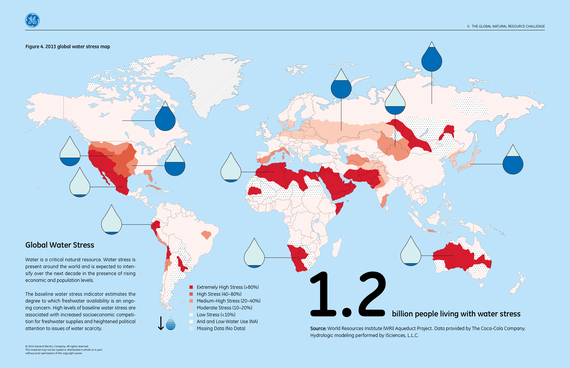 "Some call me nature. Others call me Mother Nature. I've been here for over four and a half billion years. 22,500 times longer than you. I don't really need people, but people need me. Yes, your future depends on me. When I thrive, you thrive. When I falter, you falter. Or worse. ..."
NatureSpeaking video by Conservation International & HP

Kudos to Conservation International and HP for its terrific short video of Mother Nature admonishing her "children" to clean up their act. Some of the planet's most clever innovators are heeding Mother Nature's call and ushering in the next generation of clean energy solutions, and the jobs and profits that come with them.

It's a huge opportunity. As Heidi Vangenderen, Director of Public Engagement and Outreach of the Department of Energy told the 2014 Clean Tech Open SE audience: "According to the Energy Information Administration, global energy infrastructure will almost double by 2040, which could represent up to $11 trillion cumulative investment since 2013. There is money to be made in every aspect of evolving our energy economy."

Two leading conferences the past couple of weeks -- Greenbiz's Verge San Francisco 2014 (four days) and the Clean Tech Open Southeast 2014 Regional Summit in Alexandria, Virginia (one day) -- provided a glimpse into the clean energy future, with big company intrapreneurs, who take a "process-driven" approach, and entrepreneurs, who take more of a "just do it" approach.

Here are six takeaways from experiencing both conferences back-to-back:

1. Integrate infrastructures as we upgrade them: We've been reinventing the current grid system to make it more resilient and less at the mercy of weather events and accidents, including with micro-grids. At the same time, we need to make sure these systems can "talk" to each other and back each other up. As Peter Kelly-Detwiler, a former S.V.P. at Constellation Energy and a well-regarded energy consultant (and Forbes contributor), said at Verge:

"There is still one big element missing: the integration function that stitches this all together in an economically efficient way. There is no overall allocation function that optimizes the performance of ALL assets on the power grid...An ideal grid would have resiliency and redundancy built in, with multiple distributed assets that are optimized according to local grid conditions and costs."

2. Make power visible in real time to reduce use: According to GE Ecomagination's new Digital Resource Productivity report (released at Verge), the marrying of hardware with software on a highly integrated level will accelerate the reduction in the use of resources. Kelly-Detwiler noted, however, that for "real" efficiencies to occur, the consumer needs to see their power use in real-time. Right now, he added, it's like buying gas for your car without being able to see the price and suddenly getting a bill a month later to discover that you spent $8/gallon.

3. Big Data is nothing without humans: Harnessing Big Data is critical, but, "Big data is good at certain things ... but not at determining causation and for that you need humans," said Emma Stewart at Verge, head of Sustainable Solutions at Autodesk.

4. There are many more jobs than skilled people to fill them: Speaking of humans, GE Ecomagination Global head Deb Frodl said at Verge that, "The gap in talent (in managing the big data piece of the clean energy economy) is about 1.5 million people." GE cited the McKinsey Global Institute report of 2011, which states that, "By 2018, the United States alone could face a shortage of... 1.5 million managers and analysts with the know-how to use the analysis of big data to make effective decisions."

5. The opportunity in the historic water risk: There is a global water shortage with 1.2 billion people living in water stress, including in California, so we must learn to do more with less. Dow Water is one of the companies working aggressively to provide clean drinking water, and clean-enough water for other household use before it's too late. "Incoming water is getting worse or in some cases not at all available," Dow's Global head of Water and Power Snehal Desai told me on my radio show Green Connections™ at Verge.

And so a lot of companies now are getting very aggressive in how they reuse water, how do they become more efficient with the water they have." One successful small company working on this issue is Clean Tech Open Southeast 2012 winner Micronic Technologies, founded by Karen Sorber, which is a start-up that developed a water treatment system that even purifies water from fracking.

6. Transportation is ripe for innovation: At Verge, GE's Frodl talked about their "Flight Efficiency Services," which they say can save fuel and emissions (e.g., a Brazilian airline saved an average of 77 gallons per flight and reduced CO2 emissions by 1,628 pounds per flight, per GE).

Two noteworthy CTOSE start-ups in this space are 2014 CTOSE winner NG1 Techno Exhaust, whose technology literally cleans exhaust before it reaches the air; and electric bicycle CTOSE finalist Riide, which just inked a deal to sell their bikes in Kenneth Cole stores. (I spoke with them on Green Connection too.)

It's clear we need a combination of science, data, ingenuity, risk, collaboration, passion and funding to put this clean energy revolution into overdrive to create jobs and turn "real" profits, including for the environment.

That's good business, no matter where you sit on climate change or energy policy.