There is an emerging Greek tragedy. Not the familiar and ongoing financial troubles concerning Greece and the EU, but rather a catastrophe on a truly worldwide scale: an emerging mass extinction of life - the sixth such crisis in Earth's history.

A new report has determined that in the past four hundred years the extinction rate of vertebrate animal species (mammals, birds, reptiles, amphibians, and fish) has been more than 100 times higher than the prior fossil record history. That suggests an extremely rapid loss of biodiversity in a short span (in geologic terms) and an ongoing loss of biodiversity on par with the greatest crises in earth history.

Birds are a grim part of the story, with some 80 known extinctions (other estimates suggest nearly 200 species lost) in the past four centuries. The Passenger Pigeon, Dodo, and Great Auk are well known to us. Most of the losses have been of obscure island birds. 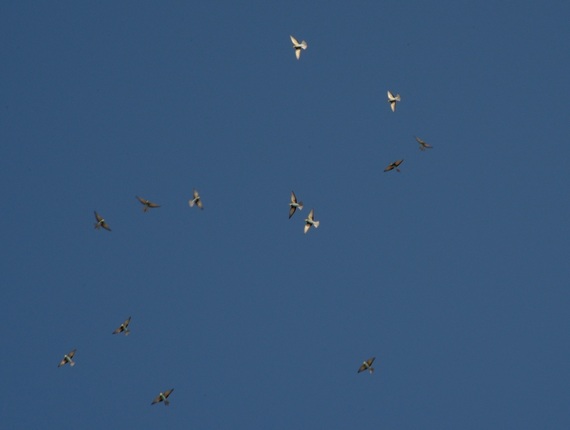 Geologists divide up Earth's history into formal "Eras" and the terminology is Greek. Hence Paleozoic ("ancient life"), Mesozoic ("middle life") and the Cenozoic ("recent life"). Transitions from Era to Era, and of the Periods within them (and of the Epochs within the Periods) are defined by conspicuous and widespread turnover among fossil groups and (later) the emergence of new forms.

Three other mass extinctions were at the end of the Ordovician Period at 444 mya, killing most sea life; the Late Devonian of 359 mya which saw the end of armored fish and the coral reefs of the time; and the Late Triassic of 201 mya, ending ammonites and most mammal-like reptiles (a group that later gave rise to mammals) among others.

Species come and go in the fossil record, but the above episodes represent the five most dramatic times of demise and transition in the history of life. 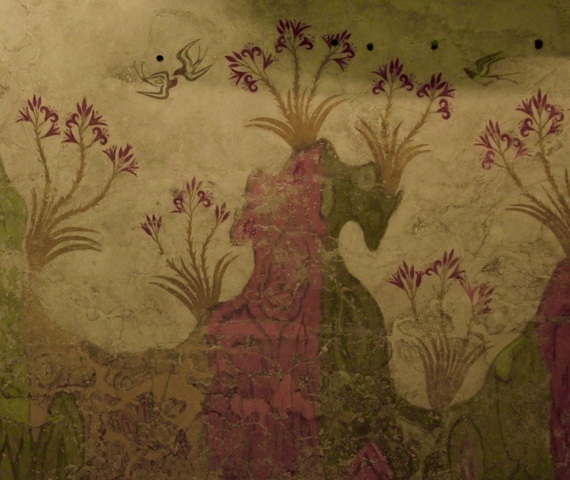 This wall painting survived from the pumice and ash that covered Akrotiri because of the Santorini volcanic explosion. It depicts the countryside and flowers with migratory Barn Swallows flying overhead. From a display at the Museum of Prehistoric Thera. Photo by Steve Zack.

The causes of the five known mass extinctions are varied, not fully understood, and still being debated and researched. It is clear, however, that in the causal mix are the ongoing movement of continental plates (with associated immense magma flows, volcanic activity, and noxious gas releases) as well as the creation or elimination of shallow seas. Dramatic shifts in climate are also implicated.

The end-Cretaceous is now recognized to have been largely the result of a huge meteorite, which in turn caused considerable volcanism, magma flow, and a precipitation of darkening ash over much of the planet. Some geologists feel that meteorites and asteroids may have played a role in other mass extinctions.

I recently had a chance to learn and see something of the historic havoc created by a huge volcano on the island chain of Santorini in Greece. There, during 1,650 B.C., the third largest volcanic eruption in human history occurred.

This tumultuous event likely gave rise to the mythology of Atlantis, as described by Plato and involved the fury of several Greek gods. Some seven cubic miles of magma erupted, with an ash plume likely 36 km high. The large amount of erupted magma resulted in the collapse of the volcano and the creation of a caldera, visible today.

The collapsed volcano created an immense tsunami that devastated the northern shoreline of Crete 100 km to the south. The obliteration of Santorini and the tsunami's effects on Crete weakened the existing Minoan civilization sufficiently that it met its demise at the hands of the Mycenaeans from the north. 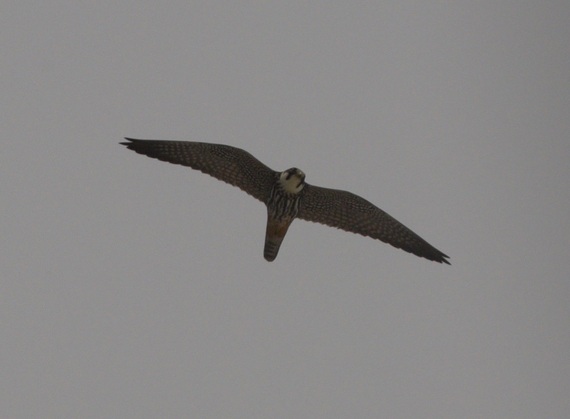 Yet as dramatic as Santorini's volcanic eruption clearly was, it resulted in no large or small extinction episode. It was a regional event that at best caused some short-term climate effects in China and possibly Egypt.

The mass extinction emerging now, in contrast, is on a global scale with growing impacts to life on our planet. It is a catastrophe of our civilization's making, evidenced by widespread obliteration of species and profound climate change. Indeed, it is a Greek Tragedy and we are actors in this grim play.

Yet this play remains unfinished. All Greek tragedies require a catharsis (Greek katharsis), resulting in an awareness and confrontation that can lead to renewal and restoration. What remains to be seen is whether such a collective cleansing and action will come from our civilization in the last Act.