Sooo, I moseyed on over to a panel discussion up at UH Manoa, entitled, "Coexist or Die." I figured at least they were bringing together various movement activists, so it looked like they were working toward the "coexist" part, and trying to avoid the "die" part. "Fairly optimistic intentions there," I thought. I'm a congenital optimist like the guy with the funny name and big ears who thought he could be President one day. So, perhaps I tend to appreciate a little hope for change being publicly exhibited more than most.

What follows is a snapshot. All 20ish types. Not a definitive top ten list or anything. However, what I feel I can safely say is that they keep starting younger and they keep getting smarter. They do not know it all, but then who does. However they knew enough to school the old school grassroots activist a little bit. And best of all they are involved in multiple movements, going in between them effortlessly. 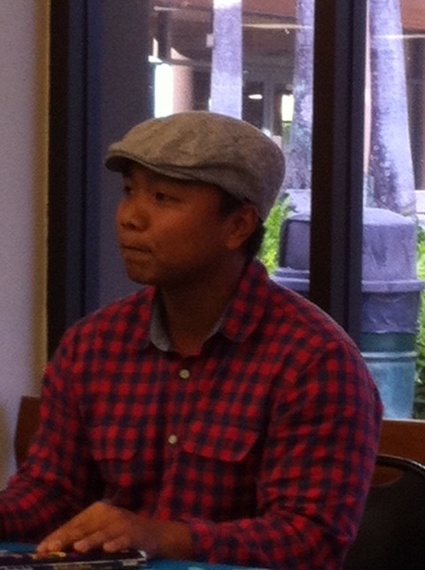 Jeffrey Tangonan Acido was raised in public housing in Kalihi. He is a son of mother who is a hotel housekeeper. He studied theology at the Pacific School of Religion in Berkeley and is currently a PhD candidate in Education at the UH, and lectures there.

He said that growing up in the poor neighborhoods on Oahu the kids would define themselves by hip hop or Hawaiian cultures instead of what he calls "their own stories" - meaning define themselves as individuals in a manner that was more true to themselves. He said that activism is spread by "talking story," but most are too busy working multiple jobs to make ends meet. Spirituality is the language for social change in these neighborhoods. So he even thinks in spiritual terms, citing his favorite activists as "three Jews - Moses, Marx, and Jesus."

At her hotel job, his mom was pushed to work so hard she would have to eat bread that she stored in her pockets, while she cleaned, and would come home hungry. The union contract called for a lunch being provided, and a break to eat it, but the reality differed. So she would come home hungry. He was bright enough to see past a manager that pushed her, to see a system of exploitation in which the manager was just a cog.

Now he's educating for social change. He teaches lots of kids, just like he used to be, in a way, and a language, they can understand. Gay rights, worker rights, political systems, etc. . 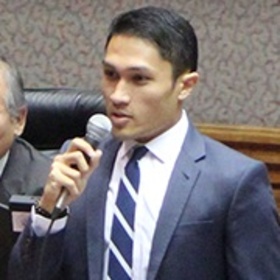 Representative Kaniela Ing from Maui was there as well. At 24, the youngest member of the Legislature is a Hawaiian, Christian, environmentalist, interested in clean government and election reform, with a master's in public administration. His most current claim to fame is being a church-going Christian who gave a pretty serious floor speech in favor of same-sex marriage.

Ing has a major work ethic he says he got from working in the pineapple fields. He knocked on 15,000 doors of voters in his district, and was way, way outspent by his pretty well qualified incumbent opponent. 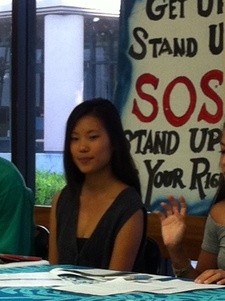 Doorae Shin is a peace-loving, vegan, environmentalist, who also protests against tuition increases at UH. Her motto is, "Anything I can do to make a difference, count me in!" Originally from Philly, she was raised by activist parents. She notes a seminal epiphany coming from watching Bill O'Reiley, resulting in the feeling of a significant amount of rage - which may or may not have caused her head to explode with prolonged exposure. Her first major foray into activism was interning at the Korean Resource Center where the first thing they wanted her to do was hold a major press conference. Despite considering calling in sick, she pulled it off and it looks like it was all downhill from there. She's worked to ban Styrofoam from the school, and ban plastic bags, cleans up beaches, holds signs at the Legislature against tuition increases, and Lord only knows how many other things while going to school full-time.

There are plenty more where these came from but these three are representative, and seeing as there are always lists of top business leaders, and lists of top doctors, accountants, and lawyers, and plenty of profiles of figures over 30, I thought it far past time when someone at least mentioned a few representative 20ish activists - much less to just give credit where credit is due. But the main reason to find these folks is because mass social change movements in this country are largely propelled by young people. The good news is they still recognize the common thread of oppression throughout various struggles, are willing to work together to deal with them, and generally speaking, stand a better chance getting them handled faster than previous generations. The only thing is the problems are a lot worse overall, but being a congenital optimist I think they will do well. Onward and upward!