I have asked myself why, with the greatest collective brain trust at a single company, Google continues to fail to develop anything new that drives revenue? And why do they have to give away products for free (Gmail), deeply discount them (Nexus 7), or fund them at a loss (YouTube) to buy goodwill.

Fail?! How could I say that? Google is by far one of the most shining success stories in the tech world. Isn't it? Alas yes, but it is only the back of a single product, and that product is not, nor will it ever be the Nexus 7. Let me explain. Google is, and always has been, a one product company. Everything, every product, idea, company purchased, free web tool, new shiny tablet or future thinking glasses is funded on the back of single huge revenue stream. AdWords. The vast majority of Google's revenue is derived from that product, and 96 percent of Google's total Revenue is from advertising. 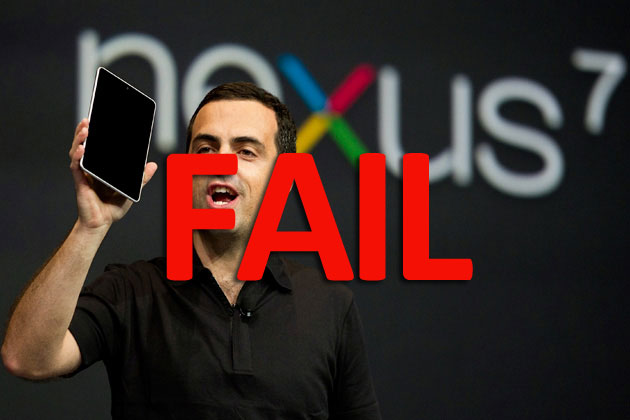 Worse yet, is that the fundamental idea behind AdWords, their main profit engine, was not even theirs, it was Goto.com's (which turned into Overture, then bought by Yahoo... oh Yahoo, where great companies go to die. Alas, that is another Silicon Valley tragedy... but I digress.) Google has essentially never developed a product, with that brain trust, that diversifies their income in any substantive way. Apple has the Macbook, the iPhone and the App store. Microsoft has Windows, and the X-Box and Office. But Google? AdWords, and... lots of products that cost money, some that make some and some that make more, but all of which would fail if they had to stand on their own. When the vast majority of your revenue is single source it just puts your whole company at risk. Think Apple circa 1997. Google is not revenue diversified. Why?

They are fundamentally a market driven company, not a creative one. Market driven companies take existing products or ideas and make them the best products, the most efficient products, but they do not really understand need-states of consumers or how to develop the kind of products that revolutionize. AdWords (copied from Goto.com) Video (purchased YouTube) Nexus 7 (copied Kindle Fire... and iPad) Mobile Advertising (purchased AdMob) Display advertising system (purchased DoubleClick) Gmail, Android, Google Docs, G+ (given away because no one would use them if they charged for them.)

They are innovators, and damn good ones, the best, but they are not inventors. Why?

Creatives invent, and they fail, repeatedly. They implode, repeatedly. And in those failures they learn. There does not seem to be much learning at Google in the products that have failed, only an engineering reasoning hat it failed because it was buggy or that this feature didn't work. Or consumers didn't adopt it for this reason or the other. The way Google hires, and the types of people they hire, don't understand failure. There is no way for them to.

This is the group of over-achievers with the scores on each test that blew the curve in every class you took. But they never really skipped class just because it was a sunny day and decided to explore; there was no time to. This is not that group. This group never fails, ever. Their brains will think them out of any corner. And yet, they cannot think up a product people will pay for. They cannot develop another ad format people will embrace. For in the end they need more people at the company chasing butterflies, not cold fusion. For those butterfly chasers inspire, they find the beauty is simplicity, not complexity.

And guess what, they often have GPAs around 2.0, and Google will not even look at you, regardless of what school you went to. They equate college success to a GPA and equate that with brilliance, and yes it is, of a kind, but innovation and invention comes from the fringe, and the fringe plays, breaks rules, skips class. When you have an entire company of rule followers there is no dissent. True dissent that gets you fired, but inspires brilliance.

And this, in the end, will be their undoing. Worse yet is that they will probably be entirely confused at to why. For they do not fail. Larry Page and Sergey Brin understand this. They invented when they developed Google's search algorithm.

But what we have in Google is a company that develops some very well-engineered products and gives them out for free but has yet to find anything that actually makes them money, or that people will buy, besides ideas they took or bought from someone else. They develop extensions to those products that feed the main profit engine. But what if the unthinkable happens, and that engine, AdWords, falters? What if, as is becoming apparent in the mobile world, Search advertising becomes less relevant?

Search is still relevant, but it just does not monetize very well through mobile, and the formats go against the long tail ease that AdWords provided for small advertisers. The more mobile the society, the more we need a better mousetrap. Unfortunately for Google that mousetrap is the iPhone and the App Store.

One could even argue that by Google "buying" goodwill, developing products and giving them away for free, they are stifling competition throughout the Internet by killing the competitive profitability of entire groups of potential startups. They are hurting others from developing that next big thing.

They are, and always have been, a one trick pony. All that has to happen is one company with a better mousetrap to come along and their entire enterprise collapses. Game over.

It may not seem it but I love Google, I admire them. I enjoy their products. I just worry for our entire industry, because if someone comes around and does develop that better mousetrap, and Google falters, it could be catastrophic for the rest of the industry. Like it or hate it, for the time being, we are all tied to Google's fate.

Hopefully they will find that next big thing before that happens. There was a reason that Google created a super secret X Lab that is seeking that next big idea. Maybe they understood that their hiring practices were dulling them instead of sharpening their senses, and that was their most brilliant move yet.

Out of that lab came Google Glass. Ignore the Nexus 7. It will be a sideshow, and it will Fail or worse, get that huge initial hit of developers who want a cheap tablet that will sit there on a shelf... much like the Kindle Fire does for most.

Let's hope that Google fails a lot. They will become a much more diversified company if they allow themselves to.

Google's next big thing is not the Nexus 7, it will be the future of Google Glass and whether they can get it to work they way they want. It's a risk, but to win in this business you must take risks. The Nexus 7 is not a risk, it is a wonderfully calculated and justified move that I am sure has loads of spreadsheets, advisors, and consultants who have projected it is their nest move forward. Uh, yeah... we know how this story ends.

The future of Google is the Google X Lab. They will fail at a lot of things, and that, is what may save Google.