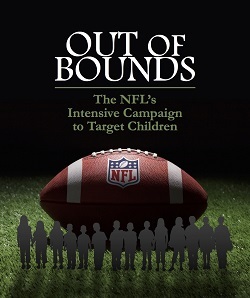 Writing this report was difficult for me. I've been a diehard professional football fan since elementary school, the age when the majority of the NFL's fans first become interested in the games. For the past 35 years, I've spent nearly every Sunday during football season watching televised games and the Giants' four Super Bowl titles are among the most thrilling moments of my life.

So I was deeply troubled to discover that the NFL's approach to children is now the same as mega-corporations like Disney and McDonald's. The NFL not only wants children to "consume" its products (licensed merchandise and televised football), it wants to immerse kids in its brand 24/7. The league wants children to play online NFL games and watch NFL cartoons when they're not watching football broadcasts. It wants to target kids in their classrooms. It wants kids to eat NFL Happy Meals. And it wants kids to spend hours each week playing fantasy football -- even though addiction experts warn fantasy sports are a gateway to gambling.

This approach has caused a sea change in how kids experience the NFL compared to when I was a kid. Back then, if we wanted a dose of football on non-NFL game days, we were responsible for generating it. We played active pick-up games instead of sedentary video games. We talked football instead of watching NFL advertoons. Our "fantasy sports" consisted of pretend play where we invented elaborate narratives featuring football, bad guys, and the occasional extra-terrestrial. And of course, the kids who weren't into football -- and there were many -- weren't force-fed the NFL by our teachers via branded "educational" materials.

I know from my own experience that my childhood love of football has affected my perception of the NFL as an adult. There is no doubt that my fondness for football has made it more difficult to acknowledge the severity of the NFL's concussion crisis than it has been for me to recognize worker safety issues in other industries. Or that growing up loving the NFL inured me to the racist slur "Redskin" when it's used in a football context.

And even though I work for Campaign for a Commercial-Free Childhood, my lifetime loyalty to the NFL made it harder to recognize that the league's recent targeting of children is harmful. Whether you're football fan or not, I hope you'll agree with me that the NFL's marketing to kids is Out of Bounds.