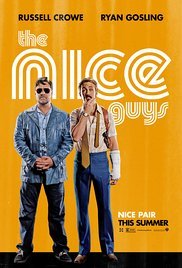 Paul Thomas Anderson's Boogie Nights dealt with the porn industry in the l970's. It's an example of one of a number of films which have attempted to exploit the heyday of a certain level of decadence with a mixture of nostalgia and parody. The Russell Crowe and Ryan Gosling vehicle, The Nice Guys returns to a similar milieu additionally throwing in a conspiracy theory concocted by the big three Detroit carmakers together with a Justice Department official to rule against a mandatory pollution control device which will cut down on automobile profits. The plot piles one thing on top of the next. There's a big time porn producer whose latest release is Pornoccio and an interchange when an actress at an industry event says "I told him if you want me to do that don't eat asparagus." Get it. The self-same producer is the eminence grise behind a work of experimental film which contains nudity and pornography in order to mask the message carried by the daughter of the Justice Department bigwig, Amelia (Margaret Qualley), who is out to blow the whistle on the corruption of capitalist society. It's obvious that Shane Black, who directed, had trouble in juggling all these pregnant pieces of plot. But sometimes a film can be so bad that it's actually good. The Nice Guys is like one of those Warhol films of the 60's (which may yet turn out to be a source of inspiration in the way the porn world of the 70's is here). It's a classic comic cop caper film of the Rush Hour variety, only the script is so convoluted and devoid of an any dramatic or comic drive that the actors deliver their lines in a dead pan that turns the idea of narrative cinema on its head. If the director of Chelsea Girls were alive, he would probably have had encouraging things to say about the script.