Twenty-four years ago, a concert predicted Dylan's future as a Nobel Laureate.

Bob Dylan is officially the songwriter with the most bling. He's got plaques, statues, gramophones, and now a Nobel Prize in Literature. True to form, the Minnesota-born singer performed a career-spanning set at the Desert Trip music festival in California Friday night but never mentioned the amazing honor bestowed upon him Thursday morning. What a rock and roll thing to do: ignore the elephant in the room simply by being the bigger elephant. He's more decorated than Paul McCartney, Mick Jagger, Pete Townshend, and Neil Young. With his new prize, Dylan has won the crown for all time. For America.

But if Dylan is a living, breathing national hero, why have we been eulogizing him since he was a young man, almost as if he was dead ?

I first asked this question when I attended a 30th anniversary Dylan tribute concert at Madison Square Garden. It was October 16, 1992, and the marquee read, "Columbia Records Celebrates the Music of Bob Dylan featuring Eric Clapton, Bob Dylan and George Harrison." Sexy Clapton got top billing because he had a current single on the charts ("Tears in Heaven"). In third place came sweet George the Beatle, because ... well, he was one of the Traveling Wilburys, John was dead, and Paul's brilliance had yet to be re-evaluated by the media. The poet in the middle of the lineup was the man himself, the Bob who could care less where they put his name.

The event would turn out to be one the greatest musical experiences of my life. Yet, what puzzled me is that Dylan was only 51 years old when the concert happened. The stage was full of many performers who also deserved their own tributes, including Harrison, Johnny Cash and June Carter Cash, Lou Reed and others. Most of the artists in the Garden for the gig were considered dinosaurs of rock even though many were only in their 30s and 40s. Tickets to the Dylan celebration were sold to the public and a live album charted after the event, but the buzz from both fizzled fast.

So, why did we honor Dylan in 1992, thirty years after his first song was released?

In the age of Nirvana and hip hop, a tribute to the man who wrote about wind, war, and watchtowers felt as countercultural as Dylan's music did when it disrupted the bobby-socks crooning of the early 1960s. He represented Americana, eschewed fame, maintained mystery, and generally didn't (and still doesn't) give a damn. That warm October night at the tribute concert, with thousands of fans and dozens of artists trying to find their way in the industry and the world, Bob Dylan was the equivalent of a musical guide rope. He was still a rebel, but a familiar one. Maybe we honored him because we finally felt comfortable in his company: by doing so, we left the boundaries of rock and roll for wider vistas.

On the radio in the autumn of 1992, a love song called "The End of the Road" topped the Billboard charts for thirteen weeks, including on the day of the Dylan tribute. At the time, I thought of the song as a metaphor for the passing of the music written by Dylan and his ilk, the generation of socially-conscious musicians who opened pathways for future performers to create their own revolutions. Now I realize the Dylan concert at Madison Square Garden didn't represent the death of an era of music but instead offered a change in our perception of genres.

Times are forever "a-changin'," as the Dylan song says, which is why it's important to pause and honor the change, honor what's leaving, what's here, and what's to come. That's what the 30th anniversary concert did--it was a pause. There, I heard my idol Steve Wonder sing his version of "Blowin' in the Wind" and watched my favorites Shawn Colvin, Mary Chapin Carpenter and Rosanne Cash perform "You Ain't Goin' Nowhere." Eddie Vedder and Mike McCready reinvented "Masters of War" for Generation X. Listen to the lyrics of Dylan's most famous songs today, and they could be about Syria, Haiti, Yemen, Nigeria or even the absurdity in Washington, DC.

Although I'd worked in a record store for years and wrote about music for magazines, I never understood Dylan until a parade of voices explained him to me in song at the Garden. The next day, I filed a report to my hometown South Carolina paper, mostly bragging about meeting Harrison, Reed and Tom Petty backstage, but I wish they'd printed what I put in my journal that night: Bob Dylan makes sense.

When I read the news about Dylan winning the Nobel Prize in Literature this week, I felt another change in the air, a positive shift for 2016. I totally disagree with the notion that Dylan's win equals a loss for "serious" literature. The Nobel organization's acknowledgement of Dylan's work means we haven't forgotten the verses that got us here, whether those words were written by William Butler Yeats, George Bernard Shaw or a folk singer with a guitar. Life today is explained in Twitter's 140 characters, Snapchat selfies, Facebook memes and pop songs written by robots and algorithms. But we shouldn't say that the old ways of communicating are dead. Lyrics are poetry, music is art, literature can be all of the above. Elements of culture may be examined and deemed worthy even if they are not created in the style of the present or the distant past. This is how younger generations rediscovered Dylan in 1992 and will do so again now.

Instead of eulogizing the poet and sounding a death knell for a musical genre he helped popularize fifty years ago, let's take a pause to celebrate what Dylan's prize might portend for the future. By doing that, we can better appreciate the value and meaning of all words. 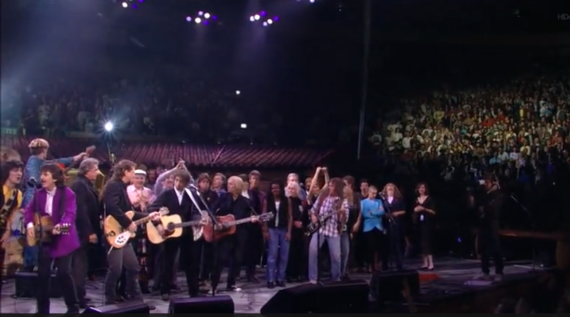 From Columbia Records Celebrates the Music of Bob Dylan
Credit: Fair Use /MDCA