At about quarter past midnight on 11/8/16, I drove into my garage with my mom sitting next to me, and began to cry. It wasn't a whaling or whimpering cry. It was a cry I have had only a few times before in my life, when pain so overwhelmed me that tears seemed insignificant. It was a cry from deep in my body, as if a monster with anger in its eyes and fanged teeth was looming down, shaking its slobbery head over me, stomping on my belly with a large combat boot. I remember saying to her, "I just can't believe it. Hate won. All the bullies that I pushed up against, over and over and over again in my life, just won. Women like me do not have a place here." In that moment, I felt homeless. I thought I might throw up.

We had gone to my Alma Mater, Wellesley College, for election night coverage, to celebrate what we thought we had in the bag. There was no other place I could imagine being that night, to celebrate with the thousands of Wellesley College women accompanied by their friends and families, watching as Hillary Clinton once and for all changed the female narrative. 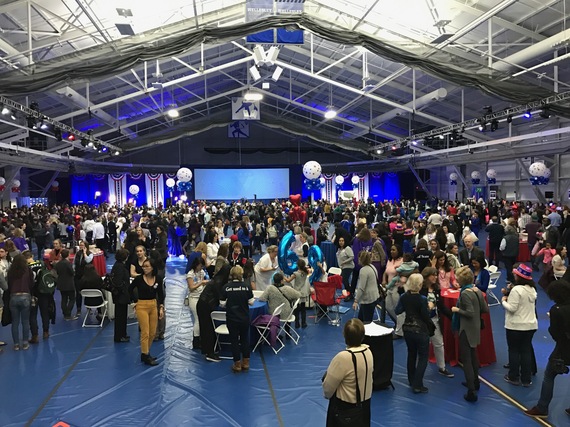 Wellesley's field house was decked out: balloons, drinks, lights, press from around the world, food, even a cupcake station with cupcakes topped with "shattered glass" pieces made from sugar. The sugar pieces were also piled around the table with little wooden hammers that said "Wellesley Women Shattering Glass Ceilings". We gathered around and pounded on the shards of sugar in good fun, laughing and smiling. 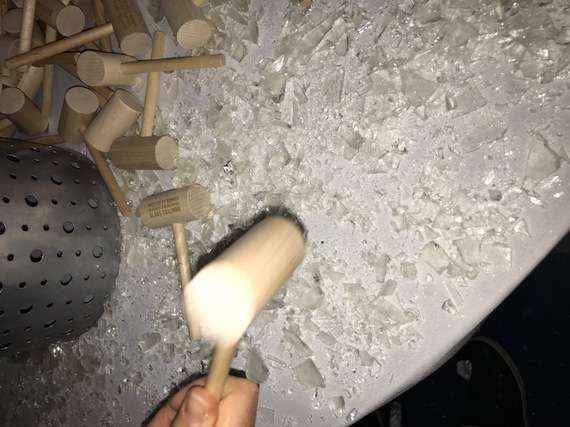 Students passed out pins and flags, "Making the Impossible Possible" "History in the Making"! 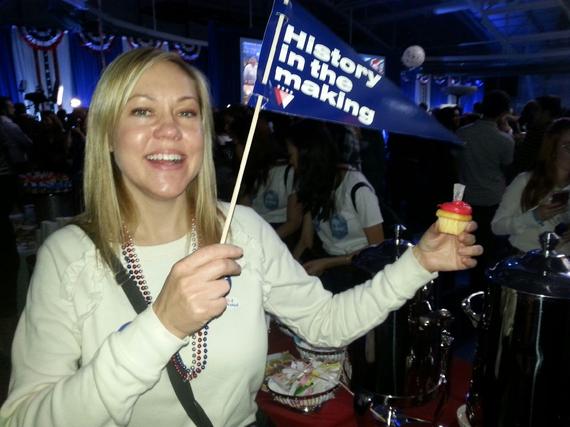 Madeline Albright (the first female Secretary of State hailing from Wellesley College) Skyped in on the big screen from The Jarvits Center, excited, anxious, and proud. 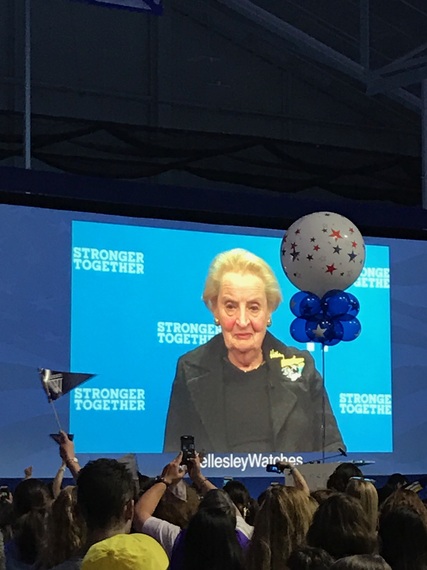 As I walked around the room, I looked at all the people who gathered, and trust me we were not a bunch of blond elitists like one of my Trump voting friends on Facebook called us. Gathered were the faces I had seen while in college, women from every race, every religion, every income bracket, and every sexual orientation. Walking around looking in the women's eyes, I could see the little girls we used to be. The girls that didn't want to sit still and look pretty, the little girls that cared more about getting into a good college than dreaming about their weddings, the girls who in their hearts knew it was up to them to pave the way for the countless other girls who hadn't yet found their voice. I also saw something I was comforted by, real actual hope-that this was going to be it. There was no doubt Hillary would be the next US president. There would be NO WAY the vilest man ever to run for office would beat the most qualified person ever to run. NO WAY, (right)?!

Then the night progressed and the hope in our eyes shifted to total despair. Indeed, we were watching history in the making, just not the one any single person in that field house thought we would be witnessing. There was no making sense of it.

Along with merit scholarships, financial aid and my mother's decision to spend her hard earned dollars on educating her four daughters in lieu of saving for her own retirement, I ended up at Dana Hall School for Girls and Wellesley College. It was through my experiences at these schools that I began to understand who I was, a woman who would not stand for intolerance, hate or injustice of any kind.
To be totally honest, my world outside of school was narrow, meaning white (as marshmallows) hard working middle to upper class. But these schools undying commitment to helping women find their power, to not be a afraid, to lead in the face of adversity built the confidence in me to not only step out of my comfort zone but to try to change the views of those in my comfort zone. As I brought back my shifting values to my community, expressing (messily at first) my newly forming beliefs, I was often mocked, ridiculed or put down. Many times, when I would express to folks, I went to Dana Hall or Wellesley both men and women would say to me, "oh were you surrounded by lesbians" or "oh couldn't hack it with the guys, huh?" On occasions when conversation turned to politics and I would express my beliefs, the male voices would start to rise, thinking if they yelled they would get me to stop talking and then they would turn to me and say "why are you yelling?" This would totally confuse me. I would think to myself, "wait, I'm not, I am just matching your voice with mine". It's only later that I realized they weren't really listening to my words they were just mad I was daring to challenge theirs. Like Hillary said, "It's just when women talk, some people think we're shouting."

Fast forward to this election, when we Wellesley women (and a good portion of our country) all confidently thought the tower of ignorance would be dealt its final blow. You have to admit, the markers were there. We had voted in a black president not once, but twice. Gay marriage was declared the law of the land. More women have been graduating from college than men, for many years now. On top of that Trump wasn't hiding his bigotry and misogyny he was parading it around for the entire world to see. This was our chance. The odds were stacked in our favor to elect the first female president, an extremely qualified candidate, to the top of the tower--so she could once and for all level it.

The moment Trump won the nomination for president hate literally snapped the rudder right off America. And therein lies the immense pain and tragedy of the election. This time period in America's history will not be easy, if we want real change. But when has it ever been easy? There are calls to "get over it" and "to move on". For what aim I wonder? Uniting under false pretense is pointless. What exactly are we trying to insure? That the Republic survives? Which Republic-the Republic of divisiveness and hate or the Republic of decency and shared common human values? It is very obvious now that both sides have been pledging allegiance to the same, but very different, half of the flag. Our job is not to try to convince those who hate to try to hate less that is on them. Our job is indeed much harder. It is to strengthen our own commitment to the truth that we are in it together, until the end, until we get it right for everyone.

Figuring exactly where were we go from here will take conviction and real work from all of us. Our soldiers are wounded and the road ahead is littered with debris, but we are regrouping. Hillary Clinton did not have a map of how to do what she set out to do. But she did not get stopped in her unknowing. Indeed she grew stronger as she vigilantly pursued, despite incredible opposition and adversity, to stand up and take action for what she believed.

As the days march on from election night, I more fully understand the power and meaning of Hillary being on the ballot that night and am more committed by the loss to work toward taking action against the illusions that bind and blind us. I take comfort in the peaceful resistance. I take comfort in the popular vote. I think about all the times Hillary (and women all around the world) was knocked down but stood right back up. With this, I have the audacity to hope again that love and truth will win just like the lotus flower that emerges from the thickest darkest swamp. We must not grow weary; for it's through the pushing toward the surface of the water, toward the light that gives the lotus the strength to one day fully blossom.

This one is for you Bannon! 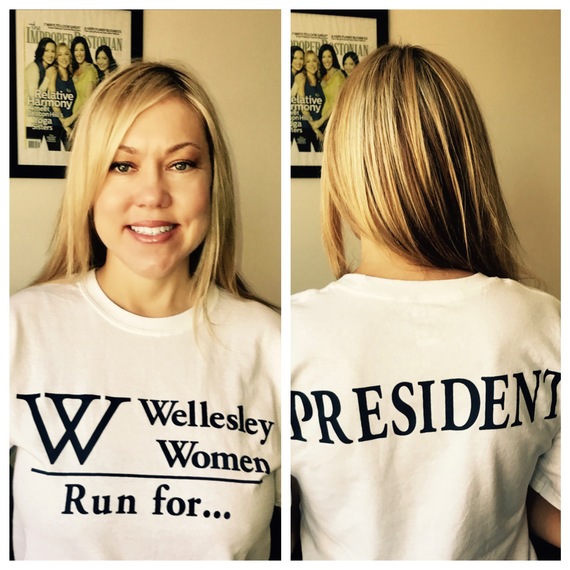