We'd had a really loving date. A lot of hand-holding, neck-nuzzling, lingering kisses. I was saying goodnight when I noticed a cloud cross his face. "Um, I don't know why," he said, "but I feel guilty."

I'd been dating Mr. Cruelly Handsome for six months. Six months of some rather fiery passion, but also six months of knowing there were other women stalking the periphery and occasionally breaching my perimeter.

"Well," he said, "because tomorrow I have plans with Margot."

Margot. A tall, slender, yet buxom drink of Brunette and my worst nightmare.

Sigh. I wasn't a lesbian, yet I wasn't sure even I could keep my hands off of Margot if we were alone too long.

Everything inside of me wanted to do what I always did when I was in painful relationships with non-commital men who wanted to be "friends" with other women/knockouts, which was to knock him out. To get angry and make threats. To cling and beg. To throw myself down El Rio de Desesperación! 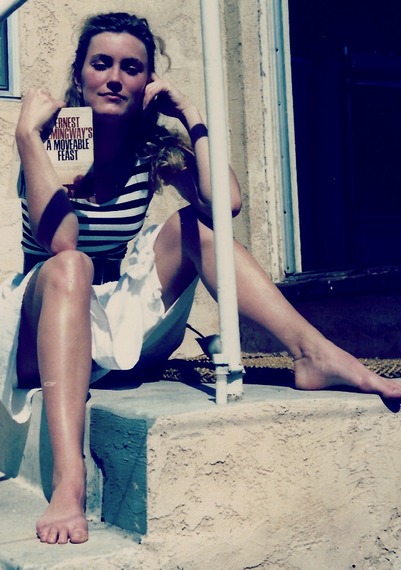 (The author at 23. Idealistic, naive, still unaware the only person she could change was herself.)

But I'd been working a 12-step program for several months by then and I remembered an interesting phrase I'd learned there, which was Contrary Action.

The idea behind Contrary Action is to think about how we would normally react in difficult situations and to do, well, the contrary.

There's a saying in the mental health world that goes a little like this, "Insanity is doing the same thing over and over again and expecting different results."

By then I knew that getting angry and threatening only affirmed for Mr. C that I was going to smother him and he should run into the other woman's arms. And I knew that begging and pleading only repulsed him.

But, more importantly, reacting in those ways always made me feel as if I abandoned myself and made me ashamed of myself. And in that moment, more than anything, I wanted to end the conversation feeling good about myself.

So I took Contrary Action.

"Maybe you feel guilty," I said, "because your connection with Margot isn't a friendship, it's romantic. And maybe you feel like you might cheat on me if you hang out with her. But there's nothing I can do about that. The bottom line is, you have to decide for yourself the best course of action."

And then I said goodnight. You could have knocked both of us down with a feather.

An hour later, as I was just drifting off to sleep, my phone rang. It was Mr. C. He was calling to tell me he'd cancelled his plans with Margot for the following day and all I said was, "Okay."

What can I say? I was in the zone. I'd gone Buddha.

I'm not suggesting that my Contrary Action changed Mr. C permanently. It didn't. Cheaters are gonna cheat and eventually that's what did us in.

But for that moment I understood that I didn't have control over my man's actions, but I did have control over how I responded to them. And that it was possible to respond in a way that left me with peace and dignity.

If you find this article helpful be sure to opt-in to Shannon's RELATIONSHIP SENSEI NEWSLETTER!