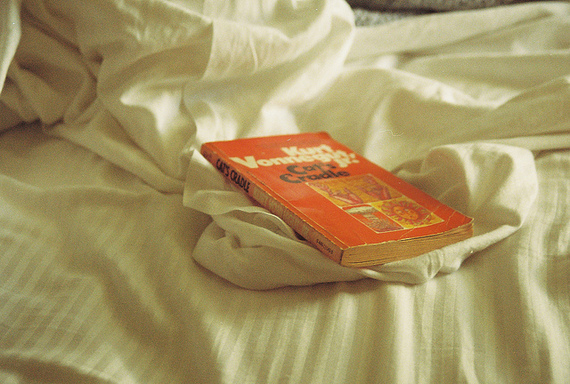 It was a nasty night in New Orleans. Torrents of rain--at once pounding and windswept. Filling and rising. We were sheltered, on the floor. The carpet was damp. My clothes were matted beneath me.

That night was unforgettable. But, the best part of the story happened ten years later in New York City, 2005.

It was the first day of the fall semester at The New School. I registered for a writing class as a continuing ed student. It had been over twenty years since I was in school, back then a psych major. I had recently started writing a novel (it chose me, I did not choose it) and it was time to decide what to do with this living, breathing thing that had taken over my life.

I took a seat somewhere in the middle of the tiny classroom and noticed, as the others trickled in, many of them looked like freshman. It would be hard to blend--best not do anything to bring attention to myself. I was clearly one of the oldest in the class. That was until Sidney Offit appeared. Our able teacher was a fixture of the New York literary scene for decades. Author of novels and memoirs, he had previously curated the George Polk journalism awards, sat on the Authors Guild board and taught at NYU and The New School for years. Mr. Offit, dressed in a tweed jacket, bowtie and wide toothy grin, peered through oversized spectacles and suggested we introduce ourselves.

A fresh faced girl from Idaho started and a few more chimed in after her. A sturdy girl sitting behind me introduced herself in a deep, molasses-smooth voice. She just arrived on campus and almost didn't come at all. It tortured her to leave her family in New Orleans, where they were now homeless and suffering through the aftermath of Hurricane Katrina, which blew out of New Orleans only days ago. The class sat in somber silence, struggling to wrap our minds around her story. The energy in the room fell off a cliff. Mr. Offit decided we should stop sharing. Instead he switched gears to writing and talked about the importance of voice.

In fact, he just had this very conversation at his favorite restaurant over dinner with his best friend, Kurt Vonnegut. Then he paused. And waited. The girl from Idaho was too slow to muffle a gasp. The rest of our mouths swung open--practically in unison.

Mr. Offit let his simple statement envelop us like the vapors of a thick fog until I broke the silence and said, "Oh, Kurt Vonnegut? I slept with him."

Idaho girl couldn't muffle the next gasp, neither could Mr. Offit himself. The New Orleans girl smacked her hand on her desk and cried, "That beats dinner, baby!"

Now all nineteen pairs of eyes were on me. Some craned their necks to get a good look. We were clearly back to sharing. So much for blending.

I told them my name and where I was from, but no one cared. They wanted the story. I told them everything.

By strange and fascinating coincidence my story brought us back to New Orleans, again with too much water. It was 1995 during a storm and a flood. At that moment I remembered another detail, "My boyfriend was there too." That got any remaining non-gawkers to shift completely in their seats. I had everyone's rapt attention, even Mr. Offit's, whose hands now rested on his hips and eyebrows crept above the rim of his glasses.

Jazz Fest weekend had come to a close and we were headed back to LaGuardia Airport. My boyfriend and I boarded the plane and waited for take-off. But the rains and winds blew wildly and without pause. We couldn't take off. Not yet. They showed a movie and served dinner as we sat on the tarmac. Three hours passed. The pilot told us to deplane--no planes would take off--the airport was officially flooded. No one could leave the airport. Cars weren't permitted in or out. We would all camp out for the night.

It was time to find a spot with the fewest transients, where we could lay out across 4 or 5 plastic interlocking seats. No such luck. The airport was packed. This meant we'd be left with option #2. The floor. And since the carpet on the airport floor was already damp, we pulled clothes from our carry-on to create a makeshift bed, a layer to shield us from the wet carpet (irrational thinking). We were cranky and hungry and tired and now wet. I was about ready to curl up in an attempt to sleep, when a man approached me and asked if anyone was sleeping beside me. It was Andy Rooney. I was surprised to see him. The last time I saw him (the only time I saw him) was on Sunday night at 7:55 pm on CBS. It amused me to think that if I were cranky, what must he be? He was cranky in the best of spirits. I looked to my right. There were about six feet of floor between me and the wall. "It's all yours," I said.

"I've got the wall," Andy called back to his companion, revealing the man who'd eventually slip in between us and lie beside me, Kurt Vonnegut. His eyes, for a split second, locked on mine; he tipped his head by way of introduction. I nodded back.

Neither one of us had planned on this sudden intimacy. He crouched reluctantly into the cramped quarters and nuzzled in for the night. We never spoke, and I tried not to breathe on him.

It was certainly unforgettable, and as you've probably suspected, there wasn't a whole lot of sleeping going on.

Eva Lesko Natiello is the author of The Memory Box, a psychological thriller about a woman who Googles herself and discovers the shocking details of a past she doesn't remember.