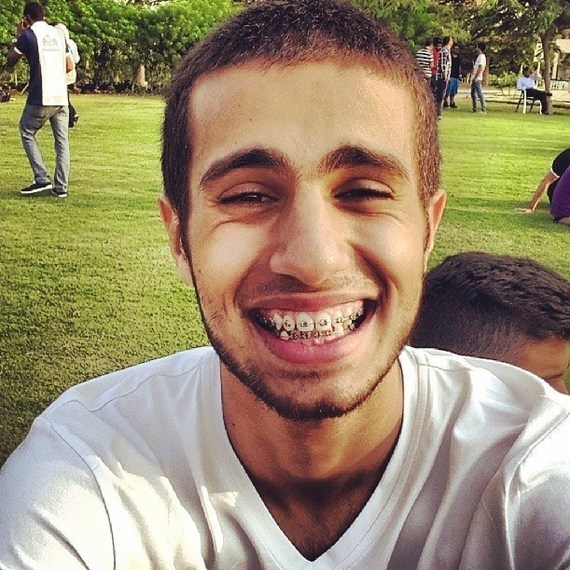 Abdelrahman ElGendy is a student, 20 years old. In October 2013, after the ouster of the elected-president Mohammed Morsi, there was a protest in Ramsis Square. Abdelrahman, being a 17-year-old then, wanted to watch and take some footage of the protest. But he was instead arrested from the car with his father, because the police suspected that the beard of his father meant that he belonged to the Muslim Brotherhood.

That was only a few days before the academic year -- and his first year of university -- started. He was expected to go to the German University in Cairo (GUC) after receiving a full scholarship to the Engineering program there. He planned on getting a scholarship to Germany in his second year of Engineering from his basketball advancement. He had it all set. But the Egyptian regime decided to twist it into a nightmare.

Abdelrahman and his father were both taken to a station and treated like thugs and were faced, along with 62 others, with 16 charges, including murder, attempt to murder and disturbing the public peace on a national holiday. They all got sentenced to 15 years. That's actually illegal because Abdelrahman was still an underage.

Here's a translated-letter of what Abdelrahman recently wrote in prison:

I've had enough. I've had enough and I wish I can just turn off my mind.
I keep thinking of all the possible ways and methods, that all lead to the same negative path.

The more I try to understand life, the more it hurts me.
I think about going out of prison, becoming free. But I find that I'm not even excited. I'm scared to death. I got used to prison to the extent that the life outside seems like a strange option now.

How can I go out and leave my father inside, when it wasn't even his fault that he's here in prison? How can I ever live with this guilt? If we both stay, how can we accept all the humiliation and oppression? How can my mother, who's going to die because of all this, bear it anymore? Or my siblings, who keep growing everyday while I'm not there as life moves on and ends?

How - if I do get out and even travel away from Egypt - can I leave my family to face the rest of the repression on their own, exactly as if I were still inside the prison? And if I stay in Egypt, how can I keep my mouth shut? How can I not talk about the conditions I've lived and the people I've seen? How can I not try to help?

And if talk, and get arrested, again, how can I live through all this nightmare, again? And if I don't talk, how can I live with myself knowing that I became a coward, too scared to speak up the truth, although I of all people know exactly what happens in prison because I've lived it all? How can I become no more than an animal who sees everything and chooses to stay silent?

How can I live knowing that I won't ever have any peace of mind again? Every bit of this real-life nightmare left a trace in my mind, in my soul, and in my heart. A permanent trace.

I realized that I keep believing in God and having faith in Him as much as possible, for one sole reason: That He would explain this to me when life ends; explain why and how all this happened to me, while having a reason behind it.

I want to understand everything in one day.
I believe that would be heaven.

So what do you want from your children, Egypt? What's your message? What has Abdelrahman done wrong to go through this in a life that he's barely gotten a chance to live? What has his father, who's a businessman and has nothing at all to do with politics, done to face these charges?

Abdelrahman was expelled from the German University in Cairo because of his absence. His basketball championship stopped. He and the people in the same case as him are in a place that treats them like criminals.

Abdelrahman and his father and the other youth deserve freedom, not life sentence in prison. This has to end. There has to be a way out.

Download
Calling all HuffPost superfans!
Sign up for membership to become a founding member and help shape HuffPost's next chapter
Join HuffPost
Follow Menna Elnaka on Twitter: www.twitter.com/MennaElnaka
Voting Made Easy
Register to vote and apply for an absentee ballot today
Register now