Nope. It's our own complacency.

We haven't won yet, not even on marriage, let alone on equal employment, housing and access to public accommodations. Yet most of our leaders and well-meaning allies have proclaimed our "inevitable" victory, turning a blind eye to other LGBTQ issues that would cost real money, like massively funding housing and jobs for queer youth escaping abusive homes.

Even on marriage the unbridled optimism is unwarranted. Reading the Supreme Court's recent oral arguments on marriage rights for same-sex couples suggests, at best, a narrow 5-4 decision in our favor.

Justice Anthony Kennedy is widely seen as the swing vote, and he had tough questions not only for the lawyers defending anti-LGBT bigotry but for our side as well. And on at least one pivotal issue -- whether LGBT rights are too novel and hence better subject to delay -- our side totally blew it in their response to the justices. 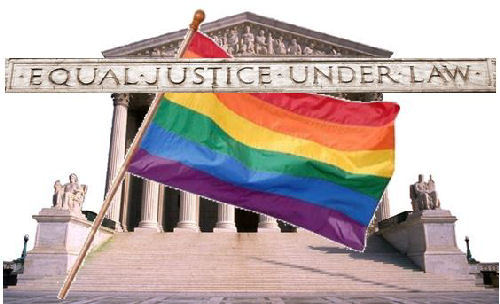 Listening to the April 28 oral arguments while at work that day, I had a "screaming at the computer moment" and wrote later that evening:

The anthropological ignorance of the justices talking about marriage today was nothing short of astounding.

As Justice Kennedy said, asking of pro-LGBT attorney Mary Banuto, "How do you account for the fact that, as far as I am aware, until the end of the 20th Century, there never was a nation or a culture that recognized marriage between two people of the same sex?"

So here we have a group of mostly white men, certainly none of them Native American, revealing their abject ignorance about "two spirit" people (otherwise known by the French as "the Berdache") who inhabited this continent far longer than the couple hundred years of their United States. Same-sex relationships on this continent were not only tolerated, but celebrated for centuries before the slave-holding, misogynist Europeans "civilized it."

Unfortunately the attorneys on our side totally blew it by failing to point this out. For the vast majority of human existence, as evidenced by anthropological studies of "primitive" peoples around the globe, women and men treated each other, and their same- and differently-sexed relationships, in ways that put our present "civilizations" to shame.

So will a same-sex-marriage victory hinge on the ignorance of our nation's finest legal minds regarding the many thousands of years of acceptance of same-sex relationships here in North America, and by hunter-gatherer societies around word? These histories, by the way, are many times longer than the histories of Judaism and Christianity, with their centuries of enslavement of wives as literally the property of their husbands.

This is not just an academic argument about anthropology. The justices' fear about embracing rights for what they see as perhaps an ephemeral group -- openly proud gay people -- echoes a central theme of the Supreme Court in recent decades. Many on both sides of this debate fear Supreme Court rulings in favor of expanded social rights before much of the country is "ready" for them, or rulings for rights that may enjoy broad support today but not in a few decades' time.

Many likely pro-gay votes on the Supreme Court are petrified at the prospect of repeating what they see as the "mistake" of the Roe v. Wade decision. In the case of Roe, that meant voting 7-2 in favor of privacy rights and the right to abortion only to see a right-wing, anti-abortion backlash take hold in subsequent years. Speaking of Ruth Bader Ginsburg, a leader of the liberal bloc on the Supreme Court, a 2013 New Yorker magazine profile remarked that for this reason Ginsburg had lectured that "she had substantial misgivings about how the Court decided Roe v. Wade."

"She's very cautious, conservative in a Burkean sense, not at all in the mold of William Brennan or Thurgood Marshall," said Jamal Greene, a professor at Columbia Law School. "She fundamentally does not believe that large-scale social change should come from the courts."

"She thinks the Court should not go too far in any given case," said another associate.

So if this is all the pro-equality "fire in the belly" that can be mustered by Ginsburg, described by The New Yorker as "the senior member of the Court's liberal quartet," where does that leave this spring's court ruling on LGBT rights?

We could get a decision narrowly tailored around marriage rights but leaving unanswered such fundamental questions as our 14th Amendment right to equal housing, jobs and access to public accommodations. And even if we do get such a narrow victory, what's to say it couldn't be robbed of much of its power by other recent court decisions?

After all, this is the same reactionary body that ruled in Citizens United that corporations are "people" and therefore could spend unlimited sums on political expenditures. Then to cap that idiocy, in Hobby Lobby it apparently decided that corporations could use their "religious beliefs" to deny their women employees access to contraceptives and abortion services under company health insurance plans.

So what's to say that this court might with one hand give us nice pieces of paper, marriage licenses, and with the other decide that businesses have a "religious" right to refuse us service? That's certainly the conclusion that bigots lept to following the Hobby Lobby decision. And while popular revulsion pushed back this reactionary law in Indiana, in the Deep South it's a different matter. A limited decision by the court could force LGBTs born in Mississippi, Texas and Alabama to wait another generation before getting broader rights beyond just marriage.

The problem with saying that "gay marriage is inevitable" goes beyond being factually wrong. It's a prescription for failure in winning this or any other right.

It means that we don't have to do anything to win. It means that we should just let the Supreme Court "do its thing" and magically grant us our rights just because we're so fabulous.

You would think that LGBTs, especially those of us living in Illinois, would have learned differently from our own recent history. In the spring of 2013, the anti-LGBT bigots defeated us in our effort to pass equal marriage rights in this state, despite polls showing Illinoisans favoring our rights by a nearly 2-to-1 margin.

While we had won the popularity contest, the other side out-hussled us that spring, and Mike Madigan's House supermajority wasn't willing to step up for a community that wouldn't step up for itself, so Rep. Greg Harris didn't call the bill.

Fortunately, late that fall, after an unprecedented LGBT mobilization at the big Springfield march, and many smaller actions besides, we finally brought home the bacon. But it took a fight with the supermajority Democratic Party to win the day. House Speaker Madigan's party had long said that they were on our side, but they weren't willing to pay the necessary political capital to win the fight until we forced them to.

Now the venue for the battle for equal marriage rights (and a lot more) has shifted to the U.S. Supreme Court. And here we must confront one of the biggest myths of U.S. politics: that justices ignore popular opinion and attempt to soberly decide cases simply based on the statements and intent of the long-dead Founders and subsequent legislators.

But the real story is that the 7-2 Roe v. Wade decision in 1973 -- now derided by justices of the right and left as too far-reaching -- was the product of a burgeoning women's movement and radically changing attitudes about women's rights to control their own bodies and destinies. The movement itself came on the heels of the civil rights and anti-Vietnam War movements, which introduced what were then radical notions of Black personhood and national self-determination for countries long dominated by the U.S. and other Western powers, respectively.

Sadly, today we live a very different country. About the only bright spot is the dramatic advance of LGBT rights in recent years. Besides that, we live in a country that is now endlessly at war, regularly dropping bombs on a host of Middle Eastern and African countries, "failed nations" and brutal U.S.-backed dictators from one end to the other, not to mention the "boots on the ground" in the U.S.'s longest-ever wars in Afghanistan and Iraq.

We live in a country that has retreated back into a level of school segregation statistically similar to that which preceded the landmark 1954 Brown v. Board of Education of Topeka, Kansas decision. A country that has reached record levels economic inequality, and one where police violence and mass incarceration against Black people are at such levels that activists have to assert the simple notion that "Black lives matter." In such a country, support for women's right to choose, while still a majority, is far weaker and less vocal than in 1973 and therefore is under threat.

The decline of the 1960s movements for Blacks and women and against war should hold a warning for LGBTs. The upward trajectory of social justice movements does not last forever, and once that ascent is over, rights can come under savage attacks, and hurtful retreats begin.

That is why our complacency is the biggest enemy of the LGBT movement.

Rather than sit back in self-satisfaction, hoping for whatever incremental gains might be given to us, we should be furiously organizing to take advantage of recent LGBT rights momentum to win as many broad-reaching gains as we can, while we can.

The current pro-LGBT momentum will not last forever. And at that point we'll be fighting to simply hang on to whatever we still have.

Andy Thayer is a co-founder of the Gay Liberation Network. GLN, along with other groups locally and around the country, are organizing "Day of Decision" rallies and speak-outs in response to the Supreme Court's forthcoming decision on marriage rights. Chicago's event will be in front of the Center on Halsted, 3656 N. Halsted Street, at 7 p.m. on whatever night the Supreme Court announces its decision. He can be reached at LGBTliberation@aol.com.