The Every Student Succeeds Act may bring a breath of fresh air to teachers that need it most.

High off the rush from defending the galaxy, Dan Adiletta finishes playing the video game Halo on the snowy afternoon of Martin Luther King Day. Though it is a holiday from school, Adiletta has work to do to prep his team for the upcoming robotics competition, "FIRST Stronghold," where students compete with castle-bombarding robots. He is not a student though; Dan Adiletta teaches computer science at Gilmour Academy in Ohio. There is a childlike excitement in his voice as he describes the work his students are doing with computers and technology in his classroom, and imagines all of the places their knowledge could take them.

Also the technology coordinator, Adiletta incorporates tech into all aspects of his teaching techniques. His students use Google Drive for file management, and the messaging platform Slack to communicate about projects twenty four hours a day. The technology obsession that drives Adiletta started early in his career as a teacher in Oakland, California.

The school in Oakland enrolled many at-risk students that proved challenging for Adiletta to engage in the classroom. Determined to spark an interest in his teaching material, he brought in electronic clickers for students to respond to questions displayed on a projector. The impact was powerful, with students able to see the evidence of their efforts and become more aware of their learning. "These students had such little confidence with themselves and had so few positive experiences inside the classroom." describes Adiletta. "Because I was showing them the hard data, [students] were able to concretely say that they made an improvement."

Technology made the difference to engage students with Adiletta's unique teaching style, and the available flexibility of teaching methods allowed for a learning mechanism that personalized the experience to his class. Though this method worked well for Adiletta and his class, the flexibility for teachers to personalize instruction in American schools is declining, especially where it is needed most.

Who controls the classroom?

Student engagement is a common problem among secondary school classrooms and teachers are always looking for new strategies to encourage a desire to learn. Their ability to do so however, may be decreasing where it is needed most. A 2015 study by the US Department of Education found that perceived teacher autonomy (how much control they have over their classroom) has been decreasing since 2003. Autonomy refers to the balance between a teacher's instructional independence and the structure set out by their school system. Administrative oversight and standardized testing are common examples of school structure requirements that teachers are bound by.

"Every class that a teacher loses out on because of a test is a shame." -- Dan Adiletta

The data from the US Department of Education shows that perceived control has been decreasing annually for nearly every teacher and school characteristic. 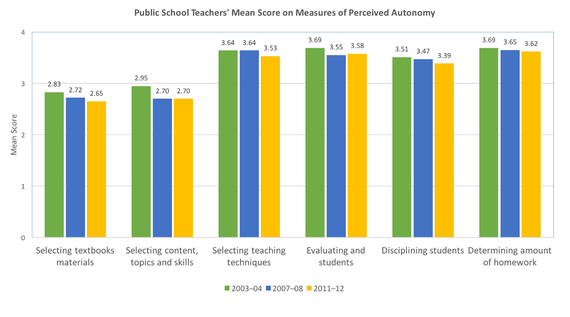 Most worrisome, teachers in schools with the highest levels of student poverty report the lowest perceived classroom control. Standardized test results regularly report low-income schools performing lower than their higher-income counterparts. The schools in most need of improved test scores have less control over their teaching as educators and are forced to spend more time preparing students for standardized tests. Teachers become forced to "teach to the test" rather than focusing on areas that could truly benefit their students' learning. Adiletta knows the frustration that teachers have been facing. He echoes many when he says that "Every class that a teacher loses out on because of a test is a shame. High risk schools could use the flexibility to relieve difficult situations." 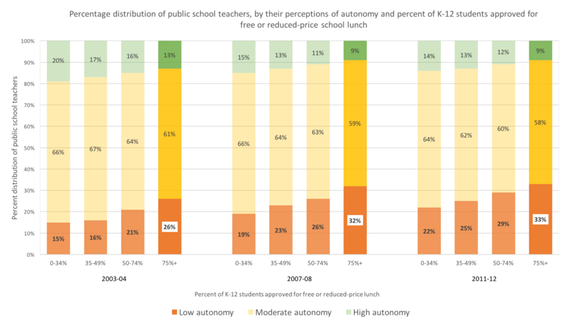 The problem of declining perceived autonomy is complex with many factors that contribute to a teacher's perceived control over their classroom. Teachers must be able to use professional judgement to tailor their instruction to students, as acknowledged by the US Department of Education. Will decreasing the requirement for standardized tests in low-income schools as suggested in recent research allow teachers to better personalize instruction?

A ray of sunshine on a cloudy day 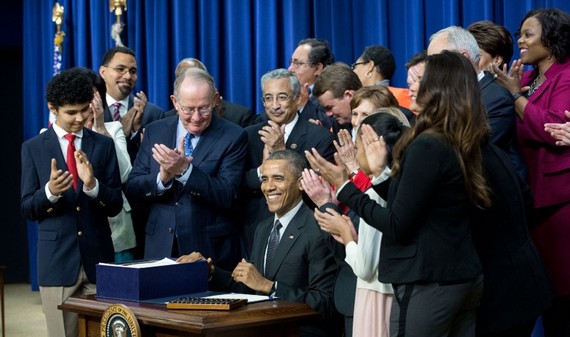 Standardized tests created by the No Student Left Behind Act of 2001 have been criticized for disadvantaging students in poor schools, where the resulting negative impact has been the greatest. The recent Every Student Succeeds Act (ESSA) aims to reduce mandatory testing by returning control from the Federal to State Governments.

ESSA may reduce the amount of standardized tests in low-reporting schools, allowing teachers to spend less time preparing their students for tests with greater flexibility to provide more personalized attention. This change could come to districts in states that decide to lessen the weight of standardized tests as a school reporting mechanism. Though the changes have yet to be propagated, the future already shines brighter for many. Just like Dan Adiletta's practice, such change could spark more personalization and technology in the teaching process for other educators.

Adiletta hopes that the new measures will remove a weight from teachers' shoulders who need more flexibility in their classroom. "It's a breath of fresh air." He says with regards to teachers overburdened by standardized tests. After a decade long of teaching to the test, perhaps teachers will finally have the autonomy they are looking for in order to differentiate instruction. And perhaps we will finally have the focus needed to truly benefit student learning.