It's February 1 and unless you've submitted your choice for who should win the Nobel Peace Prize this year, you're out of luck. This is the day the nomination period ends. "We get thousands and thousands of letters, " says Geir Lundestad, the Director of the Norwegian Nobel institute who has presided over the awarding the prize for the past 22 years. "Presidents, prime ministers, you would be surprised the kind of people who send in nominations, " adds Lundestad, a professor of history, who is the Permanent Secretary of the five-person Norwegian Nobel Committee that votes on the prize. The prize, which went to the European Union last year, carried a cash award of 930,000 Euros or about $1.2 million. But not just anybody has the right to make a valid nomination. Those must come from members of national assemblies or governments, academics or the directors of peace and foreign policy institutes, or from a few other sources, such as former Nobel Peace Laureates themselves. Nonetheless, Lundestad says he looks at all the letters that pour into his Oslo offices, even those from just ordinary folks to see "if there are any really good ideas." By and large the letters that stream in from the public tend to nominate the same people as those with the right to make the nomination, says Lundestad, except for one big addition. "That is the many who nominate themselves -- which is not a valid nomination under any circumstances, " he says, adding that it "has become popular to send in letters of support for particular nominees. The record there is 750,000 signatures of support for one candidate who did not get the prize." 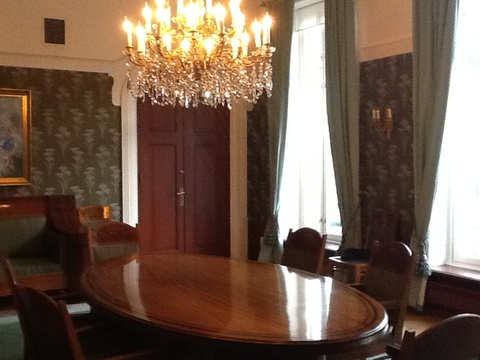 The table around which the Norwegian Nobel Committee votes on who will be awarded the Nobel Peace Prize.

Lundestad says that in recent years, 230-240 different people and organizations have been nominated for the award. By the end of February the Nobel Committee, which is selected by the Norwegian Parliament, meets to deliberate the nominations. It whittles down the candidates to a short list of 30-35 names. Norwegian experts then conduct research and write reports on those candidates. By April the list is reduced further, to 10 names or fewer. "Then we bring in international experts to help us write reports on these remaining candidates," says Lundestad. After five or six more meetings a consensus is reached on the winner, though barring consensus a simple majority vote determines who gets the award. The announcement is made in October and the prize is always awarded on December 10th, the date of Alfred Nobel's death in 1896.

I had the opportunity to interview and meet Director Lundestad when I traveled to Oslo along with Father William Bichsel, a Jesuit priest who was invited to attend the Nobel Peace Prize ceremony two months ago. Mr. Lundestad also met privately with Fr. Bichsel, a lifelong peace activist, who is a lightning rod for controversy because of his outspoken criticism of U.S. nuclear security policy. Fr. Bichsel, known as Fr. Bix, recently spent six months in federal prison and six months of subsequent house arrest for protesting nuclear weapons. Part of the punishment was for his trespass action, along with four others, at the Kitsap-Bangor U.S. Navy Trident nuclear submarine base in 2009. The base, located 40 miles from Seattle, reportedly houses one of the largest stockpiles of nuclear weapons in the U.S. By trespassing onto the base, Fr. Bix hoped to draw attention to the hypocrisy of U.S. nuclear security policy. We espouse disarmament, says the 84-year-old priest, yet at the same time the U.S. is upgrading and modernizing its nuclear arsenal, to include a new fleet of submarines, at a cost of billions of dollars. This, while exerting pressure on other nations not to develop their own weapons, adds the priest. His nuclear abolitionist views serve as flashpoints of disagreement and controversy with those who believe nuclear weapons continue to be an effective deterrent against enemy attack. 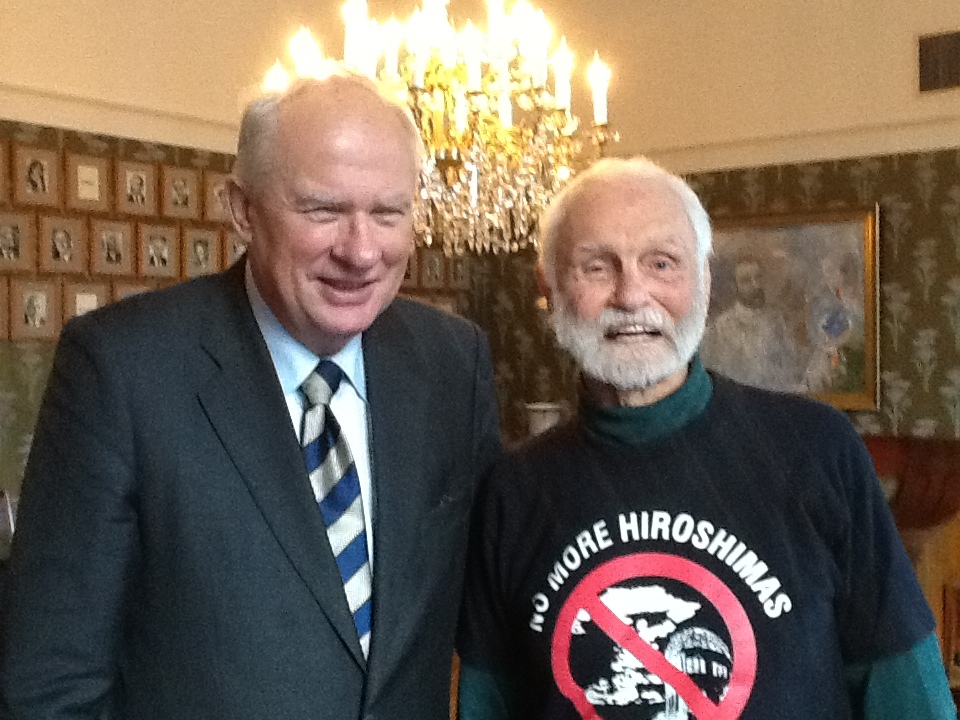 In Oslo, sitting in a room surrounded by the photos of the Nobel Peace Prize laureates, Lundestad described Fr. Bichsel as "a decent human being who should be well treated." Lundestad then picked up on the issue of the controversy which has often dogged the awarding of the prize and its recipients. He recounted that in 1935 the Nobel Peace Prize was awarded to Carl Von Ossietzky, a pacifist German journalist and outspoken critic of Adolf Hitler. "He was the symbol of resistance to Hitler, and when this was announced he was in a concentration camp," said Lundestad.

Giving the prize to Ossietzky was so controversial, continued Lundestad, that two members of the selection committee who disagreed with the choice quit, and the King of Norway didn't attend the award ceremony. "I think the decision to award to Ossietzky was maybe the best decision the committee has made in 111 years. So there is absolutely nothing wrong with controversy," said Lundestad. "If you stand on principle it will often be very controversial."

Helen Young is directing The Bangor 5, a documentary on nuclear weapons and the federal case involving Fr. Bix and four other activists who trespassed onto the Kitsap-Bangor U.S. Naval base in 2009.