The Nobel Prize is awarded in three science categories: physics, chemistry, and physiology or medicine. In 2012 each science prize was shared by a pair of researchers, for a total of six new science Nobel laureates. Among this year's six laureates in these categories is the usual number of women: zero.

The last time a Nobel Prize in science was awarded to a woman was in 2009, when a record number of three women scientists became Nobel laureates.

Who Were They, and How Did They Get There?

Elizabeth H. Blackburn and Carol W. Greider shared the Nobel Prize in Physiology or Medicine with Jack W. Szostak in 2009. They discovered how chromosomes are copied during cell division. Blackburn worked first with Szostak and then with Greider to understand the crucial role of telomeres (the coverings on the tips of chromosomes) and the enzyme telomerase in making sure that no information is lost during cell division.

When Blackburn explained her research, she also credited others. Szostak did not. In her Nobel autobiography, Blackburn describes herself as "indebted" to teachers, mentors, and predecessors like 1983 Nobel laureate Barbara McClintock. Encouragement from those in the know and a female role model in her field mattered to her. Blackburn ends with acknowledgment of her parents and her husband, saying, "[H]is encouragement in this way has helped me through years of doing science." Her husband's support mattered too.

Greider was the offspring of science researchers. Her father held a Ph.D. in physics, and her mother held a Ph.D. in botany. When this couple finished their post-doctoral work in 1962, they followed Kenneth's, not Jean's, career path. Kenneth landed a faculty position at Yale University, where Jean accepted another post-doctoral position. When Kenneth accepted a position at UC Berkeley, Jean became a community college instructor.

Also in 2009, Ada Yonath shared the Nobel Prize in Chemistry with Venkatraman Ramakrishnan and Thomas A. Steiz. These scientists mapped the ribosome, the subcellular machinery that reads messenger RNA and uses the information encoded there to produce protein.

In her Nobel autobiography, along with an explanation of her research, Yonath thanks her mother, sister, daughter, and granddaughter -- other women -- for their support.

Steitz, too, mentions his mother in his Nobel autobiography: "My mother devoted her time to all of the domestic chores required for raising a family which eventually grew to five children."

[T]he very best 25-30 students of the 300 total were in my math, science and English classes. ... I particularly remember how extraordinarily good the girls were in my math classes -- only two or three of the top ten were boys. I have never had any doubt that women are as good at or better than men in math. 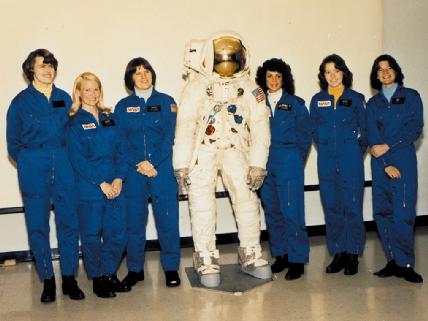 If the women dominated the mathematical accomplishment of Steiz's high school class, why did he, and not one his female classmates, earn a Nobel Prize? Even NASA recognized in 1978 that women were good scientists and could be astronauts (see photo).

Curie was awarded a second Nobel Prize in 1911, this time in chemistry, for her discovery of the radioactive elements radium and polonium. Curie's daughter Irene Joliot-Curie is one of the other three women to garner the prize in chemistry. That's four Nobel laureates in chemistry ever; that's four women out of 163.

Why did it take 60 years for a second woman to be awarded a Nobel Prize in Physics? Why have 50 years elapsed since a woman has won this prize in physics?

After a global survey, the American Institute of Physics (AIP) reported in 2012, "Across all countries, women have fewer resources and opportunities and are more affected by cultural expectations concerning child care." (See reports and statements at AIP's "Women and Physics" webpage.)

The future looks brighter. The AIP reported that in 2003 women held "22% of bachelor's degrees in physics and 18% of Ph.D.s in physics -- a record high." In other words, the low numbers of women studying physics represent an increase.

However, this same report states, "While almost half of high school physics students are girls, less that one-fourth of bachelor's degrees in physics are earned by women." Though men and women leave the field at roughly equal rates in graduate school, women drop out of physics at higher rates between taking classes in high school and finishing college.

Last year The Guardian reported bad news, too, based on a longitudinal study of Ph.D. students in chemistry in the UK. When women began their studies, 72 percent planned to become a researcher, but by the time they completed the Ph.D., only 37 percent planned a research career. Fewer men, 61 percent, started with the same plan, but very few, just 2 percent, changed their minds about a research career. Again, women flee science at higher rates than men do.

Generally, women in United States earn roughly 77 cents to the man's dollar. One might think that a field based on objectivity and consistency would rise above this particular cultural problem. But AIP concludes, "Even when working in the same sector for the same number of years, women's salaries are lower than men's in physics and related fields."

In other words, though the Nobel Prize is a small sample, bright high school girls do not end up on the cutting edge of physics at the same rate as their male counterparts. And even if they stick with it, they aren't rewarded in equal measure.

Some move to other disciplines in college. As Ph.D. students, some find academia competitive and isolating. According to The Guardian,, many women are explicitly warned of obstacles that they will face because of their gender. Some slow their science careers to raise children. Some lack encouragement from a spouse, encouragement that male counterparts either don't seem to require to the same extent or are more likely to receive. In general, women remain lower on the totem pole even if they do devote themselves to physics for a lifetime.

As a result, a woman is awarded a Nobel Prize in Physics every five or six decades. That means that it could happen again any time now. But don't hold your breath.