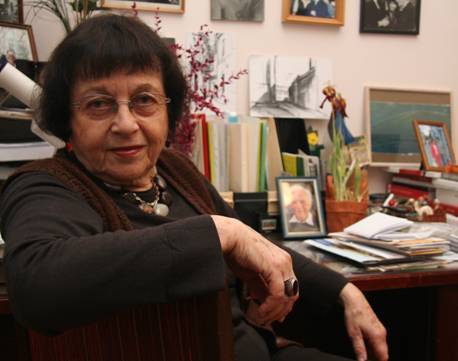 "You must meet Irena Veisaite." That's what I was told when I was first on my way to visit Lithuania.

She was a remarkable woman, I was told, a Jewish woman, and one of the most influential tolerance leaders in Lithuania.

I made sure to find her, and in her living room filled with plants and photos and plaques, Irena served me tea and told me her story.

At the age of 13, she was confined in the Kovno ghetto, without either her mother or her father. After more than two years, Lithuanian friends managed to smuggle her out. She ended up hiding in the home of a non-Jewish woman she came to consider her second mother. And this is how Irena survived. But after the war, her "second mother" was sent to Siberia by the Soviet regime.

Yet out of this terrible personal suffering, Irena emerged as a leader of efforts toward mutual understanding.

She defines tolerance as "a permissive or liberal attitude toward beliefs or practices different from or conflicting with one's own."

But she adds another concept to that definition: "the non-acceptance of intolerance."

In the days since the U.S. presidential election, Irena's words have been on my mind. In the days ahead, I'll be asking myself what role I and others can play in creating a more tolerant, a more equitable, and a more peaceful world.