My identical twin sons were born 8 minutes apart. They look alike, they've gone to the same schools all the way through college, they're both professional dancers, they're both gay. Personality-wise? They couldn't be more different. During the 2004 presidential race, some pundit referred to the vice-presidential candidates as "Mr. Sunshine and Mr. Twilight." That's the dynamic we've got with Darling Sons A and B, and the way they came out to us was completely consistent. 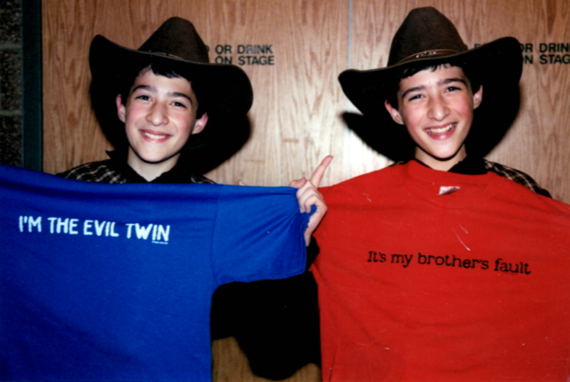 Mind you, we'd picked up clues for years that they might not be headed for a totally cis/hetero life. DS A's decided preference for the Snow White dress-up outfit springs to mind, as does the time his sister dressed him as a bride, with the announcement he was going to marry Frank. Or the fact that one of their favorite movies when they were in grade school was To Wong Foo, Thanks for Everything! Julie Newmar.

Neither of them ever said anything, though. DS A (aka Mr. Sunshine) even had a girlfriend for a while in 8th and 9th grade -- although I think the relationship was more her idea, and he, being a kind and cheerful sort, went along with it.

But then, when they were sophomores, I witnessed a brief interaction between him and another boy at a dance convention -- as he passed by, DS A reached up and touched the other boy's cheek.

Still, he didn't mention anything to me, so when the two of us were driving home from a dance rehearsal one day, I brought it up myself.

With DS B (aka Mr. Twilight), it was a whole other story. My daughter and DS A weren't even sure about DS B's sexuality, and he'd certainly never said anything to any of us. They speculated that he might be asexual.

Then, in the summer after the boys' first year at NYU, DS B was finishing up the musical theater program at Jacob's Pillow Dance in Massachusetts. The final performance was on his birthday, so Curmudgeonly Husband and I (who still live in Oregon) couldn't call and talk to him. The following day he was traveling back to New York, but on Monday, I texted him.

Me: Can we Skype tonight?
DS B: No. I've got Jacob's Pillow people coming over for dinner.
Me: What about tomorrow? Dad and I would really like to talk to you.
DS B: Is this about my Facebook status? Because I'd have thought you think enough of me that it wouldn't matter -- (There was more. I don't entirely remember it, but it was quite the text rant.)
Me: What Facebook status? We just want to talk to you because we didn't have a chance on your birthday.
DS B: Oh.

The Facebook status in question? He'd changed it to being in a relationship with his first boyfriend.

I worried about that for quite a while, though. I mean, why wouldn't he have shared this with us earlier? Surely he couldn't imagine we would disapprove. His brother was out. We had friends who were out -- going all the way back to my best friend in high school. But I have a tendency to suffer from "experience blinders" -- simply because I didn't think coming out would be a big deal, didn't mean he didn't think so.

We talked about it recently. His first response when I asked whether he was afraid that we wouldn't have accepted him was, in the tone of deep disgust that DS B has raised to an art: "Mo-ther. Of course not."

He said, "I didn't want to deal with it. I wasn't interested in a relationship at the time, and then, when I was, I figured I'd just put it on Facebook and you'd see it."

That's how the Big Gay Reveal happened in our family: in one brief, matter-of-fact conversation, and one social media side-step.

So although I'm an author who writes primarily gay romance, where angst-filled coming-out stories are a stock-in-trade, I'll probably never write one myself. Not because those stories aren't important, or meaningful, or sometimes heartbreaking for the people involved, but because I don't want to write about a world where it's a big deal. I want it to be a given -- you are who you are, you don't have to hide, and although there might still be idiots in the world who are living in the Dark Ages, you don't have to let them into your story.

I want confessing who you want to love to be as devoid of drama as it was for us -- if you don't count that 30 second text meltdown when DS B didn't understand the question.