I'm putting numbered stickers on packages of latex gloves. I run through the labels as quickly as I can to prove I'm not a drain on the system, not an impediment to the groove that was established long before I sauntered onto the stickering stage. It is the first week of my summer internship in Malvern, Pennsylvania, and rather than work solely with management back in the office, this first week is devoted to working alongside the people of Baker Industries.

A man comes to join the five-person table at which I'm stationed and is handed a box of gloves and labels by our supervisor. "Any jokes for us today?" Expectant eyes turn toward him, seeking entertainment from a well-established jokester.

"Did you hear about the guy who lost his entire left side?" A brief pause to let the question sink in. "He's all-right now." The others begin to laugh before I do; it takes me just a moment longer to get it.

He continues with his joke-telling, and the others continue to critique the jokes he chooses; that one is hilarious, that one could be better, that one is funnier because it's longer, that one doesn't make any sense. Their critiques are quick, honest. The jokester himself is slowed in his work as he turns to face everyone as they speak to him; I am told later that he is clinically deaf, and has recently learned lip-reading.

These are the workers here at Baker, and in a lot of ways, they are the ones society would tend to ignore. They're the ones with physical disabilities, or with mental handicaps; the ones with criminal records, or with past drug addictions; the ones for whom finding a steady job is a massive challenge, and the ones whose fight against poverty is not always successful.

These are the ones that society seems to have forgotten.

"I've got to get into my own house," I overhear a young woman talking to a friend. "I don't need to be dragged down by the stuff my cousin is doing, I just need to get out."

The friend nods her assent even as her eyes remain glued to her handiwork.

"Everyone wants to see me doing good, you know? Like, they're proud of me. And I don't need this right now, not now I've gotten myself straight."

"You need to leave, that house is toxic."

"I know, I'm waiting on a call today." She explains the program she's found, one that will pay her first six months of rent if she finds a landlord in a neighborhood that is willing to rent a home to an ex-offender. She has finally found a landlady who is prepared to let her stay in her apartment, but I know from the exhausted tone of the conversation that it's been a long process. Ex-offenders aren't usually considered the most reliable of tenants.

I am moved from my space on the stickering line to work elsewhere, putting labels on canisters of silly putty. The grizzled man across from me is silent, and doesn't speak for a long while. He is a veteran, I learn; unable to transition into domestic life once he returned from war, he became homeless and, after some time, sought help at Baker. When one of his supervisors comes to work alongside him, he begins to grumble about her being there, and she matches his tone -- but both of them are smiling to themselves, secretly so the other doesn't see, and it's clear that the banter is a highlight of their day.

It's not for me to interrupt them.

The small woman sitting across from me labels the curved tins much more quickly and adeptly than I; she speaks to herself as she works, mumbling quietly as she sits bent over her pile of canisters, her words a garbled stream of an unknown language. "Her family basically abandoned her," my boss says when I ask about her later, "But she's just great. Baker is her family now." I see her again at the after-hours game night, and she begins to play apples-to-apples with fervor. A volunteer reaches for the cards to read them aloud for her, but she waves the volunteer away and begins to read them herself, her speech no longer garbled, and adamantly judges each card with a lighthearted humor.

I am called away and asked to participate in an occupational therapy group session. There are two therapy students here from the master's candidate program at Thomas Jefferson University, and they host these sessions four times a week; each one is geared toward preparing Baker's workers in some way for a life in the real world, outside of this organization. 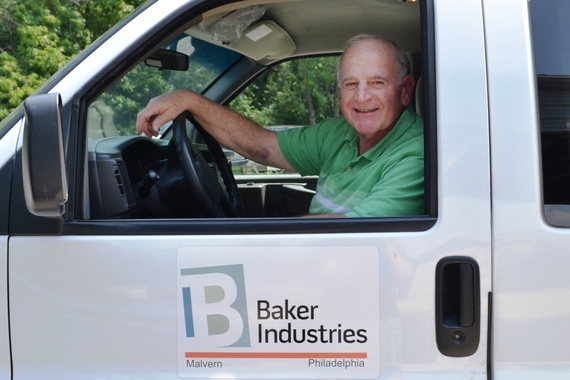 The focus is on interviewing skills this week: I'm handed a list of questions, paired with two workers, led to an administrative space, and told to interview them as though I were an employer myself. I feel awkwardly under-prepared to interview anyone -- I barely know how to successfully impress in an interview myself. I scan over the questions and read them out with some semblance of authority I do not have.

An hour later, I leave the meeting impressed by and fostering a newfound friendship with both of the Bakerites from the session. One of them approaches me the next day, a big grin splitting his face in two.

"I got to drive the forklift today." I don't understand the significance of what he's saying at first. "Think that'll be a good thing to mention in an interview? That's like, a good skill, right?" I understand his excitement now, and I can't help but smile and congratulate him. It's a good skill to have, yes -- and even more than that, it's a symbol of his supervisors' trust in him.

I hear some days later that he won't be allowed to drive the forklift anymore. He's failed his drug tests. He has a choice now: he must either go to a rehabilitation clinic and show Baker proof of his attendance, or he must leave the Baker program. I am not expecting to be so disappointed by the names on the list of those who have tested positive for drugs, but I am. I have known them for one week, and I am already invested in these men and women; it feels like betrayal. These people have their flaws, I am reminded: if they did not, they would not be here at Baker.

But these flaws are by no means insurmountable. Baker is a place for recognizing the potential in those who may not even see that potential in themselves; it is a place that offers the dignity of a job to those who others would consider unhirable; it is a place stocked with an eclectic group of adults who have all faced, or are currently facing, their own particular set of struggles. To give up on them simply because they are still battling their demons would be to go against the very mission of the industry.

I meet these Bakerites and I see what they have to offer long before I know the specifics of the obstacles they are overcoming. The man who so often tells jokes is gently comical, sweetly curious, and hearing-impaired. The woman who seeks a home away from her cousin's negative influences is hardworking, determined, and an ex-offender. The grizzled man who speaks only to his supervisor is gruffly amusing, softly sarcastic, and a once-homeless veteran. The woman who labels tin cans so quickly and enjoys apples-to-apples is genuinely intelligent, outstandingly humorous, and struggling with a mental disability. The man who once drove the forklift is talkative, headstrong, and struggling with drug addiction.

These people are all so much more than their flaws. And that's why we're all here.

That's the truth that keeps Baker Industries in business.