The cast of HBO's "The Normal Heart" joins HuffPost Live's Ricky Camilleri at 10:50 a.m. EST on Tuesday, May 13 for a frank conversation about the AIDS crisis of the 1980s and their adaptation of Larry Kramer's iconic play.

In the interview, taped Monday, cast members Julia Roberts, Mark Ruffalo, Jim Parsons, Taylor Kitsch, Matt Bomer and director Ryan Murphy shared the joyful story of being on set on the day the Supreme Court ruled the Defense of Marriage Act unconstitutional. Murphy explained that the cast got the news while shooting a scene with a huge group of extras, many of whom were gay and lesbian, and the euphoria was made even sweeter by the presence of "Normal Heart" playwright and gay activist Larry Kramer. 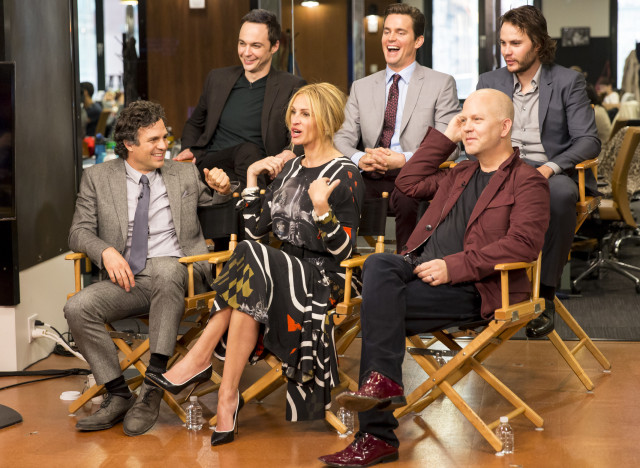 The cast agreed. Jim Parsons said the serendipity of shooting a triumphant scene from the film on the same day Kramer could lead the charge in celebrating in a real-life victory was surreal.

"It was moving, but I'm more gobsmacked that life worked out that way and I was fortunate enough to be standing there that day," Parsons said.

Julia Roberts described the experience most succinctly: "If you saw it in a movie, you wouldn't believe it."

The wide-ranging HuffPost Live interview includes intimate details from the "Normal Heart" production, including Matt Bomer's 40-pound weight loss and why Murphy decided to air the film on HBO rather than through a theatrical release.

CLICK HERE to see the full interview with the cast and director of "The Normal Heart" on Tuesday, May 13, at 10:50 a.m. EST

1 / 113
Nick Jonas
The HuffPost Live office collectively swooned when the "Jealous" singer brought his charm to the studio on June 11, 2015.
HuffPost Live