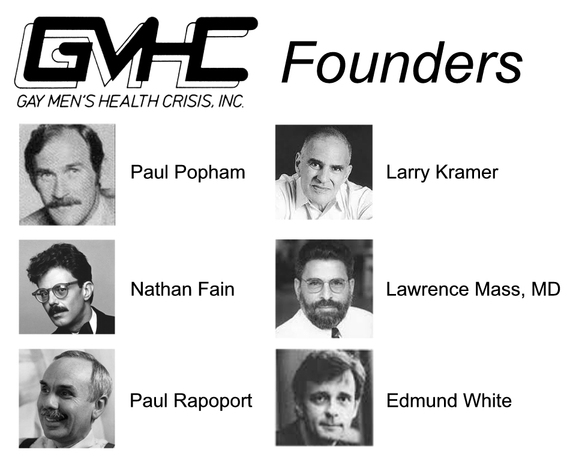 It took over 20 years for Larry Kramer to finally see his gut-punching AIDS play The Normal Heart put to film (kudos to Ryan Murphy and HBO), but only days for the movie's few critics to slam its lack of racial and gender diversity. In what is now becoming a familiar pattern, filmmakers are being told to diversify our history, even if that history was less than diverse.

Unless we're critiquing future Ken-Burns-length miniseries on LGBT history, most of these projects focus on digestible slivers of our larger story. Kramer's play, and his screenplay for the film, is largely autobiographical, telling mostly his own story during the first three years of the AIDS crisis. Almost every character in the play and film is based on a real person involved with Kramer's earliest AIDS activism, including some of the six white gay men who founded GMHC. For the first time online, here's a complete list of who each character is based on:

It's a sad fact of history that the earliest AIDS activists didn't come close to matching the diversity of those being felled by AIDS. White gay men were certainly the largest demographic early on, but by 1983 the CDC had reported 3,000 cases, with 1,283 deaths. Fifty-nine percent of the cases were white, 26 percent were black, and 14 percent were Hispanic. Women accounted for 7 percent of the cases. While some could argue that Ryan Murphy should have more effectively used the openness of film to portray these diverse demographics, Kramer's world was Kramer's world. It should be examined and critiqued for how it was, not how we wanted it to be.

HBO's most recent documentary, The Case Against 8, came in for similar criticism for its lack of racial diversity. It presents itself as nothing more than a gripping inside look at the team and plaintiffs that brought the Prop 8 case under the umbrella of the American Foundation for Equal Rights. Doesn't complaining about the film's whiteness let AFER's whiteness off the hook? Shouldn't we ask instead why some of our most powerful LGBT-rights groups aren't as diverse as our community?

The same mistargeting happened with David France's 2012 documentary How to Survive a Plague, about the highly effective AIDS-treatment advocacy started by ACT UP, and then TAG. Sarah Schulman, a co-producer of the other ACT UP documentary that came out that same year, derisively calls Plague "The Five White People Who Saved the World." While it would be easy to dismiss her promulgation of this white-male-supremacy critique of France's film as a simple case of competitiveness, we shouldn't dodge the reality that ACT UP, like GMHC before it, was far less diverse than New York City's AIDS demographics. A 1989 survey of 500 ACT UP New York members (Gilbert Elbaz, 1992) showed that 80 percent were gay white men. Hard questions should be asked and explored as to why so many of our progressive contemporary movements (ACT UP, Occupy, etc.) fail to achieve the diversity of the people they are fighting for.

Filmmakers who paint history more inclusive than it was rob their audiences of hard truths worth exploring.