Travelling to the North of this diverse country has been a new experience for me. For those of you who read the first part of my double-header, I described my short but eventful visit to the mountain town of Metsovo in the Pindus mountain range.
As well as exploring the town, I enjoyed staying at the Katogi Averoff Hotel and Winery, member of Aria Hotels. Aria Hotels is a small family-owned boutique hotels and villas company and I'm now heading towards another Aria Hotel.
My next stop was about a couple of hours away in the village of Kipi. Kipi Suites is a boutique hotel in the small village of Kipi, in the Zagori region, which lies at an altitude of 800 metres - the lowest village in Zagori. Prior to the Balkan wars, Kipi was the central point of the region, but is now a quieter, more peaceful setting and just what you need after the long drive.
The manager, Aris, a friendly and helpful guy, showed me around the hotel, which retains the architectural feel of region with its stone-built houses. It is a small collection of converted houses dating back to 1850 and lends itself to the cosiness of winter and the longer summer days equally well. I ended the long day by enjoying a dinner accompanied by a glass of wine from the vineyards of Epirus at the 'Kipi Bites' a restaurant serving fresh, local produce. Afterwards I took a short walk - nothing beats the fresh mountain air especially when you live in a city. 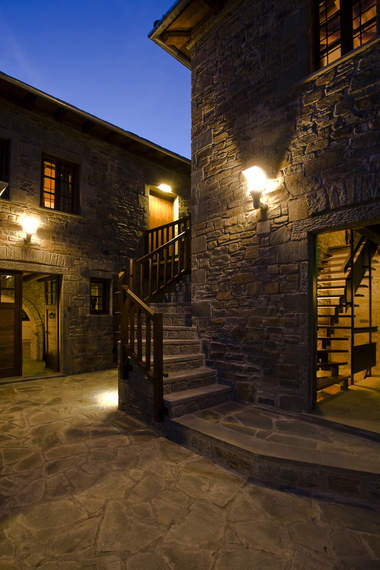 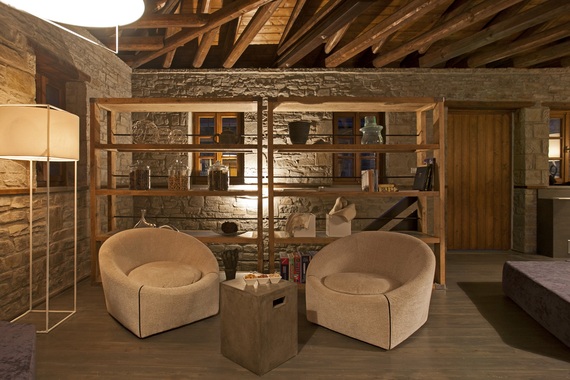 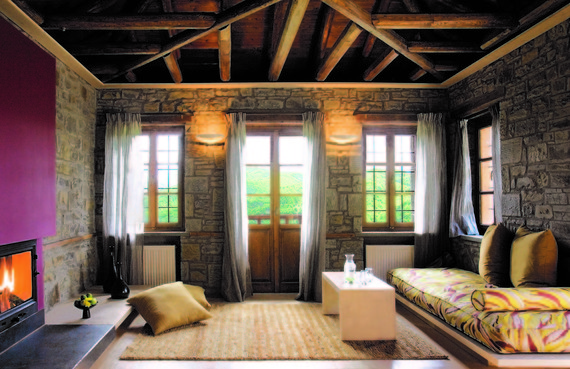 I made the most of the next day, as it was my only chance to get around and see the surrounding areas. Monodendri, a nearby village and larger than Kipi, was one of the stops I made mainly because it's situated around the Vikos Gorge, which is on the slopes of Mount Tymfi, and is the deepest in the world. A hiking trail also leads into the gorge. The view walking down the path is simply breathtaking. At the end of the path, you come across the abandoned Agia Paraskevi monastery, founded in 1413, on the edge of the gorge.
This region remains popular year round with many activities, particularly during the summer period, such as rafting, trekking and horse-riding.The Zagori Race takes place annually, around July, and attracts many people to participate in numerous mountain races. Last year, over 2000 people took part. 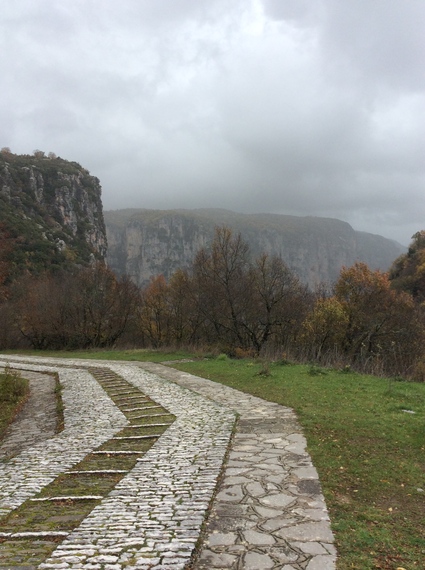 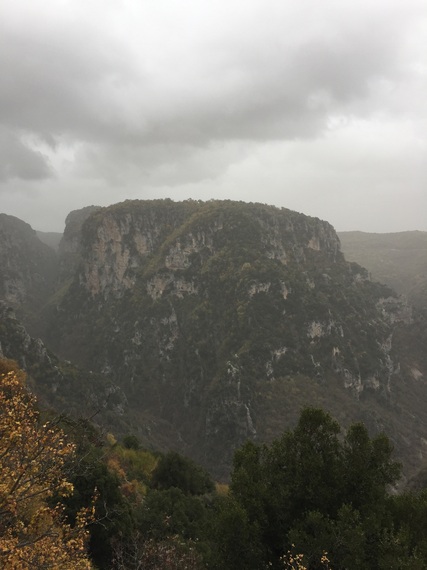 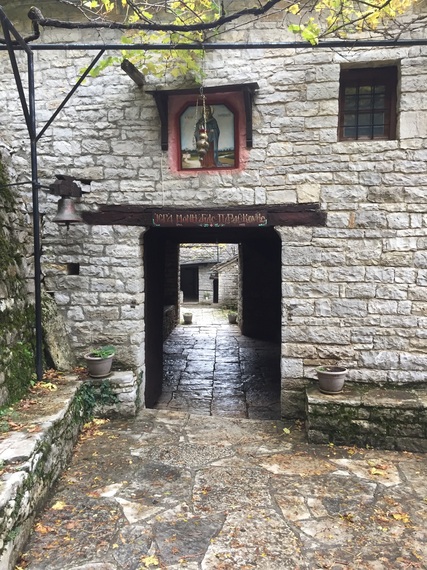 Later in the day, Aris kindly took me around a few locations. I saw the monument of 'The Woman of Pindus' (Pindus is the name of the mountain range), in honour of the women who assisted in defeating the Italians during the Greco-Italian War in 1940, which marked the entry of Greece into World War Two. From the monument, you see the path where the Greek army pushed the Italians back into Albania. We then stopped at Vela monastery, not far the Albanian border. Nearby lies the river Kalamas, known for being rich in flora and migrating birds. The source of the river is near the Kalpaki village, where we made a stop at the local taverna. It was a very eventful day and I enjoyed the discoveries made along the way. You get a sense of the history of the region; a region which has suffered greatly from multiple conflicts. However, the many villages still survive even without the level of tourism that the south of the country and the islands enjoy. 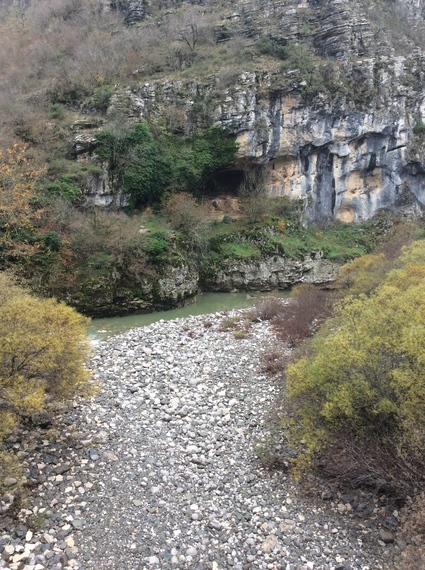 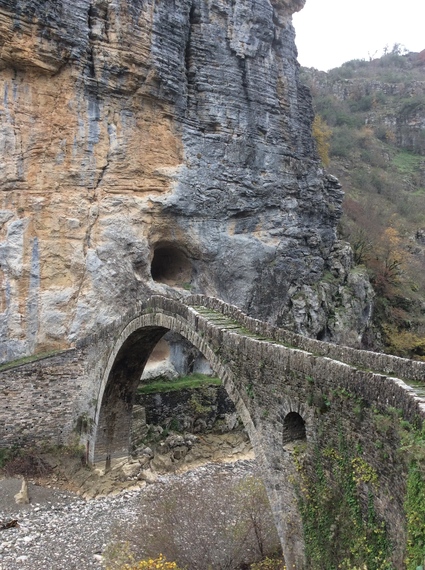 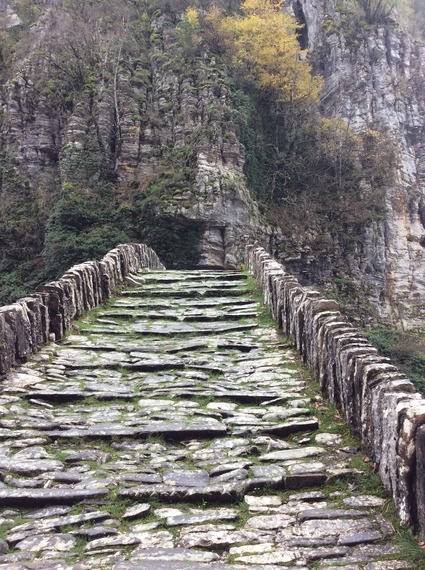 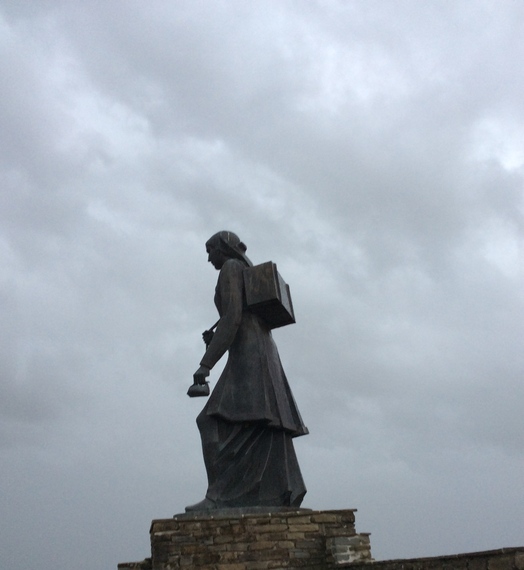 The next morning I was up early as I aimed to hit the road to head home in good time, but not before another breakfast. Aria Hotels put great emphasis on the most important meal of the day and. Guests can indulge in a homemade breakfast using nothing but fresh, local ingredients; marmalade, yogurt and biscuits. The desserts and pies on offer change on a daily basis to add some variety. Additionally, the buffet on offer includes a great selection of cheeses, cold meats, eggs, fruits and natural juices.
Afterwards, while checking out, I noticed an upcoming special pre-Christmas offer from December 16th-18th that was being advertised at the reception, which includes two nights in an elegant suite, with 30% off for the second night. The offer also includes a homemade breakfast and dinner at the Kipi Bites restaurant. You can also take up the opportunity of a tour guide around the Zagori area. The offer also allows some flexibility with an early evening and late check out possible, which is very helpful for those like me, who want to maximise their time.
So after a very enjoyable and eventful couple of days it was time to get going, but not before booking my next stay. I've booked to return to Kipi Suites with my girlfriend for a few days between Christmas and New Year. I can't think of better surroundings to spend that time of year.
Heading back to Athens after my short but eventful trip puts me in my patriotic mood again. The sheer diversity and extraordinary history of this country should never cease to amaze anyone whether they're Greek or not. Thankfully, in spite of all the past and present hardships Greece has faced in recent years, tourism is on the up again. So if any of you reading this happen to be thinking of visiting, whether for the first time or not, don't by any means rule out the north of the country. Yes, the islands are unique, but this region has an identity of its own. If you do decide to replicate my trip, stay with Aria Hotels as they will show you a good time. Having a home away from home always helps. That combination makes it a no-brainer.