It's early November and I've decided to take advantage of the low-season period as Christmas and New Year appear on the horizon. Having lived in Athens on and off for the last six years, I've naturally visited a countless number of the islands that Greece has to offer as well as the Peloponnese region. Although I say this with a shade of embarrassment, I had until now never explored the north of the country; a region which exemplifies the diversity of Greece with its mountainous terrain that one might associate more with Northern European countries.

Last summer, I went island hopping and beforehand I'd looked to see whether or not it was possible to find a hotel group that had bases on each island in order to have a familiar feeling of the accommodation. That's when I came across Aria Hotels; a small family-owned boutique hotel and villas company. I stayed in 3 of their bases on the Cyclades islands of Serifos, Milos and Kimolos, which was a very enjoyable experience. Once I found out that they also had two hotels on the mainland, I decided to make the trek up from Athens.

The drive from Athens was admittedly a long one. The most recommended route is via the Rio-Antirio Bridge, which crosses the Gulf of Corinth. From there you make your way up towards the city of Ioannina. The much-anticipated new Ionia motorway/freeway is set to open early next year, thus cutting the journey time to from Athens to the northwest dramatically.

Metsovo is a town in Epirus located within the Pindus mountain range and is a popular tourist attraction particularly during the winter months. Thessaloniki, the 'co-capital' of Greece is a couple of hours drive away, which is partly why Metsovo is described as the 'Arahova of the north'; (Arahova is a similarly popular mountain town located nearer to Athens). As you approach the main village, you notice the bright red rooftops nestled into the mountains, which adds to the scenic view.

The Katogi-Averoff Hotel & Winery, member of Aria Hotels is unique in that it is a combination of the two; in fact, it is a pioneer of the wine tourism given its location some 1100 metres above sea level. The receptionist, Eleni, welcomed me and she was eager to ensure that I was happy with my room, which was luxurious and very spacious. It also had a great view of the surrounding mountains. The hotel had a nice and cosy old-style to it, in line with the architecture of Metsovo, with the dining room adjacent to the inviting fireplace. 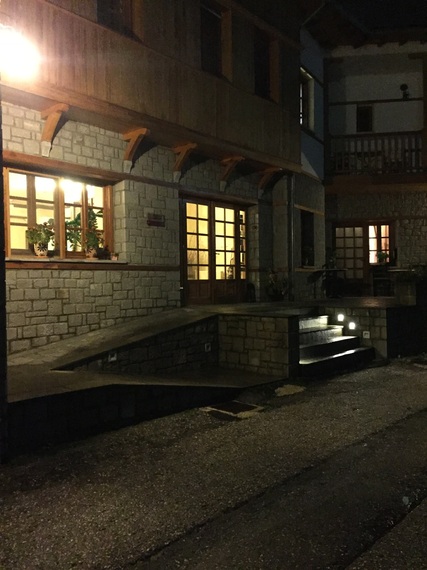 Something else that caught my eye at the reception was a special offer titled 'The Food and Wine treasures of Metsovo'; a special offer over the weekend of December 2nd-4th, which entails a number of activities, such as visits to the Folk Art Museum of Metsovo and the E. Averoff Gallery. Also included is a visit to the winery next to the hotel, which also features the wine tasting experience that I had read of prior to making the trip. Additionally, you can also benefit from the great local food on offer, such as the Greek Breakfast; designed with the purpose of giving visitors the experience of local Greek products and local dishes the region has to offer.

After the long drive, I was looking forward to taking advantage of the local gastronomy, which Aria Hotels evidently pride themselves on. I went for a big portion of veal and rice, which was great. One definite suggestion is to go for the local cheeses as they combine very well with the native wine. The winery, right next to the hotel, is definitely my first stop, but that would wait until the next morning as I decided to opt for an early night.

After a good breakfast, again involving traditional products from Metsovo, I headed to the winery and took up the option of the 30-minute tour. Evangelos Averoff started the winery in the late 1950s and today it produces over 700,000 bottles per year. The winery houses over 1200 oak barrels. As the tour progresses', you encounter works of art as well as a visual guide of the wine making process. In addition, there is also the opportunity for wine tasting, which makes for an intriguing tour all round. The Yiniets vineyards, on the slopes of Mount Pindus lie at an altitude of around 1000 metres making it the highest vineyard in Greece. 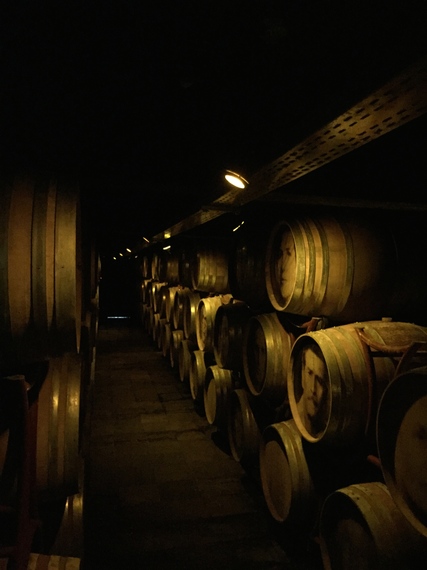 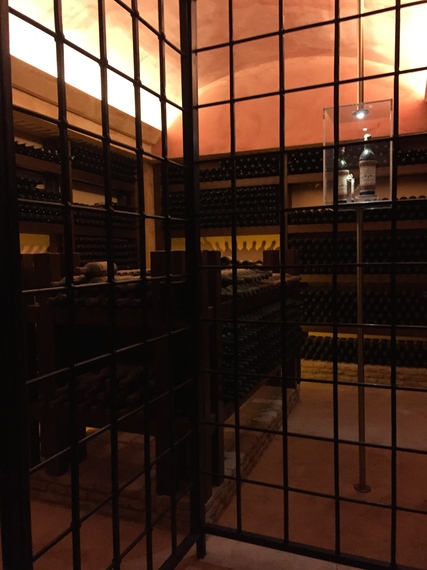 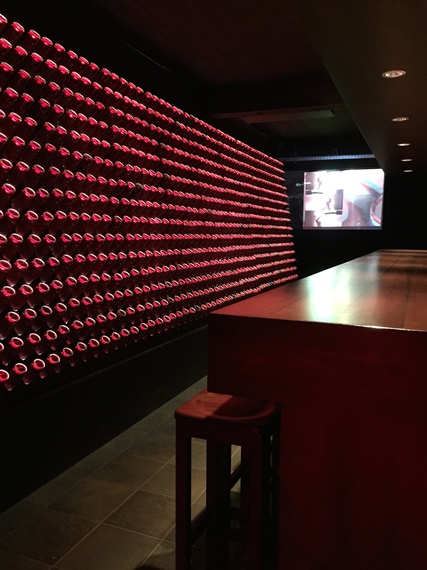 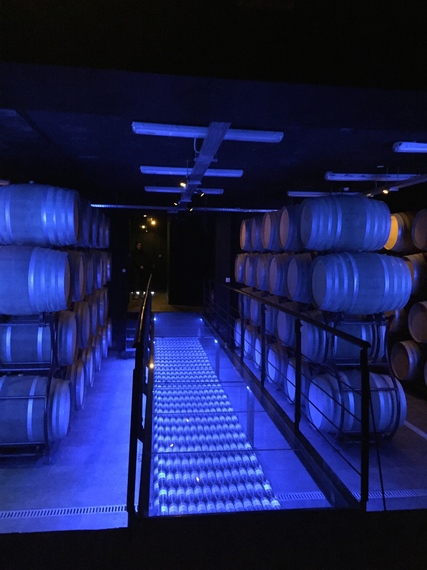 A walk through the town later in the day revealed what seems like a close-knit community here. There is also plenty to see. The Averoff Art Gallery, opened in 1985, contains various paintings and sculptors by Greek artists. The 15th century church of Agia Paraskevi along with the Monastery of Agios Nikolaos are also worth a visit. Lake Pigon is also worth a visit for those willing to drive a half hour or so. Although my visit came too early for the ski season, being an avid skier myself, I would have taken advantage by visiting the nearby Pindos of Karakoli and Politsies, at altitudes of approximately 1500 and 1600 metres respectively, and both offer varying levels of difficulty. Another must is to pay a visit to the Metsovo cheese factory, founded in 1958. The factory is known to constantly experiment and create new products to add to their already established ones. The notable local cheeses are Metsovone and Metsovela. Along with Metsovo's renowned Katogi Averoff Winery, it makes for a great blend. 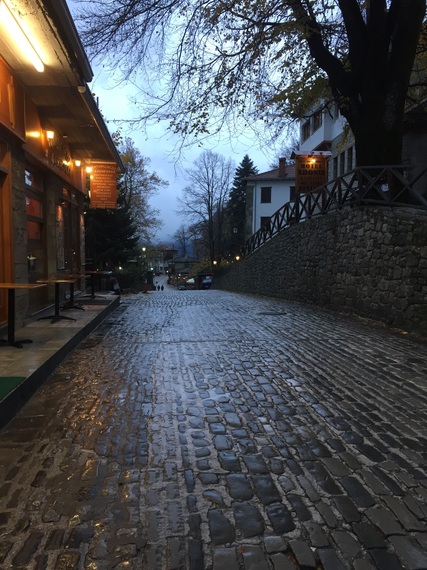 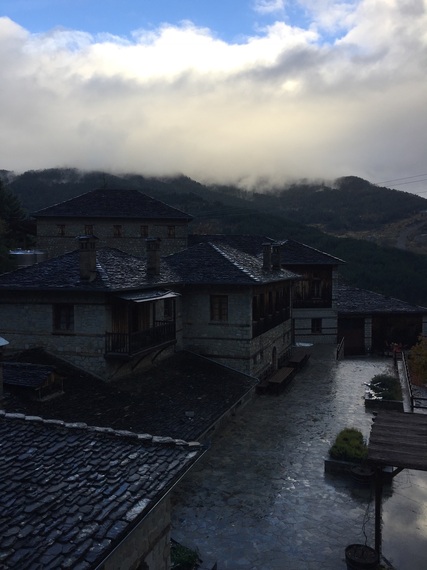 After a productive day of discovering what Metsovo has to offer, I headed back to the hotel for a light dinner accompanied by a glass of Katogi Averoff collection. I'm planning to leave early the next morning to make my way to Kipi Suites, a couple of hours away within the Zagori region. Something I've noticed about Aria Hotels, with this stay and my previously mentioned visits last summer, is that they retain their identity in each hotel, which is something that others lack, but at the same time each hotel offers something different. With that in mind, I'm intrigued to see what Kipi Suites, in the heart of Zagori, has to offer. I hope my first leg of the Northern Greece experience has whetted your appetite enough to read about my second destination in Kipi. Check out my blog for Part II, coming soon.