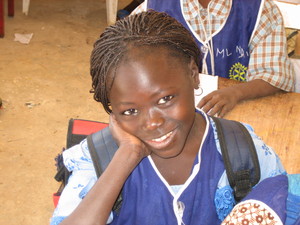 Backpacks are everywhere this time of year, cluttering the entryways and living rooms of most homes with school-age children. They are carelessly thrown over chairs, buried under jackets and sometimes left overnight in classrooms. At The Global Fund for Children (GFC), we believe that a backpack -- both figuratively and literally -- can change the course of a young girl's life in the developing world. Yes, we believe that the humble backpack is transformative. Let me explain why.

For adolescent girls in the poorest parts of the world, the journey from age 12 to age 18 is fraught with challenge. Beyond the usual teenage angst, these girls contend with the transition from primary to secondary school, the possibility of HIV infection or early pregnancy and the risk of early marriage. Gender-based violence and harassment on the streets begin or become elevated during this time, often impeding a girl on her path to greatness.

But what if we could equip girls with the tools to navigate this path successfully and emerge as young adults ready to become great contributors and leaders in their community, their nation and the globe? What if the metaphor of the backpack -- a symbol of learning, mobility and independence -- and its contents could help girls control, and indeed transform, their own destinies?

At The Global Fund for Children, we have thought long and hard about what we would put in each backpack to ensure that every girl has a safety net and a launching pad to a secure future. Here's the packing list:

At The Global Fund for Children, we believe that small amounts of money, when given to enterprising local community leaders, can make a lasting impact on children's lives. Small investments, big returns. We give funding to organizations that work with both boys and girls to improve their health, their education, their well-being and -- eventually -- their ability to turn dreams into reality. While distributing actual backpacks is not the answer, the items we wish for every child in the world could make a difference between being diverted onto a road to despair and navigating a path to success.

The next time you walk past a backpack in your own home, please think about what you can do to help a child who lives in poverty somewhere in the world. Small acts of generosity can bloom into large-scale change in the life of a child.