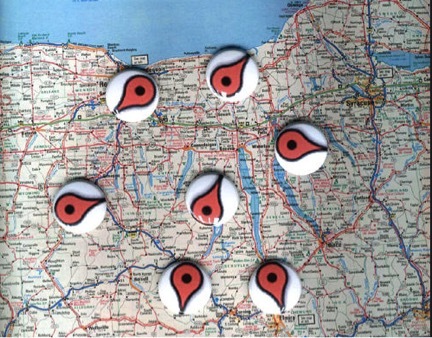 Cities are re-emerging as a central hub for innovation. This is nothing new. People have been talking about the city and locality as the place for more innovative politics since Athens emerged as the premiere Greek city-state. Unlike a large federal government, cities provide more opportunities for citizens to feel directly connected to governance.
In his 1967 Presidential address to the American Political Science Association Robert Dahl articulated a vision for "The City in the Future of Democracy."

"In this vision, the city-state must be small in area and in population. Its dimensions are to be human, not colossal, the dimensions not of an empire but of a town..."

In the 21st Century, digital technologies provide opportunities, and challenges for improving service delivery and quality of life in urban settings. It's not that these solutions are all "high tech." Some employ relatively intuitive and simple-to-use technology in a way that facilitates a transformed relationship between citizens and the state.

One way cities are consolidating innovation is through the creation of Innovation Labs. The labs' goals are to use technology to more creatively engage citizens in problem solving and improve public sector performance. This often includes bringing external experience and the creation of new job posts such as Chief Innovation Officer, Chief Information Officer, or Chief Data Officer. The number of U.S. cities creating these labs continues to grow, including cities such as Kansas City, MO and Austin, TX.

Philadelphia just launched their own lab, after their Academy of Municipal Innovation training program for city employees won "Innovation of the Year."

Chicago is also bringing together diverse stakeholders to improve residents' lives through technology. For example, the Smart Chicago civic collaborative brings together diverse stakeholders to apply technology and innovation to a set of core policy areas for urban vitality. The founding partners include the City of Chicago, the MacArthur Foundation, and the Chicago Community Trust. This initiative includes advancements in city services, health, education, technology infrastructure and open data. The Smart Chicago paradigm is a promising model for other cities interested in bringing digital services to citizens while building broad coalitional support.

Much more research is needed to understand precisely which innovations work best in cities. Technology can make our cities more efficient and effective at their core functions. This requires responsible use of technology that puts people and communities first. If urban level governance is increasingly dependent on technology it will be critical to address the digital divide and ensure equity throughout innovation planning and deployments.

There are also basic capacity and resource questions. In times of austerity, investments in technology and innovation infrastructure, with often-expensive upfront costs, will by necessity detract from other program areas. The resources needed require "a fundamental rethinking of how resources should be deployed," according to Alissa Black and Rachel Burstein in the New America report "The 2050 City: What Civic Innovation Looks Like Today - and Tomorrow." Building multi-stakeholder partnerships will also be an essential component of addressing these gaps. It is important that innovation does not simply focus on short-term performance over long-term structural changes with capacity building.

Bringing cities into the 21st century requires both applying innovative strategies and recognizing the public servants and services that have worked well in the past. Bringing in new talent, however, cannot deter governments from building capacity and equipping workers with the newest skills. There are exciting opportunities to understand lessons learned and share opportunities across cities. With technological advancement and collaboration, we can make our cities the best version of ourselves.