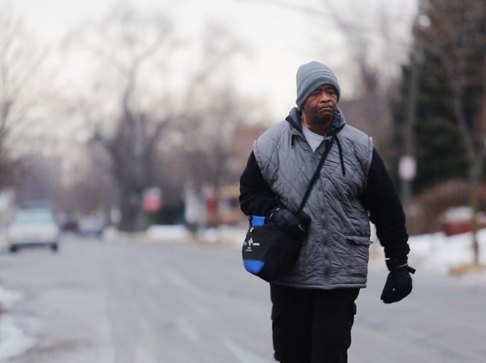 It wasn't what anyone had intended.

By now you probably know his story: James Robertson, the Walking Man of Detroit, has become a national symbol of hard work and dedication. After the city cut bus service to his neighborhood, Robertson began hiking a total of 21 miles to and from the closest bus stop. The commute to his job at a suburban factory lasted longer than his eight-hour shift.

A banker saw Robertson making his daily walk and started giving him rides. Naturally they got to talking. The banker saw in Robertson a man of dedication and integrity. So he took Robertson's story to the Detroit Free Press.

The publicity might have been the answer to Robertson's hopes and dreams--except that it utterly upended his life.

The story went viral, people started sending donations to Robertson via a web site, and a car dealership gave him a brand new Ford Taurus. Within two weeks of the article's appearance, well-wishers had contributed $350,000 to help him--so much money that he no longer felt safe in the boarding house where he had lived for 15 years. Police moved him to an apartment in an undisclosed location.

This is a great depiction of the best and worst elements of human nature.

We are a people who long to help rescue those in trouble. When we're touched by a story about someone we don't know, our immediate impulse is to send donations. And why not? Money solves problems. If James Robertson's car hadn't worn out, if he'd had the cash to buy another, he wouldn't have faced such a difficult commute.

But receiving a windfall is often a mixed blessing. When he asked for their protection, Robertson told police he knew a man in his neighborhood who had been murdered after winning $20,000 in the lottery.

Suppose the banker who gave Robertson's story to the Free Press had chosen a different tack. Instead of contacting a reporter, suppose he had arranged for a group of volunteers to make sure Robertson always had a ride to the bus stop and a ride home. Robertson's life would not have been disrupted, and a circle of caring people would have had the pleasure of getting to know him.

I can hear the instant protests: Who has time to give a guy a 10-mile ride, even once a week? Good question. But in a more open world, in a less harried existence, such an idea wouldn't seem so outlandish. And in a society with functioning city governments, the buses wouldn't have been halted.

Elizabeth Renzetti of the Toronto Globe and Mail raises an interesting point when she notes that Robertson's former neighbors are still without city transportation. She laments the rise of what she calls misery fundraising. As "the social safety net frays," she writes, "the needy and desperate have turned to websites such as HandUp, GoFundMe, and YouCaring to meet their most basic needs." People with enough computer savvy and the skill to tell a compelling hard-luck story will attract financial help, possibly much more than they need. Others won't.

What will happen to James Robertson now? Perhaps you're thinking, "A new car and $350,000! What's wrong with that?" Quite a bit, possibly, but for now it's difficult to know. It will likely take him months to decide if his new savings account is worth the displacement he's experiencing. My hope is that he'll land in a community of people who will befriend him--and not ask him for money. That's what he deserves.

Giving money to worthy causes is a vital part of selfless service. It's my belief, though, that what will save this world is a growing corps of people who are willing to go out of their way for someone else, who'll take a chance and say, sure, I can give that guy a ride. In return for their loving attention, they'll receive the satisfaction of knowing they've really helped someone. Perhaps they'll also receive a priceless gift--a new relationship with someone extraordinary, whom they otherwise wouldn't have encountered in the course of their daily lives.