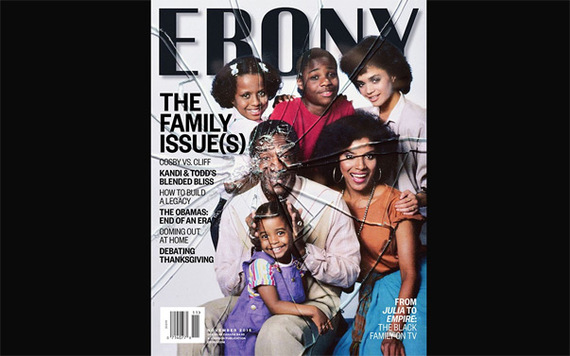 Ebony Magazine released the cover for its upcoming November issue. The cover features a shattered picture of the fictional Huxtable family. The featured story is entitled "Cliff-hanger: Can the Cosby Show Survive? Should it? Since the first publication in 1945 Ebony has been a staple in the Black community. It has served as a microphone to often muted voices and has earned respect throughout generations of families.

On a much smaller, more personal scale, Ebony magazine is as ingrained in my childhood memories as the images of my Nanny's living room. The plastic covered sofas were positioned directly in front of the large floor model television that probably stopped working before I was born, but doubled as a faux stand for the smaller model. Watching The Cosby Show on the smaller TV and training my mind to ignore the broken larger floor model on the bottom became the norm after a few years. In fact, it never seemed strange to me until visitors were invited over and someone asked "what's up with that broken TV? How do you just ignore it and watch the other one? And why is it still here if it doesn't work? I was so accustomed to the "big TV little TV" set up that it didn't seem odd until somebody actually said the words out loud. How could I view it as odd? My aunt and mom had the same set up for years. When the questions were originally posed I was shocked, uncomfortable and then offended. How dare somebody question something about our home? How dare somebody put a spotlight on something BROKEN in OUR home? I didn't care if it was broken ...it was OURS. And wait...did they just talk about my momma?

Searching for an appropriate response to those questions was just too much work. How do you articulate exactly how easy it is to condition your mind to ignore something broken while your focusing on something you in enjoy? The much easier option was to be enraged at the visitor for stating the obvious.

The newest issue of Ebony magazine triggered a similar reaction and a whirlwind of questions. A crack in the picture of OUR fictional family? The Huxtables are ours. Somebody is asking about something broken in OUR home? We see it. We know it's there. How dare they bring it up? But do they know how pivotal the Cosby Show was to communities like mine? The Cosby Show depicted images that were invisible in many NY projects. These images helped shape life goals for some of us. A multilayered Black mom on TV? A crack in this picture? Did they just talk about my momma? Should this show survive? These questions are not only uncomfortable, but it's snatching some of us out of our comfort zone. We don't want to address it. We want to focus on the amazing body of work and ignore what's going on underneath.

As tempting as it is to be upset with Goldie Taylor for writing the story, perhaps we should explore the feelings and address the questions they are triggering. Plus, I hate to state the obvious but Ebony magazine didn't manufacture the rape allegations. They are real. The damage is real. Regardless of what's more comfortable to focus on, the pain is real and the legacy is already tainted.

Unlike the "invited company" that poses questions about the obvious broken pieces in our homes Ebony is more like a bold cousin saying " what's up with that big TV little TV situation? "Let's talk about this. What should we do about it?" I don't know what the story will entail but the topic of Bill vs. Cliff and the survival of the Cosby show is a conversation we need to have and I trust the people initiating it. Regardless of how you feel about Bill Cosby, the need for this conversation is as blatant as that broken TV operating as a stand