Co-authored with Kjølv Egeland, Advisor, International Law and Policy Institute As we write this blog, the parties to the Treaty on the Non-Proliferation of Nuclear Weapons (NPT) are gathered in New York to discuss the past and future five years in the treaty's life. National delegations are desperate to achieve consensus on an outcome document to determine the next steps for disarmament. History suggests, however, that the adoption of such a document will have zero effect on nuclear stockpiles.

The first two weeks of the NPT Review Conference saw national delegations read set-piece statements, but the second part is all about negotiating an outcome document that will determine actions for the 2015-2020 review cycle. As before, disarmament is the most divisive issue also this year. While most non-nuclear-weapon states consider nuclear disarmament a matter of urgency, the nuclear-weapon states predictably regard it as a long-term goal, or mere "vision," at best.

The review conferences' success or failure is usually measured by whether or not the parties agree on an outcome document. After all, outcome documents are adopted by consensus, and consensus, by definition, means that everyone agrees. Consensus is difficult, however: the NPT parties have thrice failed to reach one (1980, 1990 and 2005). These occasions are often described as "failures," "disappointments," or even "disasters," because the nuclear-weapon states would not agree to outcome documents that called on them to disarm. In contrast, "successful" NPT review conferences adopt outcome documents intended to advance the treaty's stated aims of nuclear disarmament, non-proliferation and facilitation of the peaceful uses of nuclear energy. For example, the outcome documents from 2000 and 2010 both "unequivocally" affirmed that the nuclear-weapon states should take steps to accomplish "the total elimination of their nuclear arsenals leading to nuclear disarmament."

Before and during this year's conference, some governments and independent analysts expressed their hopes that an outcome document would be adopted. Many states insist that a step-by-step approach inside the NPT framework is the most viable route to disarmament and, as they like to point out, there are no "shortcuts" to a world free of nuclear weapons. This raises the question of whether there is in fact a correlation between the successful adoption of an NPT outcome document, on the one hand, and a reduction in the number of nuclear weapons during the following five-year period, on the other. One may also ask whether the failure to adopt such a document results in the growth or stagnation of nuclear stockpiles. In other words, is there really a functioning, multilateral "long road" to disarmament?

As it turns out, no such correlation exists.

The table below shows the results of a bivariate correlation between the number of nuclear weapons in the arsenal of each NPT nuclear-weapon state, and whether the preceding five-year period had an effective NPT outcome document. For those with a faith in the NPT disarmament process, these results are disheartening.

It so happens that the adoption of an outcome document in all cases is associated not with disarmament, but with armament. Due in part to the low number of observations (there are only 14 five-year cycles since the start of the nuclear era in 1945), we cannot be sure that this overall association is not due to chance. Only in the case of the UK can we confidently say that the adoption of an outcome document is systematically associated with armament: when the NPT adopts an outcome document, the UK's nuclear arsenal grows. As for China, France and Russia, we can only be reasonably sure that the relationship holds (with 85, 80, and 70 per cent confidence, respectively). When it comes to the U.S., an outcome document appears to have no statistical association with disarmament whatsoever.

The following graph shows how the five NPT nuclear-weapon states' arsenals have evolved over time. Those years in which a successful outcome document was adopted are flagged with blue dots. "Failures" are flagged with red dots. As is evident from this graph, it is difficult to detect any relationship between outcome documents and stockpile sizes. (Keep in mind that China and France did not accede to the NPT until the early 1990s.) 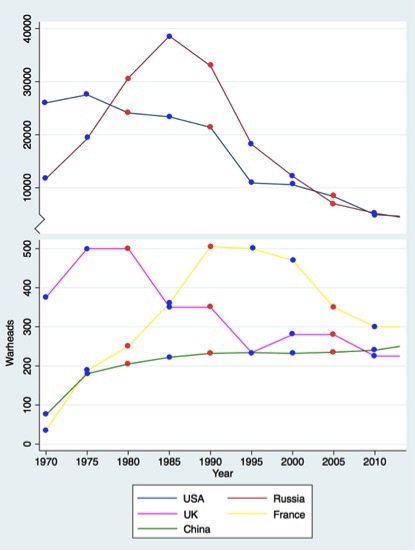 This admittedly limited statistical analysis nevertheless suggests that the NPT is not particularly effective as a disarmament treaty. With or without outcome documents, other factors determine stockpile sizes. And yet, the "success" or "failure" of NPT review conferences continues to be premised on the adoption or non-adoption of an outcome document. We suggest that this be rethought.

As its name reveals, the Non-Proliferation Treaty was intended primarily as a tool with which to stem the horizontal spread of nuclear weapons. It has done so quite well, and the NPT is indeed a valuable legal instrument in that respect. When it comes to disarmament, however, it is time to think afresh. A nuclear-weapon free world will need new international legislation. Seventy years after the bombing of Hiroshima and Nagasaki, it is well and truly high time.