The National Rifle Association (NRA) staff headquartered in Fairfax, Virginia is generally a tightly-controlled, secretive lot. While NRA board members like Ted Nugent, Ken Blackwell and Charles Cotton are prone to rant and go off-message, one usually gets the sense that such behavior is curtailed at the staff and executive level.

Since Newtown, however, there have been some illuminating moments suggesting that the premier gun lobby might not be able to control its worst impulses as well as we think. In June 2014, the organization issued a remarkably sensible statement about the Open Carry of guns ("Let's not mince words, not only is it rare, it's downright weird and certainly not a practical way to go normally about your business while being prepared to defend yourself."), only to reverse their position just 24 hours later ("Our job is not to criticize the lawful behavior of fellow gun owners."). That internal dust-up received quite a bit of media attention.

An even more disturbing NRA revelation was largely ignored by media last week, however. On October 20, the NRA tweeted a link to a blog post by North Carolinian and former PJ Media writer Bob Owens with the text, "Make no mistake, anti-gunners are 'calling for forcible disarmament.'"

Make no mistake, anti-gunners are "calling for forcible disarmament..." #2A https://t.co/Ou0AIpdu3R

The blog post, titled, "Gun Confiscation Fantasies are Fast-Tracking the Democrat Party to Destruction," is a deeply insurrectionist screed in which Owens fantasizes about a violent civil war with Democrats who support gun reform. In Owen's words:

I merely hope that we get to the 2016 elections ... These radicals are pushing hard for action [on gun laws], now, and they're proving with every passing day that reason and constitutionality are the least of their concerns. We do not want a civil war against the radical left wing of the Democrat Party, but let it be made abundantly clear that if they start one, they will be utterly destroyed by armed free citizens, as the Founders intended.

Accompanying the blog post is a photograph of a gallows with the caption, "This is where the survivors of the Democrat rebellion will meet their end." 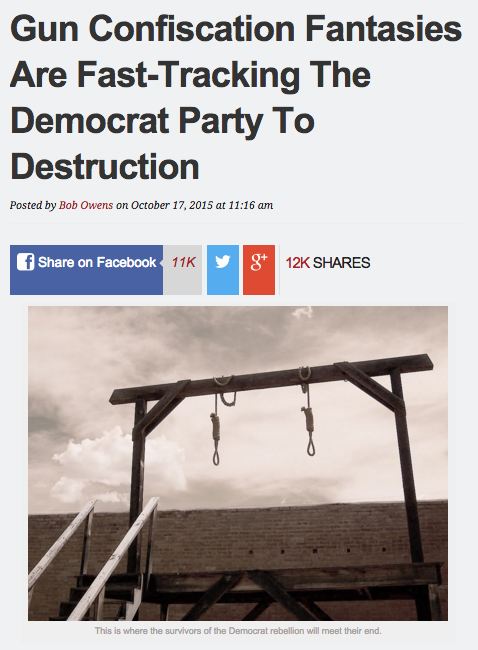 I've been writing about the NRA's insurrectionist ideology for quite some time at this space, and they are normally careful to skirt any outright call for political violence. In sharing Owens' piece, they seem to have crossed a line. 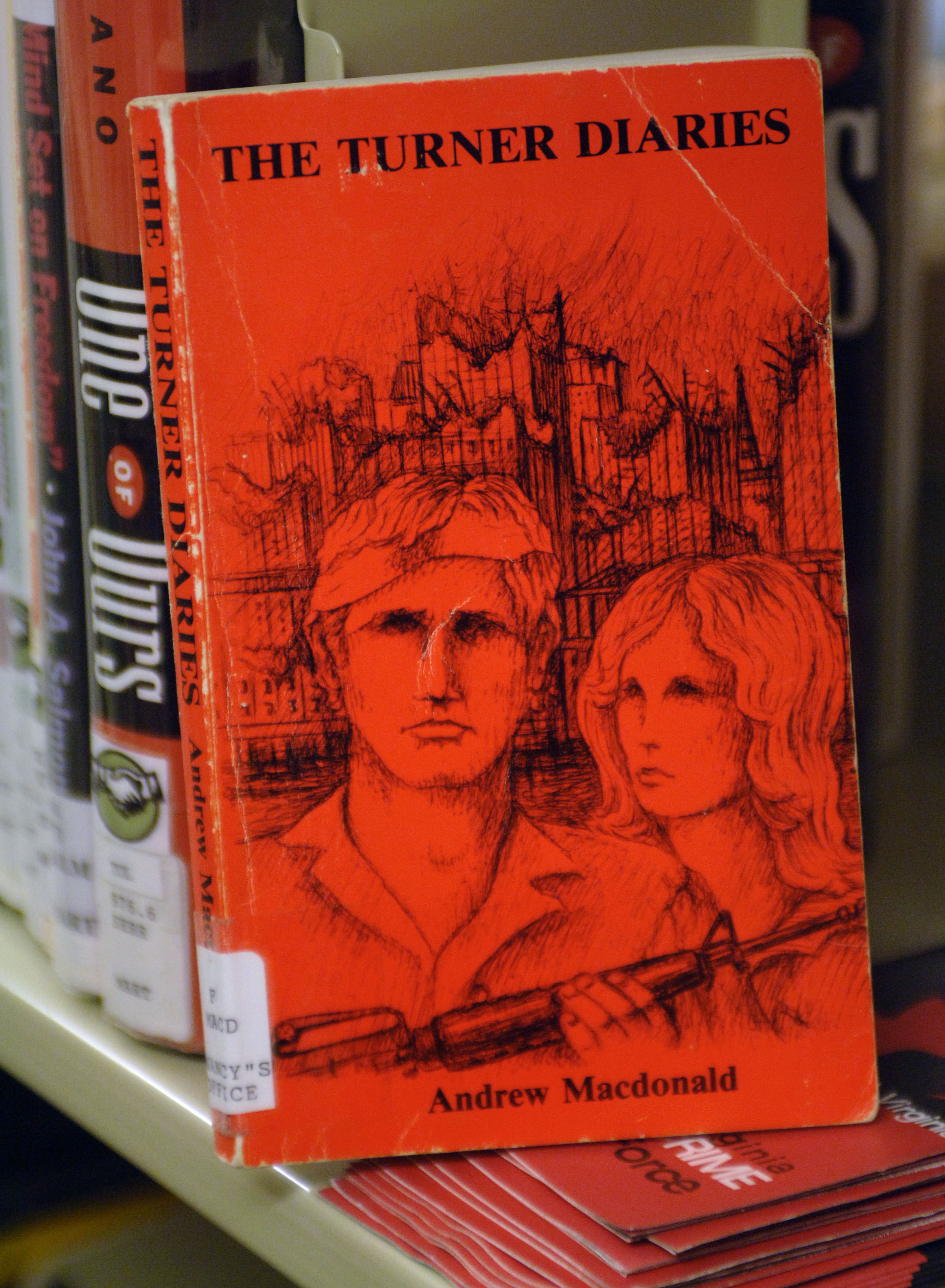 There is nothing new about Owens' fantasy about gallows and the mass execution of Liberals who support gun violence prevention laws. It dates back to The Turner Diaries, a novel written by the neo-Nazi William Luther Pierce in 1978 under the pseudonym Andrew Macdonald. The novel envisions a violent revolution spurred by the enactment of new gun laws sponsored by a Jewish Member of Congress. Pro-gun activists win the war, then round up survivors who supported the legislation and execute them en masse, including by hanging. The novel was published just one year after the NRA's "Cincinnati Revolution," in which insurrectionist hardliners took control of the organization at its annual convention. Timothy McVeigh called The Turner Diaries his "Bible." To this day, you can find it at virtually every gun show in America (along with an NRA recruitment booth).

The lynchpin here, of course, is the perverted and dangerous idea that the Second Amendment provides an individual right to engage in violence against government officials (including law enforcement and military service members) when one personally believes our government is acting "tyrannically." Needless to say, our Founders didn't take kindly to this idea (see Shays' Rebellion and the Whiskey Rebellion). Nonetheless, the NRA has promoted insurrectionism to the point that it has become the foundational belief of the modern pro-gun movement, with even "sensible" high-profile Republicans like Florida Senator/Republican presidential candidate Marco Rubio advocating its tenets.

Now that the NRA is embracing those who are openly fantasizing about shooting and killing Democrats in the post-Tucson (mass shooting) era, will some of those high profile supporters begin to distance themselves from the organization and its toxic ideology? Probably not, given the media's lack of attention to the group's latest threat.

That's a shame, because there is a real danger here that the next Timothy McVeigh is out there, taking all this violent rhetoric in, and preparing to act.

There is a silver lining here for those of us who care deeply about gun violence, however. The way I see it, there's one of two possibilities concerning this tweet. Number one, an NRA communications staffer lost his/her cool about the current political winds concerning the gun issue and shared Owens' colossal temper tantrum ("If we can't get our way on gun policy through voting, we'll kill you instead!") without thinking carefully.

Number two, the tweet was given careful thought, and the NRA believed that such a threat was necessary to help forestall gun reform given the current political climate. That means they are losing confidence in their traditional means of persuasion -- bare-knuckle backroom political deals and barrels of campaign cash.

The energy level in the gun violence prevention movement has been off the charts since the terrible tragedy at Umpqua Community College, and Owens' post strikes me as the desperate cry of a man who knows his guns will not afford him control over others for much longer. That the NRA would stoop so low to share it is proof positive that gun violence prevention activists are making serious progress and scaring the biggest dog on the pro-gun side.