The National Rifle Association's 2014 annual meeting starts today in Indianapolis and, according to the NRA's website, it will feature "spectacular displays of firearms" and "products from every major firearm company in the country."

Such breathless gun industry rah-rahing is no surprise. The giant firearms industry trade show of new guns that anchors the event long ago pushed aside the "Annual Meeting of Members" as the convention's main draw (and, not to worry, the "carry of personal firearms" will be permitted in the Indiana Convention Center and Lucas Oil Stadium where NRA events are being held).

At the same time, the NRA is increasingly targeting members of the gun industry as a new revenue stream. Since 2005, gun industry "corporate partners," as the NRA likes to call them, have donated between $19.3 million and $60.2 million to the organization as detailed in Blood Money II: How Gun Industry Dollars Fund the NRA, released last September by my organization, the Violence Policy Center. This partnership will be on full display at the annual meeting -- which itself is sponsored by firearm accessories vendor MidwayUSA, the NRA's top corporate donor which has given the organization nearly $10 million through its "Round-Up" program alone.

Gun manufacturers are the official sponsors of numerous events at the annual meeting -- and sponsorship opportunities abound. For example, the "pre-show sponsor" for the "Stand and Fight Rally" featuring Oliver North and Sarah Palin is Remington Outdoor Company, formerly known as Freedom Group -- the company that made the Bushmaster assault rifle used to kill 20 children and six educators in Newtown, Connecticut, in December 2012.

Beyond the annual meeting and throughout the year, gun industry members sponsor a variety of NRA programs. The NRA's "Life of Duty" programs, which include an online magazine titled American Warrior and free one-year $50 NRA memberships (the usual price is $35) for military and law enforcement, count sponsors that include assault rifle manufacturers Bushmaster, Colt's, FNH USA, Smith & Wesson, and Sig Sauer. The NRA Women's Network is sponsored by Smith & Wesson -- the company that manufactured the M&P pistol used at the recent shooting at Fort Hood, as well as the M&P assault rifle used in the July 2012 shooting at a movie theater in Aurora, Colorado (M&P stands for Military & Police). And the NRA's New Energy marketing program targeting women ("Meet the fresh faces of the NRA who are making a difference") is also sponsored by Remington. 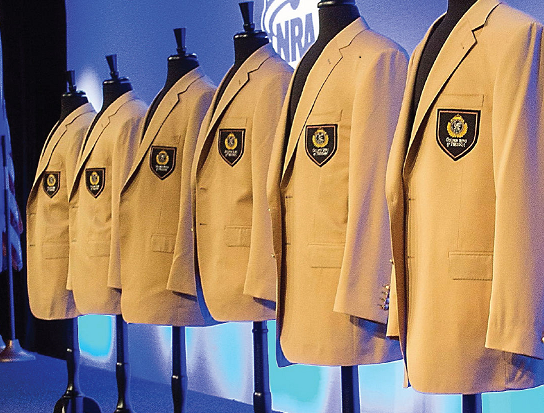 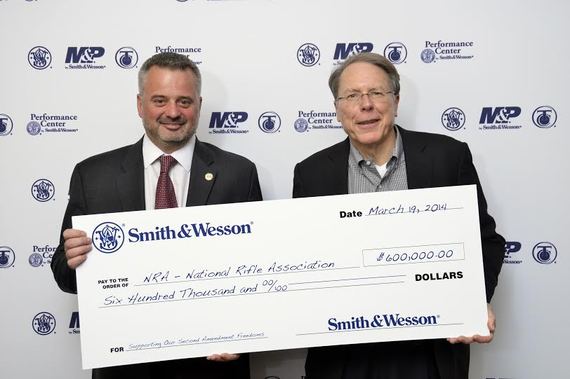 Just last month, NRA Executive Vice President Wayne LaPierre visited Smith & Wesson's headquarters and received a $600,000 check from the gunmaker. Smith & Wesson CEO James Debney pledged to work hand in glove with the NRA, stating: "Through its various programs, pro-gun reform legislation, and grassroots efforts, the existence of the NRA is crucial to the preservation of the shooting sports and to the entire firearms industry." In an earlier NRA Ring of Freedom promotional video, Debney was even more blunt: "I think it's important for everybody to step up and support the NRA. They are our voice."

The NRA has done much to earn Debney's praise and Smith & Wesson's (and other gunmakers') dollars. According to LaPierre, in an incredibly fortuitous coincidence for its industry funders, "the strongest defense of the Second Amendment is the marketplace." And, in an article titled "Stand and Fight" in the February 2013 issue of the NRA's America's 1st Freedom magazine, LaPierre goes so far as to equate buying a gun with political action:

Since the election [of Barack Obama], millions of Americans have been lining up in front of gun stores, Cabela's and Bass Pro Shops exercising their freedom while they still have it. They are demonstrating they have a mass determination to buy, own and use firearms. Millions of Americans are using market forces like never before to demonstrate their ardent support for our firearm freedoms. That's one of the very best ways we can Stand And Fight....

Give that man a giant check.