As far as I know, this is actually news.

Keene, the father of a convicted road rage shooter, actually supports banning a category of firearm. Granted, for most people, outlawing machine guns would be a no-brainer, but let's remember the organization we're talking about here.

And, specifically, this guy: Wayne LaPierre.

In 1986, a ban on the manufacture of new fully automatic machine guns for civilian sale was added as a last-minute amendment to the NRA's federal flagship bill of the 1980s the "Firearms Owners' Protection Act," commonly known as "McClure-Volkmer" for its Senate (Jim McClure, R-ID) and House (Howard Volkmer, D-MO) sponsors. (A pool of pre-1986 machine guns registered and controlled under the National Firearms Act of 1934 remains available to private citizens under federal law.) 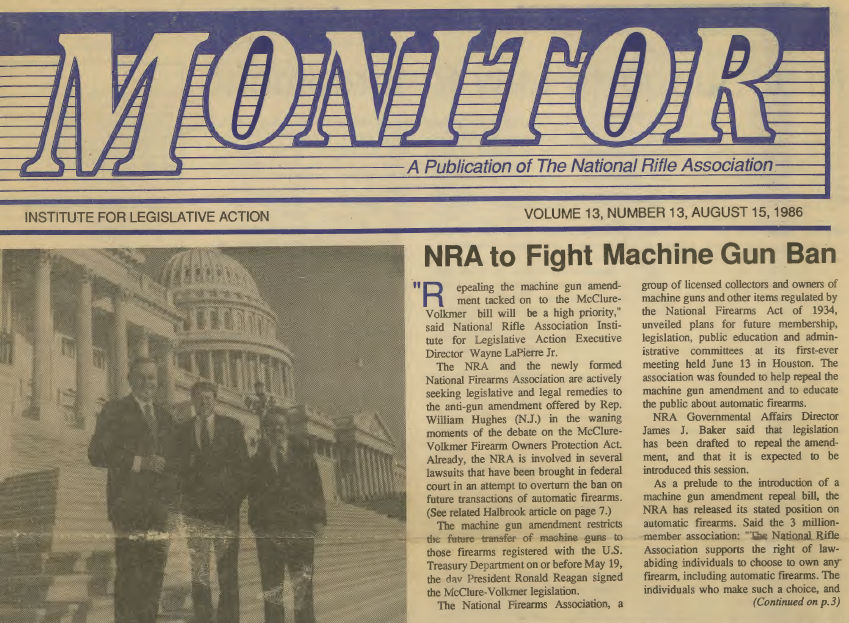 Soon after, LaPierre, then the head of the NRA's lobbying arm, the Institute for Legislative Action (NRA-ILA), announced, "Repealing the machine gun ban amendment tacked on to the McClure-Volkmer bill will be a high priority." LaPierre's promise was bolstered by then-NRA Governmental Affairs Director James Jay Baker, who promised that legislation had been drafted to repeal the amendment and was "expected to be introduced this session." (See inspiring photo above from the NRA's now-defunct publication the Monitor with LaPierre flanked by Baker on his left and then-NRA EVP Warren Cassidy on his right.)

As a "prelude to the introduction of a machine gun amendment repeal bill," the NRA released "its stated position on automatic firearms," which included the following statements:

The same article announced the formation of a new organization, The National Firearms Association, founded to "help repeal the machine gun amendment and to educate the public about automatic firearms." The apparently now-defunct NFA's greatest achievement was the introduction of the "NATO Doctrine" into the pro-gun movement, i.e., "any attack on one type of firearms is considered an attack on all types of firearms." (This exercise in absolutism has been routinely endorsed in such pro-gun conclaves as the annual Gun Rights Policy Conference, which has been financially supported in part by both the NRA and the National Shooting Sports Foundation.)

Not surprisingly, LaPierre's promised educational and legislative campaign "on the sporting uses and legal ownership of automatic firearms" never went anywhere and quietly died. And while later NRA spokespeople have claimed they don't support the ownership of full auto weapons (a perceived public-relations ploy that's up for debate among the pro-gun chattering class and is called into question by reported efforts by the NRA and the American Legislative Exchange Council (ALEC) to limit the rights of communities to ban the possession of such guns), Keene's position that machine guns should actually be illegal is an apparently new one. And to the activist component of the NRA's membership, who are, if nothing else, loyal troops operating under the "NATO Doctrine," this is a distinction with a very, very big difference.

And while I wouldn't hold my breath waiting for a reiteration of LaPierre's 1986 homage to the "sporting use" of full-auto weapons, I'm sure Mr. Keene will soon be "clarifying" his position to appease the hard-core pro-gun activists that the NRA is forced to rely on.