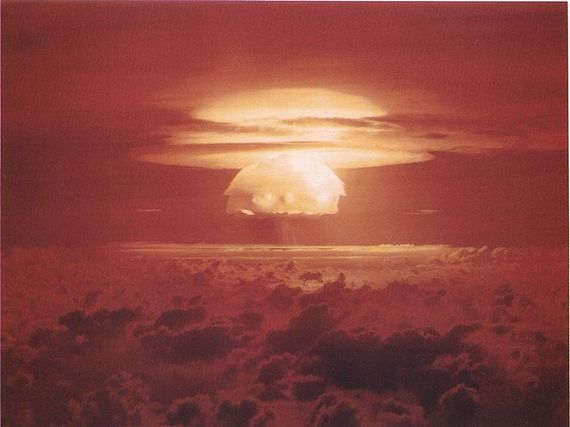 [Image Credit: U.S. Department of Energy, in the public domain.]

What if terrorists in Belgium had employed a crude nuclear or radiological device? Those who have followed news from the attacks know that the premise is not really that far-fetched. The two brothers alleged to have carried out the attacks are also thought to be the same men found surveilling a top Belgian nuclear official at his home in late 2015. While their intent isn't fully understood, this incident and previous ones underscore that the threat of nuclear terrorism is alive and well.

In the coming weeks, Congress will consider funding for nuclear terrorism prevention. Prospects for adequate funding look quite dim. In a preview of what's to come, the House Appropriations Subcommittee on Energy and Water just released its draft bill for fiscal year (FY) 2017 spending. Like the President's own budget request, the Committee's bill decreases spending on nuclear security programs by over $100 million from last year. Moreover, projected funding levels will be approximately 50 percent lower than what was anticipated in Obama's FY 2013 budget requests, as the Harvard Belfer Center explains in a new report.

While historic U.S.-Russia cooperation on nuclear security has been virtually cut off and the Department of Energy has maintained carry-over balances from previous years, neither explanation justifies such an extreme drop in funding, especially given the increased threat.

Rather, intense competition for resources seems to play an outsize role. Nuclear weapons programs and nuclear security are funded out of the same Department of Energy allocation, and with a $1 trillion plan to maintain a nuclear arsenal indefinitely, nuclear weapons are winning the day.

At least some Members of Congress are paying attention. Senator Dianne Feinstein (D-CA), Ranking Member of the Senate Energy and Water Appropriations Subcommittee, pointed out at a hearing recently that nuclear weapons funding enjoys "unrestrained growth." Indeed, at an expected $27 billion in FY 2017, funding for U.S. nuclear weapons sustainment and upgrades dwarfs global nuclear security spending. Moreover, these nuclear weapons costs are only projected to rise over the next decade. During her opening statement, Senator Feinstein aptly asked, "Where does it end? How much is enough?"

Make no mistake, the Islamic State, al Qaeda, criminal organizations, and rogue operators are trying to get their hands on nuclear material, according to open source reporting. For instance, smugglers have been caught with nuclear material in Bulgaria, Paris, and Moldova in 1999, 2001, and 2011, respectively, all from the same Soviet-era cache according to the Center for Public Integrity. Adding to the gravity of the problem, Russian officials have refused to acknowledge that nuclear materials are missing. Even a grapefruit-sized amount of weapons-grade material used in a bomb could kill hundreds of thousands of people and cause global panic.

The $1 trillion nuclear weapons program takes away from addressing real threats to society, like terrorism - conventional or nuclear - advanced cyber weaponry, and faltering domestic needs while only increasing tensions with Russia and China. Those countries may be spending their own resources on maintaining and bolstering nuclear weapons capabilities - though not comparable to U.S. spending; however, such activity does not justify the U.S. program. In fact, a Department of Defense report on Russian nuclear forces concluded that Russia "would not be able to achieve a militarily significant advantage by any plausible expansion of its strategic nuclear forces, even in a cheating or breakout scenario..." For its part, China reportedly has hundreds of weapons, not the thousands still held by the United States.

Non-proliferation and global nuclear security funding generally enjoy bipartisan support on Capitol Hill. Yet, without a strong advocate from the executive branch and with topline budget pressures from existing budget caps, it will be difficult for even the most committed lawmakers to increase funding. Nonetheless, as the fiscal year 2017 budget process advances, concerns about nuclear terrorism ought to outweigh only half-baked plans and rationale for nuclear weapons spending. Across government, budget prioritization looms as one of the biggest challenges to moving our country in the right direction; the nuclear weapons vs. nuclear security tradeoff should be an easy one to get right.