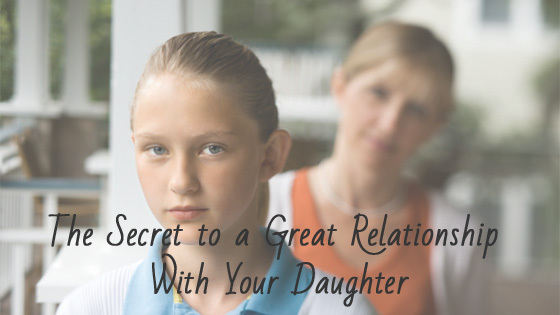 Empower her to go confidently out into the world, while making living with her easier.

You might not remember this, but being a teen sucks. Yeah, you provide a roof over your daughter's head and food on the table, but she's a walking, talking hormonal sharknado who doesn't have a say in most of what happens to her. She's herded from one responsibility to another without much say about the hows or whys of everything.

It's confusing and it's frustrating.

So, she acts out. She always has on earbuds and is looking at her phone 24/7. She rolls her eyes at you constantly, and for just a minute, you want to strangle her. But you grit your teeth and hold back.

There has to be a better way!!

Don't worry. There is. This can be implemented in your family immediately (but depending on on your current relationship, your teen might be wary and take some time to trust you). Either way, this is the number one way to foster a positive relationship with your teen while getting you (and her) what you both want.

Be Honest and Ask, Don't Tell.

WAIT!!!! Don't roll your eyes and click off the page. Let me explain.

We all know that kids don't respond to yelling, except to shut down and stop listening. But the problem is, they don't pay attention when you tell them what to do, either. Even though you're being perfectly reasonable and calm, she's hearing criticism and judgment and doesn't want to deal with it. She feels like all people ever do is tell her what's wrong with her (even if you say 9 nice things with one criticism, she only hears the criticism).

So, how do you get her to do what you want her to do? Here goes:

First, you have to look at the situation from her point of view. Let's say she's eating too much junk food, and you're worried she's going to be overweight or get diabetes (note: this is assuming she's not already at the point of a health risk, in which case you will need to consult a doctor). She's quite possibly struggling in other areas, and the sweets are comforting to her during a time where everything is changing. Lots of people (not just kids) eat out of emotional turmoil rather than hunger.

The next time she grabs a dessert instead of a healthy snack or a soda instead of water or milk, ask to talk to her for a minute. Say you noticed she's been eating a lot of sweets and ask if there's anything wrong. You might get the run around, but be patient. Don't tell her those foods are bad for her and will make her fat or unhealthy, she already knows that. Even if she says she doesn't care, she does. She's being a little bit self destructive for a reason.

Instead talk to her about your experience. Did you do the same thing and struggle with weight your entire life? She might be feeling she's destined to hate her body, so why try. Were you naturally thin and she has a different body type? She might be thinking no matter what she does she'll never be as pretty as you? It could be a million different reasons, but let her know how you feel, your experiences, and keep asking her to share her feelings. Eventually she'll open up and you can work on the issue together.

Another thing to try is giving her choices. Let her know she's limited to one soda a day. She can have it whenever she wants, it's up to her. Or she's limited to two sweets a day -- for example, a donut in the morning and ice cream at night, cookies for lunch and a brownie for after school snack. Again, she gets to make the choice, you're just setting up reasonable boundaries.

And again, remember honesty. If you have hated your body for your whole life, let her know. Tell her you wish you didn't feel that way and fat or thin she should love and respect her body. Let her know you're trying to love your body the way it is, but it's been a life long struggle and you don't want her to have to go through what you did. She's beautiful now and she doesn't need to change a bit. You love her and you hope she can see how beautiful and lovable she is.

She has watched you her entire life, so if you say one thing to her, but act differently toward yourself, she's thinking you're a hypocrite and she ignores you. By being honest and open with her, you are showing her how to process her feelings like an adult and teaching her to make the best choices for herself. Don't hold her to impossible standards and do encourage her with each success.

Rome wasn't build in a day. If you have been fighting a lot with your daughter, it can take some time for her to open up to the idea of you bonding with her on her level. The secret is be consistent. Listen. And before you raise your voice or scoff at her concerns, pause and remember she has her own totally unique point of view.

Please, share your triumphs and tribulations in the comments section below.

More:
communicationteen girlsParentsteenagersbody love
Newsletter Sign Up
Raise the kind of person you'd like to know
Subscribe to our parenting newsletter.
Successfully Subscribed!
Realness delivered to your inbox