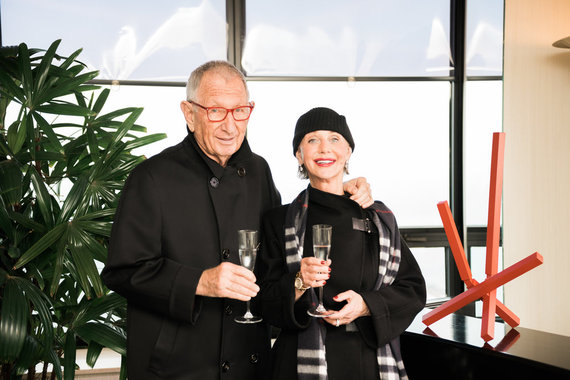 Today is my 26th wedding anniversary. I am smiling!

This is my second marriage due to the death of my late husband, Michael, the father of my children. I have been married longer to Sheldon Good than I was married to Michael Forman.

I am sitting near my burning fireplace in my home in California. It is raining outside. I hear the pitter-patter of raindrops on my roof. Most couples, celebrating their anniversary, would feel deprived wishing for a sunny day on their special day. I do not. I am very content and happy. Why? Because as my husband, my ultimate concierge, always tells me, "Rain or shine, every day is our anniversary."

I am smiling because, even through the rough patches of the last 26 years, there has been one constant in my life, my husband, Sheldon Good. I hope he feels that way about me, too.

We have lived and experienced, together, a magnanimous fairy tale life. We met. It was attraction at first sight. He told me he had been waiting for me for over five years since losing his late wife. He called me his Hawaiian princess. I felt like a Queen!

We were married ten months later. And truly for ten years, except for a few blips, our life was better than the most romantic and interesting novel. We melded as one. Our values were the same. Our taste in everything was identical. We learned from one another. We shared our most intimate feelings and over the past 26 years I have given him the title of 'ultimate concierge and best girlfriend.'

It must seem that all of our planets were aligned. And they were. But like all of you, dear readers, life started dealing us outside blows. Life shattering blows. Blows that many members of my family and many of my friends have, thank God, never experienced.

These unexpected and frightening incidents ranged from serious illness, issues with blended family members, concerns with our children, suicide, betrayal from family members and beyond. Enough to change the personality of a spouse and make the magic of any marriage disappear. And, that was the time in our marriage, dear readers, that we were able to weather life's events as a team, a unit, and tackle our hardships as one collective force.

Were Shelly and I tethered to one another by some magical force? That is 'fairyland' thinking.

I grew up with parents who were committed to their marriage. I noticed over the years my parents' ability to be great allies. You know the expression, 'monkey see...monkey do.' That was my lucky exposure to the art of a successful marriage.

Shelly grew up with two working parents. His mother asked him to take watch over and care for his younger sister. He committed himself to a relationship, taking her everywhere with him. He learned how to establish a lifelong and loving relationship with a sibling.

Some of you are beset with problems. Maybe alcohol addiction, monetary problems, 'he says potato and you say potato,' whatever, dear readers.

I once overheard a doctor tell a patient on television: "The worst marriage is better than the best divorce." He went on stressing the additional grief with the children, finances, dividing up property, new marriages, dealing with blended families and the in-laws and out-laws (so to speak.) When he was done talking, I was exhausted from listening and I thought to myself, "Maybe he is right!"

Maybe you dear readers, who are in a stressful marriage, should try my solution? Remember this...

My 26 years with Sheldon Good is a love story with perfect timing. I do believe the stars were aligned.

As my ultimate concierge always tells me, "The best is yet to come." Dear readers of mine that would be the best anniversary gift. I am smiling yet again.