Whether you've been a mom for eight days or 18 years, I bet you've done this. You've fallen into this subtle trap. Maybe even today. The truth is I did it this morning.

This mistake is dangerous. It will make your children miserable. It will frustrate your husband. And, if you don't fight it: It. Will. Kill. You.

It all began when I was pregnant. I compared my weight gain to that of every other with-child woman I knew, saw on TV, read about in People or heard someone else talk about. Sure, I understood that it was healthy to gain. But deep down I wanted to know were I placed in my own, imaginary contest where the skinniest pregnant woman wins.

I compared others' custom nursery themes to my nursery-in-a-bag set from the Target clearance rack. I compared my Graco to the high end strollers they bought. I labored over which birthing classes to take based on their choices. Don't get me started on how I bemoaned the cuteness of their maternity wardrobes to mine.

Then my bundle of baby arrived. Soon, keeping up in the game became even more complicated. I no longer had any control over my standings. Through some strange metamorphic process, I turned into a sponge that absorbed every juicy drop of hearsay data on how other babies were progressing. Her daughter is already smiling. Her son is rolling over. Cade is sleeping through the night at four weeks and Bree is the world's first crawling newborn!

We had some work to do.

I became consumed with where my little guy fit into the mix. Yet, he hadn't smiled. He seemed completely disinterested in rolling over on time. And, sleeping... Yeah, that wasn't happening. Didn't he know we were in a race?

Then panic set it.

Uh oh. Was he going to be slow? Was there a problem? Was I doing something wrong? Or worse: Was I just a bad mom (Already!)?

Exhausted, little did I know that the comparison Olympics had only just begun. Seemingly innocent milestone questions like, "Where is he on the growth charts?" or "When did he start walking?" matured into "How many words does he have?" Meanwhile, keeping up with the latest fashions from Baby Gap while teaching my 1-year-old to pronounce the word "tooth" before his first appeared took it's toll on this new mom. 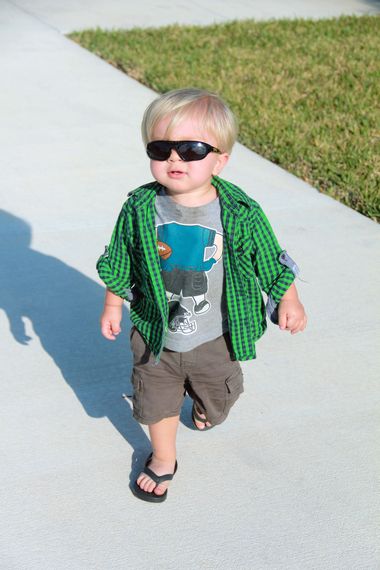 I thought maybe the comparisons would slow down. But, I was wrong. The preschool years arrived and now there were even more *important* comparisons to be made -- like how long it took to get little Sam to say adios to diapers. Competitive potty-training, alphabet singing and letter scribbling became the markers used to separate a good mother from a deficient one.

A little part of me died with every secret comparison. All around me I heard women juxtapose their children's vocabulary, hair, height, weight, manners, how they sleep, where they sleep, what they eat and when they eat. They contrasted birthday parties, sports involvement, amounts of screen time and even the quality of their preschool's curriculum on their mommy blogs. Why didn't they just come, stand outside my home and chant a chorus of "Anything your 3-year-old can do mine can do better?"

Fortunately, once a child enters formal schooling, you no longer have to grapple with arbitrary measurements. Schools are kind enough to offer report cards and standardized testing so you can check the chart to find your mini-me's dot on the bell curve. For extra comparison opportunities, have your child's athletic prowess or musical talent assessed. Just sign them up for plenty of extra curricular activities. Don't worry about how fun it is for them, just be sure they get on **good** teams and are part of the **best** programs.

If all the kiddo comparison isn't enough to drive you bonkers, you can play the other mommy comparison game. She runs marathons with her jog stroller (you clocked 26.2 in the minivan yesterday). She cooks fresh organic meals (you just popped in a frozen lasagna). Her door has a Pinterest-worthy homemade wreath, yours just has cobwebs (not the Halloween decorative kind either). I could go on...

Hey Moms: Let's stop the insanity! Comparison is killing us.

Can we get real and recognize that most of the comparison stress we feel isn't really about our children at all? It's about us.

Our children are not little measuring sticks of our mommying success. They are people.

We swell with pride when junior does something awesome (as if the credit is ours) and we shrink with shame when he does something, well, not so awesome (we are to blame). In most cases, neither the feat nor the fault is truly our doing.

So, let's take the pressure off! We don't have to be perfect moms. There's no such thing. And, ironically, even if there was, I don't think we'd like being her as much as we think we would. No one actually likes a perfect woman, anyway.

Maybe we need to allow our children the freedom to not be perfect either. Because they won't be. They'll make mistakes. They'll amaze you with their aptitude in one area while astounding you with their thick-headedness in another. And, they need the chance to both fail and succeed.

And, yes, though we do have a lot of influence on how our children turn out, we don't have a lot of control over their uniqueness and abilities. No matter what our preferences, we can't nurture, support and shape them into something outside of who they weren't created to be. God put them here with a purpose. Sometimes our children will look different, be different, and act different than those around them. And, as a mom, sometimes we'll do things a little different too. And, that's alright.

A version of this post originally appeared on DallasMomsBlog.org.