What couples fight about behind closed doors -- and how to address it.
By Casey Lewis, SELF 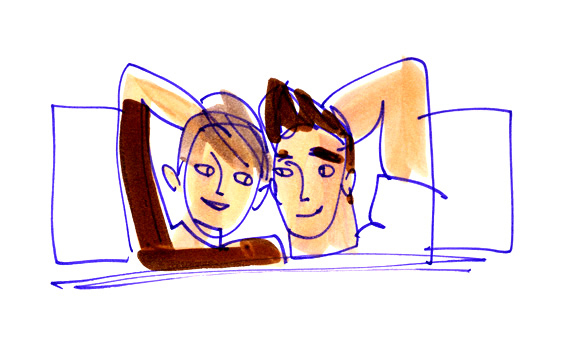 Studies have shown that sex and money are two of the leading causes for divorce, but statistics don't always tell the whole story. We reached out to a handful of top relationship therapists to find out the #1 problem they come across in couples. And believe it or not, neither sex nor money came up once.

Of course, relationships are complex and complicated, and no two marriages are the same. But each expert immediately rattled off a super common -- and often extremely reparable -- issue they see arise again and again and again.

Whether you're a year into matrimonial bliss or celebrating a decade of wedlock, you'll benefit big time from this romance wisdom. In fact, you don't even have to be hitched to learn a thing or two about love.

You're Bad at Communicating
"The number one problem -- though I prefer the word challenge -- in marriage is indeed effective communication," said psychotherapist Laura Young. "This includes how to argue with your spouse and not threaten to leave the relationship during a fight, as well as how to recognize -- perhaps remember -- that the annoying behaviors you feel are now intolerable have probably always been there. Perhaps you even felt they were adorable at one point."

Although communicating better is the kind of thing you can learn, knowing how to do it in a more effective way is even easier if it's done from the start of the relationship. "In the past few months, I've seen a significant increase in folks seeking 'pre-marital' therapy, which is so encouraging," said Young. "At the beginning, both partners are more willing to discuss their differences and openly explore how they can increase their awareness as well as acceptance that they balance each other out. Married couples who have gotten hardwired in their dance of hurtfulness can, sadly, become so myopic that they would rather be right than happy."

You're Not Having Enough Fun Together
When you've been with someone for so long, the definition of date night inevitably loses its meaning. After all, the two of you Seamless and Netflix and pound away on your laptops side-by-side almost every night. Surely that counts? Spoiler alert: Sorry, it doesn't.

"Couples spend too much time on the 'business' of being a married couple and not enough time staying connected, having fun together," said therapist Lauren Urban-Colacicco. "In order for a relationship to continue to be successful, it's necessary to foster the romantic and emotional connection between partners. Dates are extremely important, as trite as it sounds."

You're Too Busy
"Couples time-starve their relationships," said psychotherapist and marriage counselor Jean Fitzpatrick. "After the initial intense experience of being in love, they don't recognize that their marriage needs nurturing. They let it run on autopilot and eventually start bickering a lot, or get bored with each other, or intimacy disappears, or someone has an affair."

It's crucial to make time for your marriage just like you make time for, say, exercise. Think of it as an investment for your health -- because honestly, it is. "There's nothing intrinsically bad about work or children or socializing or devices, but couples need to put their relationship on their calendar. They need daily rituals of connection and regular, meaningful and fun couple times."

You're Insensitive -- Or Too Sensitive
Feelings get hurt. It happens! But if it's not handled well, the resentment and anger manifests, and suddenly, you realize you've been giving each other the silent treatment for three days.

"What comes up a lot is someone misunderstanding the other person's motive," said marriage and sex therapist Dr. Jane Greer. "One person will say something or do something that in no way is intended to be antagonistic or hostile, and yet, whatever's said or done is interpreted as thoughtless or hurtful. When the other person reacts in anger, the person who said or did it is immediately confounded and bewildered, and launches into an explanation -- which only digs them into a deeper hole."

Whether or not you feel like you did anything wrong, Greer says it's important to express empathy for your partner's bruised feelings. "If your partner is upset by something, your default reply has to be, 'I'm sorry that's how you feel,'" says Greer. "If they feel like they didn't do anything wrong, 99 out of 100 people feel no reason to apologize." And as for the wounded, it's important to pause for a breather before taking everything personally. Says Greer: "I teach people to say, 'Look I'm really upset by what you said or did. Whether you meant it to be this way or not, here's how I experienced it.'"

You're Codependent
Turns out there's a lot of truth to the whole loving-yourself-before-you-love-someone-else idea. Rushing into a relationship before you have a good handle on who you are -- or who you want to be -- never ends well.

"Some people are in relationships to help fill a void, or fix what they're lacking or what they feel insecure about," said Dr. Daniel Selling, psychologist and director of Williamsburg Therapy Group. "A lot of it comes down to accepting who our partners are, rather than trying to bend them to who we want them to be. A lot of people enter into relationships because there's attraction, there's chemistry, there's a lot that they like -- but there's also a lot of fantasy that they will become who they want them to be. Couples that really thrive accept the good and the bad of each other."

If you feel like these therapists are looking straight inside your relationship (creepy, right?), start the conversation with your partner. Identifying and agreeing on the issues is the first step to building that bulletproof marriage.