Whether you're a beginning or experienced yoga student, chances are that you've faced off with your hamstrings in one way or another.

"Tight hamstrings tend to flatten the lower back, causing people to lose the normal curve of the lumbar spine," says Julie Gudmestad, a physical therapist, Iyengar yoga teacher and founder of Gudmestad Yoga. "That's a big contributor to lower back pain and lower back injuries."

There are many other good reasons to make sure your body in general -- and your hamstrings in particular -- remain flexible. Staying flexible is critical to keep aches and pains at bay as you get older. When you lose flexibility, you lose range of motion. That doesn't just translate into achy joints and muscles; it slowly makes you lose the ability to do the daily movements you take for granted.

Further, a recent study in the American Journal of Physiology suggests that lack of flexibility might even be linked to a known marker for cardiovascular disease and the risk for heart attack and stroke: arterial stiffness. Improving flexibility with stretching, yoga, or Pilates, the study authors suggest, "may be capable of modifying age-related arterial stiffening in middle-aged and older adults," and should be integrated as part of a complete exercise routine.

Health benefits aside, for yoga practitioners, making friends with your hamstrings is paramount to developing a rewarding practice. If you practice yoga, tight hamstrings make it challenging to reach correct alignment in many, many yoga postures. Without correct alignment, not only is your practice less rewarding, the risk of injury is greater.

"When the hamstrings are tight, it tends to lock the pelvis, so it doesn't move as freely," says Gudmestad. "As a result, many yoga practitioners end up overworking their low back."

The hamstrings are a group of three muscles on the back of the thigh: Two of them (the semitendinosus and the semimembranosus) run from the pelvis along the inner thigh to the knee, and one (the biceps femoris) runs along the outer leg to the knee. If you place your hands behind your knee, you can feel the hamstring attachments as firm, bone-like tendons -- one on the outside and two on the inside of the knee. On the other end, the hamstrings also attach to the ischial tuberosity (sitting bones) of the pelvis.

Tight hamstrings limit the movement of the pelvis in relation to the legs -- think of it as a tight, unyielding elastic band running between your pelvis and knees. This does not just affect alignment in the obvious yoga poses, like seated or standing forward bends. It also impacts standing poses like Triangle pose (Trikonasana), Reverse Triangle (Parivritta Trikonasana), and the ubiquitous Downward Dog (Adho Mukha Svanasana). People with very tight hamstrings also struggle to sit with proper alignment in simple seated poses on the floor like Staff pose (Dandasana), because the hamstrings pull the pelvis into a backward tilt, rounding and putting strain on the lower back.

Tight hamstrings are extremely common in beginning yoga students, particularly men and those over 40. But even among younger, infrequent yoga practitioners, tight hamstrings are surprisingly widespread. If you look around your yoga class when doing standing forward bends, you can spot the folks hampered by hamstrings in a second--they are the ones with excessively rounded backs and/or bent knees.

Overly Flexible Hamstrings Can Be a Problem Too
Even for experienced yoga students, the hamstrings often present a challenge, albeit for a very different reason.

"While tight hamstrings are common among beginning yoga students, many advanced yoga students have the opposite problem," says Doug Keller, author of Yoga as Therapy, who frequently offers yoga workshops targeting hamstring issues. "Long-term yoga practitioners who are very flexible in their hamstrings often stretch in ways that cause injury, especially where the hamstrings attach to the sitting bones."

Flexible yoga students tend to particularly overstretch the hamstrings on the inner leg, Keller says. This can eventually cause tears at the hamstring tendons at the inner knee or at the sitting bones, resulting in mild or sometimes more severe injury, an increasingly common problem.

"If you take a survey of yoga practitioners, you will see that quite a few of them have a slight pain at the sitting bones at the attachment of the hamstrings," Keller notes. "Others have pain at the inner knee, which also indicates damage to the hamstring tendons."

Injuries to tendons and ligaments can last a long time if they are not treated properly. Even fit people or those who are very flexible can sometimes suffer lasting injury in the hamstrings because of the way they stretch.

In his workshops, Keller teaches advanced yoga practitioners the actions to perform to ensure they get a safe hamstring stretch in yoga poses.

A Simple Hamstring Test
Do you have tight or flexible hamstrings? Here is an easy way to find out. Lie on you back with your legs stretched out, arms by your side.

Raise your right leg towards the ceiling keeping your foot gently flexed. 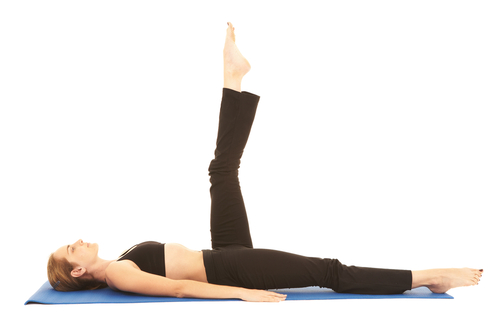 However, if your raised leg forms less than a 90-degree angle to the floor, e.g. at an angle more like 60 degrees, 45 degrees or even 30 degrees in relation to the floor, you have tight hamstrings.

If that's you, try bending your left knee and put the left foot on the floor, and then again reach the right leg towards the ceiling. You will see that the right leg now is able to reach further up towards the ceiling. The reason is that your pelvic bowl now is tilted slightly back, shortening the distance between the hamstring attachments, and giving you a bit more slack. Try the other side also, as many people are more flexible on one side than the other.

Recipe for Happy Hamstrings
Why should you bother keeping your hamstrings flexible? Let me count the ways. The hamstrings contain a lot of connective tissue, and as we get older, they tend to get tough and less flexible faster than other muscles in the body. When this happens, says Keller, it affects the whole body.

"When speaking about the hamstrings, we're talking as if we're just stretching one muscle group, but the body doesn't function according to just one muscle or muscle group," says Keller. "The whole body is influenced by whatever happens in one part of the body. So, stretching the hamstrings is not just for the benefit of your legs, it's really for the benefit of your whole body."

There are two ways yoga students commonly deal with hamstring issues. Beginning students will tend to round their back to compensate for the tight hamstrings. Rounding the back brings the head closer to the knees, which gives the illusion of going deeper into the pose. In actuality, however, it just transfers the stretch to the back instead of the hamstrings, increasing the risk of muscle tightness or even injury to the back. Plus, it's uncomfortable. If you hate stretching in yoga, this is likely to be part of the problem.

The other way to deal with tight hamstrings is what many yoga teachers advise--use a block, or bend slightly at the knees. However, for people with very tight hamstrings a block is usually not enough. And while bending the knees helps take the stretch out of the back, it has other drawbacks.

"When you bend the knees in standing forward bends, the knee ends up in an unstable, unprotected position," says Gudmestad. "It may help the back get in a better position, but it can be risky for the knees."

Just as bad, Gudmestad notes, when bending the knees in a standing forward bend, the hamstrings are actually contracting, not stretching.

"It allows people to do a variation of the pose," says Gudmestad. "But it won't add up to more flexible hamstrings."

In short, when it comes to dealing with tight hamstrings in yoga, there are few shortcuts. Start with yoga poses like Supta Padangusthasana or Extended Hand to Foot Pose (Utthita Hasta Padangusthasana, modified to be safe for the back, while gently challenging the hamstrings. Also be sure to stretch the inner thighs with poses like Supine Bound Angle Pose (Supta Baddha Konasana), as tight inner thigh muscles often accompany tight hamstrings.

The key to safe hamstring stretching in these poses is to never push, and to hold the poses for a ideally two to three minutes to give enough time for the tough connective tissue in the hamstrings to begin to open up. If you practice in the morning, be sure to warm up first.

It may take you a couple of months of 10-15 minutes of daily stretching to make friends with your hamstrings or longer, depending on your age and other fitness activities. And of course, if you have health issues, particularly back problems, always check with your doctor first.

In the process of befriending your hamstrings, however, you are likely to find surprising benefits -- apart from greater ease in your yoga practice. Many people hold stress and tension in the deep muscles of the legs, and stretching them can be a great way to release that stress. If you do the stretches before bedtime, you may find that you sleep better. And over time, you will notice other changes--for example, that nagging low back pain that has been bothering you for a while may just slowly fade away.

As all aspects of a yoga practice, opening your hamstrings is a journey and exploration with its own surprises and blessings.