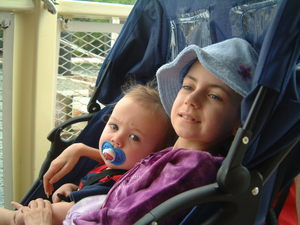 Alex Scott, with her brother, Joey.

During my daughter Alex's treatment for neuroblastoma, we had so many wonderful experiences with nurses that helped her, as well as our family, cope throughout the treatments. In honor of National Nurses Week, I want to shed light on the critical care provided by hospice and palliative nurses.

Two days before Alex passed away, the cancer had taken over her body and she became nonresponsive to almost everything. The team at the children's hospital - where she could be found at least 2 days a week for check-ups and blood transfusions - suggested we meet with a hospice nurse the next day at our home. My wife Liz and I had little interest in meeting with this hospice nurse, but we reluctantly made the appointment. In our minds, what could this nurse tell us? We had been taking care of Alex during her 7 ½ year battle with cancer.

The next day, a Saturday, Gail the hospice nurse came to our house. A huge package of medications had been delivered that morning. Together we went over each of the medications one by one. Alex was dying and the medications were to help us manage various symptoms associated with a cancer death. This included things like the obvious pain medications, but also various patches and medications to help with nausea and dizziness. Once Gail was comfortable that we were up to speed she got ready to leave and asked what time she should come the next day. We told her that she didn't need to come back. She told us that she would see us the next morning. We assured her that she didn't need to bother, we were all set.

It was a difficult Saturday night. Alex was sick to her stomach off and on. She was extremely restless as the three of us tried to get through the night. I remember there were horrible thunder storms that night. So bad in fact that water came in through the roof in Alex's room - something that had never happened before. At one point Liz and I sat up startled during the storm because of loud thunder and extremely bright lightning. At that very moment Alex sat up as well, looked at us and said, "What are you guys doing in my room?" That was the first coherent thing she said all day and the last thing she said to us with her eyes open. It was a very long night.

The next morning we moved Alex downstairs to the couch, one of her favorite spots. Later we heard a knock on the door. That darn hospice nurse was back! Gail first asked how Alex was doing. We told her that her breathing was labored and shallow all night.

At some point Gail asked us to come into the kitchen. She was then brutally honest with us. Brutally honest, but in a loving and caring way. She said, "We all know that Alex is dying. You told me that you told her it was ok and that she would be ok." She went on to give us a lecture, a lecture that we will never forget.

"When was the last time you ate anything?" she asked. "Alex can tell what is going on even if her eyes are closed. If she thinks that you guys cannot take care of yourselves, then she is not going to let go. You both need to go upstairs and take showers and change your clothes. Then come down and eat breakfast. Then, Alex will know that you will be okay without her."

Liz and I did as she said. Of course we did it one at a time because we needed one of us by Alex's side. We whispered to her that we had eaten and taken showers (I am guessing she could tell we had showered because we smelled better). A calmness came over Alex and she let out a big sigh of relief. Shortly after that she drifted off to her final sleep.

At the time the nurse was telling us what to do, we may have resented her a bit. But it didn't take long for us to appreciate what Gail did for us and Alex. Our gratitude is endless for Nurse Gail for being so right and changing our lives.

Thank you to nurses everywhere for your dedication and the critical and valuable role you play in supporting families going through difficult times.