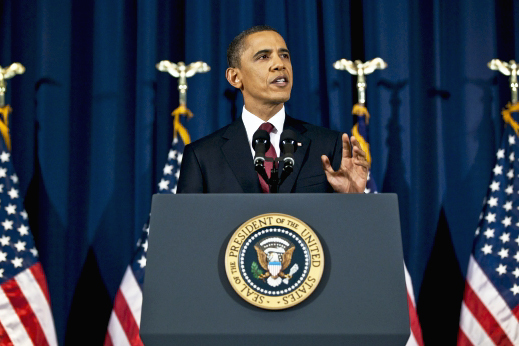 President Obama delivers an address at the National Defense University in Washington, D.C.

In high school, like many Americans, I excelled in humanities subjects like English and History but found Math and Science much more difficult.

I suspect President Obama was generally one of those humanities people, too. In the same vein, he has been a president with relative strengths and weaknesses -- strong on domestic social and economic issues but lackluster in the foreign policy department.

After eight years of no scandal or major screw ups ("No drama Obama" was a campaign mantra), he passes the torch soon to his antithesis -- the 24/7 Drama Queen who is likely to undo much of Obama's legacy.

Nonetheless, herewith is the final report card of POTUS Barack Obama, a good man who indisputably restored intelligence and integrity to the White House.

Let's rewind the tape to September 2008, just two months before Obama was elected: the U.S. economy was on the precipice of an epic meltdown.

Obama stepped into a tornado and calmly and confidently brought order to the chaos. Through bailouts, stimulus spending and a rescue of the failing auto industry, Obama set the economy back on the right course. Since then, a steadily improving job market with little inflation and low gas prices has allowed the U.S. to be the only developed economy to buffet the tempestuous global headwinds.

Social Progress and Civil Rights -- A-

Once again, the stellar student turned in an incredibly impressive performance. He was a little late to the party on gay marriage, but thanks to his VP buddy Joe Biden, the president finally did the right thing. He pursued progressive policies on family leave, overtime rules, the minimum wage and other socially responsible items and was largely successful. His signature social policy, which has been dubbed "Obamacare," was a good idea that wasn't executed flawlessly and is now exposed to GOP repeal.

This was the president's toughest subject and his record is mixed, at best. On the positive side of the ledger, he did not plunge our country into reckless adventures overseas like his witless predecessor, and he largely wound down the interminable wars in Afghanistan and Iraq. And he impressively took down Osama bin Laden.

During his tenure, Russia once again became ascendant and is now punching way above its weight class. Obama did little to check Putin's rise and his last-minute sanctions are a case of way too little, way too late.

The President took a firm position with Iran, perhaps the most evil country on the planet, and snatched defeat from the jaws of victory. In his zeal to negotiate a treaty before his tenure ended, Obama prematurely lifted economic sanctions that had just begun to cripple Iran and allowed them to use that money to sow more chaos in Syria.

Like so many presidents before him, the Middle East proved bedeviling to Obama, and in his final days he took a bold step and attempted to apply pressure on Israel to stop allowing new settlements in the West Bank. This was another misguided last ditch effort that reeked of desperation.

One wishes the president would have shown as much foreign policy backbone in his whole tenure that he tried to show in his last month in office.

The president leaves behind a decimated Democratic Party and as the leader of the donkeys for eight years, all blame stops at his doorstep. Entrusting his legacy to a flawed candidate like Hillary Clinton was a huge mistake in hindsight. Letting Rahm Emanuel go to Chicago to ruin his political career, proved calamitous on other fronts: since Rahm left Congress the Dems have been on a precipitous decline in winning legislative seats. And don't look now, but less than one third of the country's state houses are led by Democrats. A political bloodbath of epic proportions.

In conclusion, President Obama's Report Card, while a mixed one, does not give POTUS and his family their due in improving America's standing both domestically and internationally -- after eight years of civility and ethical behavior, we are going to miss their class and dignity.

Buckle your seat belts, here comes the incoming class of freshman and a new leader who will surely need to be graded very frequently.