Before we jump into their financial statements, let's first take a moment to understand the insurance business. Insurance is a bet you make with a large company that something bad will happen to you. It's a strange bet, because both you and the company hope you'll lose. Just to make sure you'll lose, insurance companies hire high-priced financial talent to guarantee their odds of winning; they know exactly how to rig the game.

So imagine my surprise when I started analyzing insurance company financial records and found that the big insurance companies have spent years getting out of the commercial health insurance business. This explains why they're rejecting Obamacare: it turns out the last thing they really wanted was millions of new commercial customers to insure. 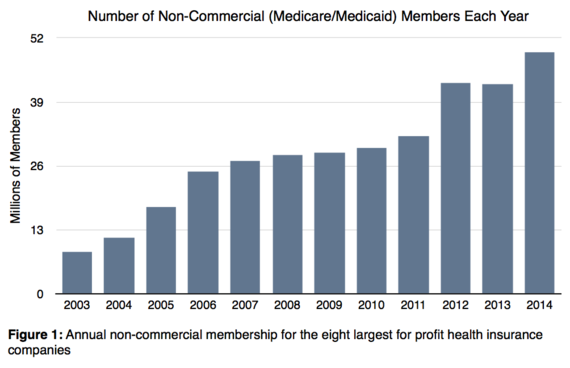 But if you don't qualify for Medicare or Medicaid, insurance companies are a lot less interested in you. Commercial membership for these companies are up only about 13 percent since 2005, and with those policies, they've found a way to make someone else write the checks. Most commercial policies that insurance companies now manage are Administrative Service Contracts (ASCs) which aren't even actual insurance. 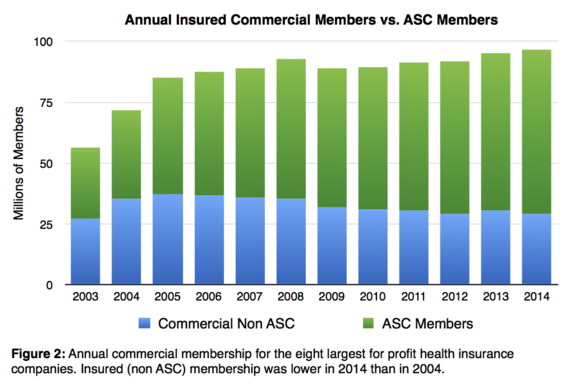 Here's how ASCs work: employers hire health insurance companies to manage medical expenses for their employees. The insurer gives these employees access to their networks of doctors and hospitals, and it processes claims, issues denials and negotiates medical bills. But the employer, not the insurer, writes the checks to cover the bills. This hasn't reduced the confusion or bureaucracy in healthcare, but it's a radical shift in financial responsibility. Employers are buying ASCs because ASC fees seem cheaper than the cost of insurance premiums.

But unlike other types of insurance, health insurance companies are walking away from these advantages. Instead, they're encouraging employers to "self-insure" through ASCs. So let's take a look at some of the problems this can cause.

In May of 2012, the LA Times told the story of a woman who found out she could have arranged a CT scan at a hospital for $1054 if she paid cash for it. She found this out after her insurer (Blue Shield) "negotiated" a price at the same hospital for the exact same CT scan of $2336.

One of my patients got a bill for nearly $135,000 covering a hospitalization at UCSF last February. Thanks to an ASC, her husband's employer paid about a third of that (over $45,000). But UCSF's financial records show that they normally get only about 27 percent on their bills, so $37,000 might have been enough.

With ASCs, insurance companies aren't motivated to get the best deal on the price of a medical service because it's not their money. They still knock a lot off the sticker price but, in health care, it's hard to know a good deal because hospital markups are insanely high.

Take my own case. My wife's ASC (through Blue Shield) was billed $4,716 for my colonoscopy. Blue Shield knocked it down to only $2,750 -- Which is over 4 times what Medicare pays for the same procedure. And my wife's employer is a hospital (UCSF). Why would a hospital allow such a terrible deal for a medical procedure? Probably because the employee benefits manager at USCF doesn't consult with the hospital's billing manager. So even a hospital can get taken by this system because, like many large businesses, they often write checks without taking the time to ask enough questions.

How does this affect you? If you're an employee, expect your employer-sponsored premiums to keep going up because the insurance company that runs your employer's ASC has no motive to negotiate good prices for your health care. Employers don't realize this, because they're not experts in health care costs. That pretty much guarantees rising health costs.

So insurance companies have actually found a way to write themselves out of the risk they're supposed to be managing and we're all paying the price.