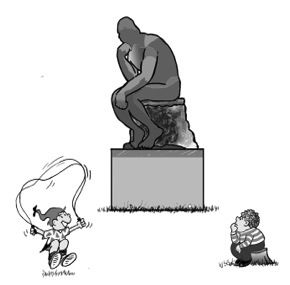 When I mention the term "observing self" or "observing ego" most people look at me with a quizzical expression as if such talk should stay in my office. But the "observing self" has broad application in and outside the psychotherapist's terrain because it can create an awareness of self and a sense of place in the world.

The observing ego, or the split between our experience and our observation of it,
Allows us to perceive and change. By contrast, without the observing self, we experience ourselves as "acted upon," or lacking control, and In the extreme, as a victim, similar to a caged animal. In short, developing an "observing self" early on and with great effort helps to impart agency. "Agency is not automatic," he New York Times journalist David Brooks writes. "It has to be given birth to with pushing and effort. It's not just the confidence and drive to act. It's having engraved inner criteria to guide action. The agency moment can happen at any age, or never."

Early in our evolution, we humans perceived that we were at the mercy of the Gods. We believed that powers operated on us. We lacked a sense of agency and probably didn't believe we could overcome fate. The course of development has shown that we possess the potential to change, but doing so requires the observing self.

An aspect of psychological treatment is to nurture the delicate seedling of the observing self, this sometimes mysterious entity that some of us possess at an early age and that some don't acquire in spite of extensive psychotherapy.

For example, Mr. O. suffered severe abuse as a child. During his years of psychotherapy, he was able to develop a keen observing self/ego that alleviated his paranoia, freeing him from his psychological cage to grant him a wide panorama of his world of relationships.

By contrast, Ms. Q. did not develop an observing self. An aspect of the observing self is the ability to see ourselves in all dimensions -- our positive as well as our negative attributes. Ms. Q. continued to insist that her son was "the bad one," the source of the problem, and to view herself in a positive light. She paced back and forth, like a caged animal, unable to help herself or her offspring.

Parents can play a critical part in fostering a sense of agency during a child's development. Preventive pediatrics is now recognized as vital to a child's health and to a nation's financial well-being. Preventive psychiatry -- education for each and every parent -- would be a great evolutionary step. We have the psychological knowledge but lack the awareness and the legal structure to institute the discipline.

The ground-work (of knowledge) has been laid in the textbooks of child development, but the recognition and implementation of this knowledge may not happen for centuries. The same phenomenon -- of "agency" and observation applies to each one of us as well as to our entire species.

Conclusion: It is the observing self that grants us a sense of "agency" with the capacity to change ourselves and our world.