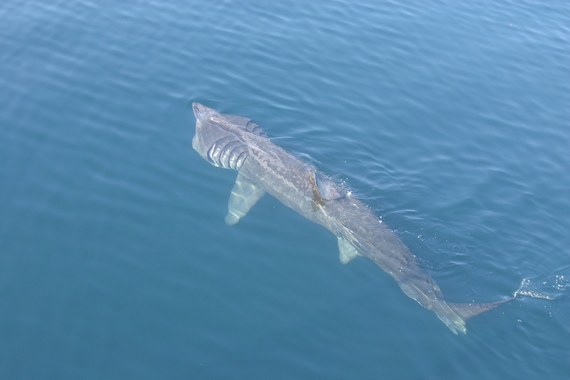 There are mysteries in nature that are better left unsolved. The enigmas we are incapable of decoding could be the Earth's strategy to safeguard those species which are otherwise vulnerable to man's greed and cruelty.

Many are the examples that come to mind. For instance: have you ever heard of the Basking shark? An ocean creature that can grow to be ten meters long. It plows through the waters of the world and, ironically, often goes unnoticed. It disappears during the winter months, but shows up again in the spring. Where do these gentle giants of the ocean go? What do they do? Hypothetical explanations are all we have.

Last week an Italian news website, Ravenna Today, reported the sighting of an eight-meter-long basking shark in the Adriatic Sea, at about six miles off the coast of a city called Cervia.

Basking sharks are one of the biggest fish in the world, second only to whale sharks. Their scientific name is: Cetorhinus maximus. It derives from the Greek words ketos, marine monster, and rhinos, " nose " , because of their long snout. Maximus is a clear reference to the animal's size. Although their dimensions and name might induce us to fear them, basking sharks are harmless to human beings.

The Cetorhinus maximus can be sighted traveling alone or in groups. They swim slowly both in deep and shallow waters with their mouths wide open, to catch as much plankton as possible. They often pay us a visit here in the Mediterranean area. Our temperate seas hold precious food supplies for a great number of marine inhabitants and the gentle giants make no exception. After all who doesn't enjoy a banquet!

But, and it is frustrating to have to add the word " but " on a constant basis, like with too many other living beings on our planet, basking sharks appear on the IUCN's (International Union for Conservation of Nature) red list as an endangered species and are protected under the CITES Appendix II whose website states that although they are not threatened with extinction, " they may become so unless trade is closely controlled. "

WildLifeRisk, a nongovernmental Hong Kong-based wildlife conservation organization issued a report in January 2014 stating that about 600 whale sharks and basking sharks are being processed by a factory in China every year. This is illegal and an inevitable question emerges: how many other factories could be involved in this unlawful trend?

What makes these majestic creatures so appetizing to fisheries around the globe? The fact that a single carcass is worth tens of thousands of dollars. Shark fins are sold to restaurants for shark fin soup. A single bowl can cost over 100 dollars. The skin goes to manufacturers for bags, the oil is bought by companies to make fish oil supplements and the meat becomes food.

In one form or another many people consume shark products and in many cases are led to believe that a shark steak or shark fin soup are healthy.

It's not difficult to debunk such a misconception. All it takes is one word: mercury. All it takes is a simple search on the Internet to find scientific evidence of the toxic levels of mercury found in shark meat. The mercury present in fins, cartilage and shark flesh can be extremely dangerous to us.

Mercury has always been present on Earth, it was produced naturally by wildfires and volcanoes. However 2/3 of the mercury in our atmosphere today is man-made, like coal-burning power plants and waste incinerators. The substance travels in the air for thousands of miles. It is then released into our oceans either directly through rainfall or indirectly through runooff, it enters the marine food chain and eventually becomes products we eat or use.

This is the reason why the consumption of shark products carry labels from important organizations such as the (FDA) U.S. Food and Drug Administration, the (EPA) U.S. Environmental Protection Agency and (WHO), the World Health Organization.

The Web lists a great number of medical studies that indicate how mercury can affect our health. In adults it can cause damage to the central nervous system and cardiovascular system. Many organizations advise pregnant women and children not to consume shark meat at all, because a developing brain is very vulnerable to mercury.

As I watched the video of the basking shark's visit to the Adriatic with my ten-year-old son I kept thinking, nature doesn't need us. Nature has always been here, she has always survived. Human beings on the other hand depend on nature; without her we are doomed. It's that simple.

"Mom, do you think I will ever see a real shark in the ocean?"

I was about to answer: "Of course you will Danny " but I stopped myself. Children need to know the truth, always. "I'm not sure sweetheart, but I will do my part, I will do my best to give you that chance. "