When the news of the California octuplets hit the world, the first reaction was awe. When it came out that this single mother living with her parents already had six children, for many, the second reaction was, well, isn't this a tad bit excessive? 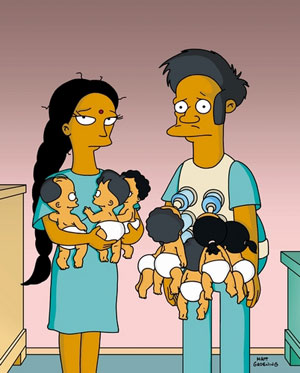 Nobody wants the government defining what a family should and shouldn't be, and this includes family size. But there's fate--and then there are fertility drugs. Should you really be allowed to tap fertility science when you already have a Brady Bunch at home?

So, the statistics: According to Mother Jones, one American child generates as much CO2 as 106 Haitian kids. In the first 2.5 years of their lives, these eight babies will generate a massive pile of 30,400 disposable diapers, if their mother doesn't choose cloth (the best option for landfills), safer disposable diapers or diaper hybrids like gDiapers that produce less waste.

Then there's the carbon footprint over a lifetime: According to Jonathon Porritt, chairman of the British government's Sustainable Development Commission, the average British child will burn carbon roughly equivalent to 2.5 acres of old-growth oak woodland over a lifetime. That means the octuplets will burn at least 20 acres, or just over 15 American football fields (and add a bit more for the higher American average).

And how about food? This is one pricey taxation of resources. By the time they are 18, the octuplets will have consumed nearly $270,000 in food (based on the average for an American child in a middle-income family).

These numbers don't address the other six children. Which brings us back to the question: In order to reduce global warming, should we regulate family size just as we regulate carbon emissions?

(Image via Ryan and Brian do the Crossword)

More From Mairi Beautyman on Huffington Post
The Top Five Most Popular New Year's Resolutions And How Being Green Can Help You Keep Them
Five Comics Giving (Anti) Environmental Messages
Six Ways to Cut down on Waste During the Holidays (and Avoid the Ugly Sweater)
Obama, Bring on the Green White House
Five Ways to Green Your Yoga Workout
More Loving for American Expats, Plus Six Green Reasons to Vote Barack Obama
Four Ways for a Stylish and Tasty Green Dinner Party
From the Olympics to Sears, Wearing Recycled Bottles Goes Mainstream
Clothing Made from Milk and Bottles Made of Paper? The Eco Design Revolution
Terrorists or Heroes? Sea Shepherd Fights for Marine Life
Does Terrorism Make us Travel Greener?