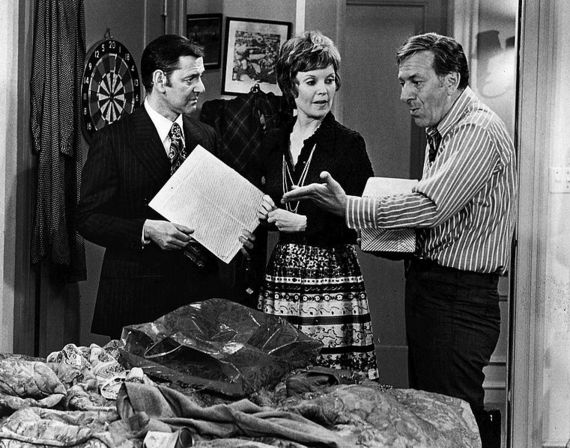 "Felix, these ratings are terrible!" (Image courtesy of Wikimedia Commons)

As it is "upfronts" season in television land, the New York Times Business Day section today is filled with stories about the TV biz.

On the front page there's a piece by Emily Steele and Sydney Ember titled "Networks Fret as Ad Dollars Flow to Digital Media."

Networks are nervous, Ms. Steele and Ms. Ember report, because revenues are down. And revenues are down because ratings are down, which is another way of saying viewership is down. Television viewing has dropped 9 percent this year so far (and we are just getting started).

And why is viewership down?

To explain the drop, some industry executives and analysts point to the rapid increase in the amount of time people spend watching Netflix and other streaming alternatives.

Well, that could be one explanation.

People are indeed going to Netflix and other live-streaming alternatives, mostly because the content is so good (not to mention available when you want to see it). But let's stick with the first part: the content.

The article does not mention a whole lot about content -- in fact, next to nothing. It is filled with references to the exploding world of online digital video -- Vine, Snapchat, YouTube... and of course the killer, Netflix.

Netflix viewing accounted for about 43 percent of the decline in traditional TV viewing in the first quarter of this year, according to MoffettNathanson.

Ironically, I found the answer to my question about the quality of content on the very next page (or, more properly, page 3), for there was a full-page ad taken out by CBS extolling their content. "America's Most Watched Network Wins Again," they said.

And what do people watch on CBS?

Man, this speaks volumes about why the networks are in trouble -- right there in an ad that CBS itself paid for. (And I am willing to bet a full-page ad in The New York Times is not cheap!) Look at the list!

The Big Bang Theory is now in its eighth season. That's pretty long in the tooth for a TV show. Their no. 1 drama? NCIS, now in its 12th season. (I think this is now older than MASH). Their no. 1 "new" show? NCIS, now in its 12th season. (Oh, yeah, it's NCIS: New Orleans! I forgot.) Their no. 1 "new" comedy? The Odd Couple. The last time this was on, Richard Nixon was the president of the United States. No one under 45 years old was even alive when The Odd Couple aired the last time. Is it any wonder that the bulk of their advertising is for Depends and Dentu Creme? And, finally, 60 Minutes. That one first aired in 1968, making The Odd Couple look absolutely cutting-edge.

So no more agonizing about "digital," please.

If you want to know where your viewers are going, you might check the cemetery.