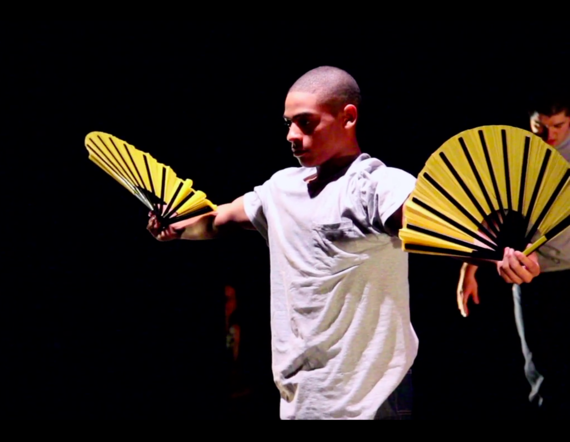 An incarcerated teen performs as Odysseus

The boys shuffle in from the bright Isla Vista heat outside, eight teenagers (or "campers") dressed in the navy blue polo shirt, slacks, and black-and-white converse sneakers that constitute the uniform of the juvenile detention center a few miles outside of town. I've never seen the campers like this: downcast, angry. Some shake their heads and mutter. The rest of the Odyssey Project team is waiting for them in the black-painted studio theater: Theater Professor Michael Morgan, two stage managers, eight UCSB undergraduates, and me (the teaching assistant).

We haven't seen the boys for five days, which feels like an eternity. They were grounded on the way here last week. We received the call during class time: there was contraband on the bus. A serious offense for a young person in the correctional system; understandably, until the camp officers figured out who was responsible, none of the boys would be coming back. Over the weekend we held our breath, waiting for word from camp, missing their faces and voices already, wondering which, if any, would return to us. The shootings a block away in May left a hole in all of our hearts, and we don't want to lose anyone else -- in any way they can be lost. 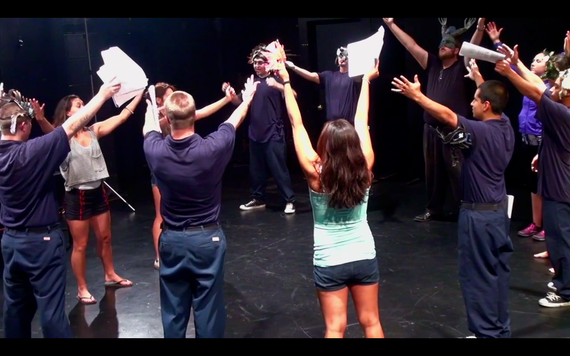 Word came from camp. Julio*, who really busted out with raw talent in the Cyclops mask last week, feigning sleep in big rises and falls of the shoulders, bellowing when Odysseus's men "poke" the big plaster eye so it fell out trailing by red ribbon -- Julio, whose handwriting was so beautiful I almost wanted to call it drawing, was the one. He'd had drugs, and wouldn't be coming back.

A collaboration between a university theater department and a youth detention facility weathers these kinds of blows. A labor of love on all sides, from the young men in the system who commit to rather a daunting ensemble theater production -- replete with requirements of vulnerability and memorization -- to the UCSB students who commit to those young men, to the correctional officers who must accompany them on every trip to the restroom and make sure they don't have so much as a paper clip or an eraser when they board the bus for camp at 6 p.m.

And labors of love hurt the hearts of everyone involved, by virtue of stretching those hearts open. We miss the boys when they don't come. We don't know, truly, of their experience inside camp. We can only guess at the demons that threaten their own Odyssey: their efforts to change their path in their own homecoming from detention to the streets. We don't know, that is, until they begin to tell us, through goofy icebreaking exercises, through the pictures they sprawl on the floor alongside the UCSB kids to draw, and most of all through their creative writing, which forms most of the play's script for a thoroughly modern, many- and co-authored reinvention of Odysseus and his journey home. 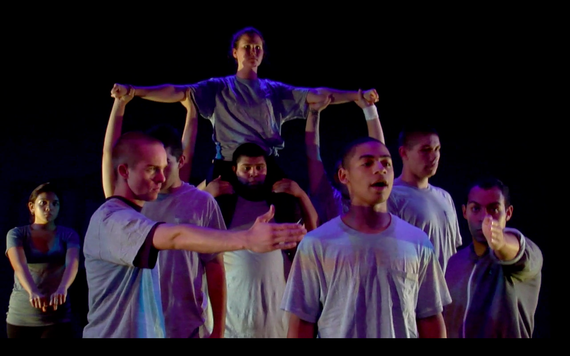 Last Thursday the UCSB students were listless, deflated by news that their new friends and classmates wouldn't be coming, until Shane came from downtown Santa Barbara to teach them how to play quartz singing bowls for the Underworld scene. Shane explained the healing properties of the sound bowls, lightly dragging a suede mallet against the pearly quartz until we could feel the hum in our chests. We were all sad because we wanted the boys to sit in the middle of that cocoon of vibrating thrum with us, and they weren't there.

Today, they are. After the boys shuffle in, downcast and isolated, the UCSB undergraduates, Professor Morgan, and I all circle up with them in plastic chairs. None of the boys will make eye contact.

Michael opens the floor to anyone who wants to talk. Silence, then a hand goes up.

"To be honest, some of us didn't even want to come," says Juan, a handsome youth who woke up with his arms restrained to a hospital bed last year after consuming four times the legal adult limit of alcohol. The last thing he remembers is heading home on his skateboard before it got too dark. "I have a court date soon."

"One of us did the wrong thing and all of us got in trouble," says Antonio, who wrote last week about a good friend who was found in a riverbed, shot in the head.

"We're kind of shutting down because they told us none of us could come back," says Juan. "We had all gotten in trouble until the one dude confessed."

"We missed you," says Morgan, "And we couldn't do much of the play with half the cast gone. And we're not telling you that to make you feel bad, but because we want you to see how significant you are, how much you matter."

Martín, who was gone for a few weeks because of negative behavior at camp, raises his hand. "I just want to thank you," he says to Morgan. "I'm really happy to be back. You see the goodness in us."

"I always see light when I look at you," Morgan responds simply. "Even if you're in a dark place, I see the light at the end of the tunnel. And you're that light, because all of you are stars." 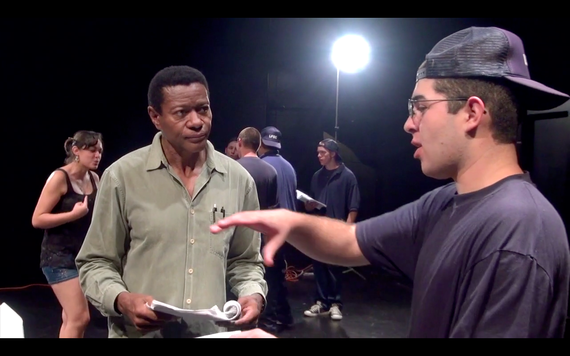 Professor (and Doctor) Michael Morgan hails from Harlem, and has taught everywhere from the Yale Repertory Theater to California Institute for the Arts to Nigeria. The Odyssey Project, now in its fourth summer, is his brainchild, began with seeing the film Shakespeare Behind Bars, and grew from a desire to extend the luxuries of a theater department in Santa Barbara to the young people who might blossom from its benefit the very most. On some days this summer during class, Mark Manning, documentary filmmaker extraordinaire whose credits include The Road To Fallujah, is there with a camera and a boom mike. The hope is that the film he makes of this summer's Odyssey Project will raise awareness of the plight of incarcerated young men of color and the school-to-prison pipeline, just as the Odyssey Project works in unprecedented ways to address that plight.

Because this is California, where the recidivism rate for youthful offenders is 76 percent. This is California, where as of 2012 the state annually spends under $30,000 on educating each student in the U.C. system and $65,000 to incarcerate each adolescent in the correctional system. (MSNBC's Ronan Farrow recently aired an "Art as a Tool for Education" segment with the actress Anna Deveare Smith, underscoring the priority these strategies for reaching youth are beginning to take in the national conversation around the school-to-prison pipeline.) Each one of the campers, all nine of them...then eight...now seven, is a young man of color, and as one of them put it in his writing recently: "once in the system, always in the system." Morgan combats this saying with one of his own: "To have a voice is to have a choice."

Morgan chose Homer's epic as the basis of the class's collaboration because the odds against which these young men battle are not unlike those faced by Odysseus. Julio, our lost Cyclops, succumbed to the very monster inside him that the Cyclops character itself is meant to illuminate. In Julio's case, the monster was addiction. Julio, we all understood, had listened to his sirens. The drug he was caught with is called "spice". Made by chemists and sold in the form of incense, spice has such a high potency of THC that it causes hallucinations and psychosis. Several of the boys -- all of whom are from gang-related areas, and most of whom don't have present fathers -- are in camp for spice. 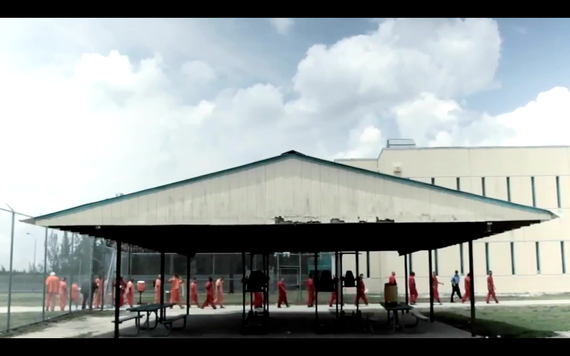 For example, during the "Lotus Land" exercise -- which began with students drawing and writing about euphoria and bad trips, and ended up as the scene in the play wherein Odysseus and his crew make a human machine out of their physical expressions of those pictures and words -- one of the slogans the camper Patricio came up with was "revenge of spice." Patricio repeats his words about spice's revenge while circling an arm and slapping his hands together. Next to him Jeff, an all-American UCSB economics major, repeats the words "dangerous euphoria," reaching for an invisible joint over and over. Around him flutters Yvette, a sweet new addition to the UCSB students from Kenya. "Not a care in the world!" she repeats, flapping her arms up and down. She flutters around Melinda, who thumps her chest, intoning, "Heart bursts into flame." It isn't until Martín joins Molly, bending over and flipping back up ("Can't wait for wonderland!" she says; "Dreams high in the sky!" he cries) and Kyle jumps in to follow Yvette in her little circles, flapping his arms and crying "I am a God!" that the boys' faces crack open into the smiles we spent five days missing. 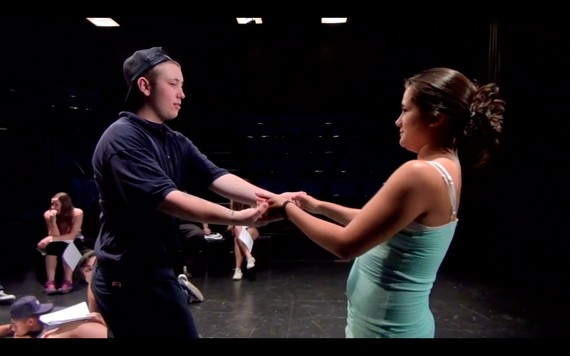 A camper and a UCSB student rehearse together

We finish up the segment before break by reviewing the Shipwreck Scene. All the students' bodies form the boat, they chant as they row, and then begin to recite the poem "Invictus", which ends with the lines "I am the master of my fate / I am the captain of my soul."

At the end of the day, everyone settles in clusters around the singing bowls. The UCSB students hold the suede mallets with the campers, hands touching hands, teaching them how to drag the suede mallet against the quartz for the Underworld Scene. In that scene, as the bowls sound out like wind chimes on a lazy, loving breeze, each actor stands up in turn to read their writing from the "fallen warrior" exercise: to speak in the voices of the spirits of the real-life crew members they lost. Juan wrote in the voice of a loved one who says to Juan not to worry: "I know you're darkest thoughts, and I want you to know I didn't feel a thing." "Instead of getting back with negative at someone who does something negative," Antonio's deceased grandfather advises him, "get back with positive at someone who does positive. Spread the love."

--The Odyssey Project production will go up at 2pm on August 3rd at Center Stage Theater in Santa Barbara, CA. While donations are accepted, admission is free.

--To support the documentary film being made about the project this summer, go here.

*Names and identifying details have been changed.